As I sit here I am well into the third trimester of my first pregnancy. While typing this introduction, I have had to “go” three times, and I have my feet propped up on two unused computer bags under my desk because by the end of the day my feet look like wonky balloon animals. Looking back at my pregnancy journey, I am aware of how fortunate I am to not have a physically demanding job and to have had a relatively healthy pregnancy – though not without its bumps (in addition to my one big bump) along the way.  I am also aware, however, of the unique challenges pregnancy poses to professional women. Women and their employers should be equipped to handle these challenges. That is what this post is for.

Much like pregnancy, this diary is going to be divided into three “blogmesters”:

Third blogmester: working while getting ready to deliver, maternity leave, and post-partum issues.

Some of you may think, Women have been getting pregnant since the dawn of time. Surely, both pregnant women and employers know how to navigate pregnancy in the workplace by now? Some do. But, some still don’t. Hence, the Equal Employment Opportunity Commission still felt the need to issue guidance on pregnancy discrimination in 2014 (modified in 2015) after the Supreme Court “pregnancy accommodation” decision in Young v. UPS). Some pregnant women are treated differently because their employer thinks they cannot handle the same workload they used to or that their priorities have changed; miss out on promotional opportunities out of fear they may not return; or are subject to extra scrutiny because they work more irregular hours due to doctor’s appointments or regular barfing breaks. It is important and helpful for employers and employees to know how to navigate the issues that come along with pregnancy in the professional workplace – from family planning to postpartum issues.

Now sit back, grab some pickles, prop up your cankles, and let’s talk about pregnancy in the professional workplace.

Family planning in the workplace

Some professional women enter into their careers with the plan that they are going to focus on their job first, then start their family a little later in life. Other women immediately look for the type of career that will be conducive to being a mom. (I recognize some women don’t want to have kids, and that is ok, too! I am just focusing on those who do for purposes of this post.)

Anne, a high-level executive who has a two-year-old son, told her manager she was trying to get pregnant. The manager reacted with displeasure, stating that the pregnancy might interfere with her job responsibilities. Two weeks later, Anne was demoted to a lower paid position with no supervisory responsibilities. In response to Anne’s EEOC charge, the employer asserts it demoted Anne because of her inability to delegate tasks effectively. Anne's performance evaluations were consistently outstanding, with no mention of such a concern. The timing of the demotion, the manager’s reaction to Anne’s disclosure, and the documentary evidence refuting the employer’s explanation make clear that the employer has engaged in unlawful discrimination.

Even if an employer is not ridiculous enough to act like the EEOC’s hypothetical manager, many professional women keep their family planning cards close to the vest. They are still likely to fear that they’ll be judged harshly or that they will be displaced by their peers who are single, childless, or have older children. Using the example above, when it comes to high-level executives like CEOs, discrimination laws prevent the employer from discriminating against them – but what about investors (if you are a CEO of a small start-up company that relies on them)? Also, does anyone remember when Sarah Palin was the Republican Vice Presidential nominee and news media outlets began publishing articles wondering how she was going to balance the VP post with her responsibilities as a mother? Similarly, Yahoo! CEO Marissa Mayer sparked a debate in the media when she took two weeks of maternity leave after giving birth to her first child in 2012. Therefore, you can see why some professional women want to hide their family ambitions from employers until they are actually pregnant.

Even when Ms. Mayer announced that she was pregnant with twins in September 2015 (her second pregnancy), she added to her happy news the statement that she would be “taking limited time away and working throughout” her pregnancy. You can argue this perpetuates the message that women have to go above and beyond to show they are not a business risk or weak when it comes to adding to their family. Notably, Yahoo! has a generous maternity leave policy; it provides its employees with 16 weeks of paid maternity leave. I have to wonder if Ms. Mayer’s abbreviated maternity leave had a trickle-down effect among lower-ranked executive employees. This is something for employers to think about – the kind of message sent to employees from the top down. Perhaps women leaders should encourage pregnant women (and expectant fathers) to make the best choice for them no matter which choice it is within the company’s policies.

Announcing your pregnancy at work 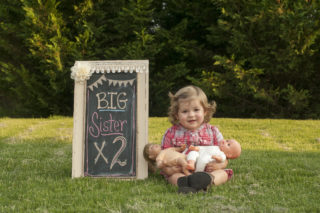 Now, on to the joy of the pregnancy announcement! This means you have managed to blame the first trimester belly bloat on eating too much or you have hidden it well (and if you’re asking yourself “what first trimester belly bloat?” I hate you), nobody has picked up on your morning sickness, and you’ve been able to stay awake all day at work. Congratulations! But it still doesn’t make the pregnancy announcement any less awkward to plan and carry out.

My own pregnancy announcement actually went very well. I was open with my employer about my family plans. So, when it came time to make the public announcement that I was in fact pregnant, everyone was over the moon for me and it was quite wonderful. Not everyone is this lucky though! See the below pregnancy-reveal story from another attorney as an example:

Telling my employer about my pregnancy didn’t go quite like I planned. I had a case management conference in federal court with my boss, a senior partner in our firm. At this time, I knew I was pregnant, but nobody else did. The judge asked me for a trial date that I could not do because unbeknown to her and everyone else in the courtroom, that was the month I was due. So, I told the judge that date didn’t work for me. She offered me another date two weeks later. Of course, that was no better. At this point, the judge was getting annoyed. I explained that I really couldn’t commit to a trial date for at least three months after the dates she was offering – that I had plans. She, of course, asked me what my plans were. So, in front of the judge, my boss, and the entire courtroom I had to explain that I was pregnant and due around the time of trial. The judge set the case for trial while I was scheduled to be out on maternity leave anyway.

Here are some tips for making the big announcement as positive as possible:

Then, after you tell your employer, focus on getting through the workday and feeling good! I recommend having stashes of crackers, Sprite, and your doctor-approved nausea medicine handy at all times. After all, there are few things as satisfying to a professional woman as holding down your vomit all day, kicking butt at the office, and growing a tiny human (or humans) all at the same time. We are awesome.