As an attorney, I am always aware that the way I conduct myself professionally reflects on how my law firm, my law school, and my fellow attorneys are perceived out in the world.  Who wants to be the cause of another lawyer joke?  Not me!  But being an attorney is not my only identity.  I also happen to be a woman, a mom, and a lot of other things.

Female attorneys are doing amazing things all over the place, but there is no question that stereotypes still haunt us at times.  Take for example the recent story about a lawyer who was sanctioned for telling his opposing counsel that raising her voice in a deposition was “not becoming of a woman.”  And I know plenty of female attorneys who have shown up to a deposition and been asked if they are court reporters or paralegals. 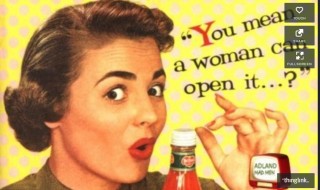 As it turns out, worrying about stereotypes can really mess with cognitive performance.  Imagine showing up for an important meeting, deposition, or presentation and discovering that you are the only woman or minority in the room.  You may begin to worry that others are making assumptions about you based on a stereotype and that you might do something to confirm their negative assumptions about you are right.  “They assumed I was not an attorney! What if they think I am too timid/too aggressive/not smart enough to be here?  What if they call me sweetie?  What if I get flustered when things get heated? What if I start crying?!!”

As it turns out, there is a name for the feeling that you may be at risk of confirming negative stereotypes about your social group.  It is called “stereotype threat.”  I first heard about “stereotype threat” on an NPR podcast called the Hidden Brain.  The podcast focused on the story of Annie Duke, a highly successful poker player who often found herself as the only woman at the poker table.  Even though she had fought her way to the final hand of the World Series of Poker: Tournament of Champions, which she eventually won, Duke still found herself questioning whether she really deserved to be there or whether she was only there as the token woman. 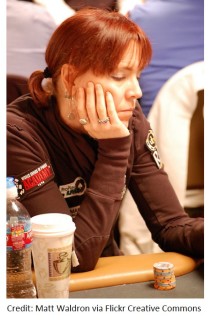 Social scientists and psychologists have found that stereotype threat can hinder performance in situations involving a stereotype-based expectation of poor performance.  When someone facing a difficult task uses valuable brain power to worry about negative stereotypes, it actually reduces the individual’s available cognitive resources, which in turn makes it more difficult to successfully perform the task at hand.  For example, stereotype threat has been shown to affect black and Hispanic students taking standardized tests, women taking math tests, and women MBA students engaging in negotiation tasks.  (Steele & Aronson, 1995; Gonzales, Blanton, & Williams, 2002; Spencer, Steele, & Quinn, 1999; Kray, Galinsky, & Thompson, 2002).  When women and/or people of color are a demographic minority in their workplace, they have an increased likelihood of experiencing stereotype threat.  Women have also been known to suffer a decline in performance when put in the presence of men holding sexist attitudes, so if opposing counsel keeps calling you “sweetie,” you could very well be affected by stereotype threat.  (Logel, Walton, Spencer, Iserman, von Hipple, and Bell, 2009). 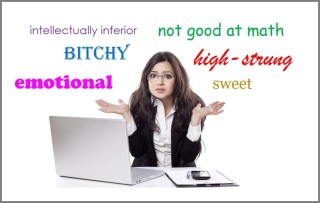 As companies continue to diversify and emphasize inclusiveness, hopefully negative stereotypes will begin to fade into the past.  Until then, however, there are numerous ways to overcome stereotype threat.  As a bonus, I think these suggestions would be helpful to anyone who is nervous about an upcoming difficult task like a presentation, meeting, a deposition, or even an important conversation with a supervisor.  So if you are not sure whether you are doubting yourself because of general nervousness or because of a possible stereotype threat, go ahead and give these suggestions a try either way: