My preemptive strike for Eugene Scalia

By Robin Shea on 7.26.19
Posted in Politics, Sexual Harassment

That article he wrote on sexual harassment was fine.

Yesterday, Politico had a post about a law review article written in 1998 by Eugene Scalia, President Trump's nominee for Secretary of Labor. The article had the dramatic headline, "Scalia's challenge: Fiery old writings in an era of #MeToo."

Uh oh, I thought. He must have written something dirty, or at least argued that sexual harassment should be legal. 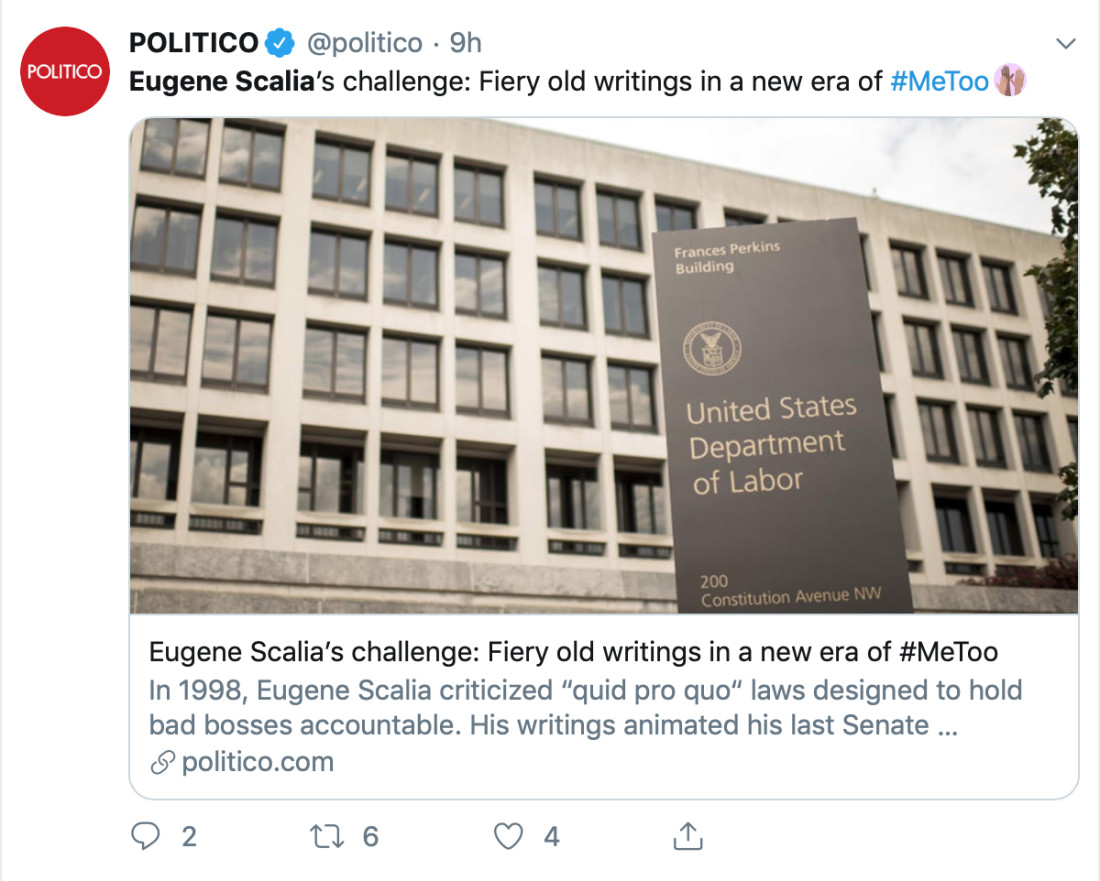 Once you got past the headline and blurb, though, the article -- by Ian Kullgren and Gabby Orr -- was pretty fair. It noted that Supreme Court Justice Ruth Bader Ginsburg, of all people, had defended Mr. Scalia, saying the article was “written with refreshing clarity and style. It is informative, thought-provoking, and altogether a treat to read.”

And a few paragraphs in, the Politico authors note, "In the essay, Scalia does not endorse leniency for harassers. But he does argue that quid pro quo harassment, the illegal practice of soliciting sexual favors in return for professional advancement, shouldn’t be distinguished from generalized harassment in the workplace."

Well, after that, I just had to go find Mr. Scalia's law review article, which wasn't linked in the Politico piece.

Because Mr. Scalia's article is likely to become an issue in his confirmation hearings, here is the gist. (I'm not linking to his article because I'm not sure I have the legal rights to do so. But at the end of the post, I will give you instructions on how to get it for yourself.)

"Quid pro quo" is Latin for "this for that." In the context of sexual harassment, it usually means one of the following scenarios:

Another kind of strange "quid pro quo" sexual harassment scenario is this:

In the 1990s, employers were usually found to be automatically vicariously liable for quid pro quo harassment by supervisors or other members of management. But if the harassment was of the "hostile work environment" variety, the employer was generally not liable unless it knew or had reason to know of the harassment and failed to take reasonable steps to end it.

Mr. Scalia's 1998 article argued that the distinction between quid pro quo and hostile work environment harassment was artificial and not analytically helpful. He did not argue that sexual harassment should not be illegal.

The most controversial part of his article was his argument that employers should not be vicariously liable for quid pro quo harassment because (I'm paraphrasing here) quid pro quo harassers are acting outside the course and scope of their employment. In other words, he thought the "knew or should have known" standard should apply to all types of sexual harassment claims. However, he said that the next best thing would be for employers to be vicariously liable for all workplace harassment by supervisors, in keeping with his opinion that the distinction between quid pro quo and hostile work environment was not meaningful or helpful.

The worst option, in his opinion, was to keep "the double standard" -- vicarious liability for quid pro quo harassment and "negligence" liability for hostile work environment harassment.

Mr. Scalia also cites respectfully and liberally (get it?) to Sexual Harassment of Working Women (1979), a book by feminist legal scholar Catharine MacKinnon.
There is one statement Mr. Scalia made that gave me pause: He said that calling a woman an "incompetent female b**ch" -- one time, without more -- would not be actionable sexual harassment. Applying today's standards, I would disagree -- especially if the person who said it was the woman's supervisor. But in 1998, I suspect most courts would have agreed with Mr. Scalia. (And apparently RBG was ok with it.)

Mr. Scalia's law review article really should be no big deal in his confirmation hearings, but that certainly doesn't mean our politicians won't do their best to use it against him.

Now, back to Ellerth: The plaintiff in that case alleged "quid pro quo" talk from a superior, but the superior never followed through, and the plaintiff was promoted even after refusing or ignoring his sexual advances. The Supreme Court established a new standard in determining employer liability for sexual harassment that we still follow today:

If the plaintiff suffered a tangible job detriment as a result of the harassment, then the employer is vicariously liable, even if the employer didn't know what was going on and had no reason to know.

But if the harassment did not result in a tangible job detriment (as was the case in Ellerth), the employer can defend itself from liability by showing (1) that it had taken reasonable care to adopt measures to prevent and promptly correct workplace harassment, and (2) that the plaintiff had failed to make use of those measures or otherwise avoid harm.

The easiest legal way I found to get the article was by subscribing for one day to Heinonline, a database containing, among other things, articles from law journals. For $29, you can have one day's access and up to five downloads. After you subscribe, log in, and click on "Law Journal Library." When you get to that page, click on "H," and look for Harvard Journal of Law and Public Policy. Click on that, and then click on Volume 21. Scroll down to "Issue 2-Spring 1998," and the first link you will see is "Strange Career of Quid Pro Quo Sexual Harassment, The" by Eugene Scalia. That's the one you want! You can download it as a pdf, email it to yourself, or choose from a number of other options.
Tags: Antonin Scalia, Burlington Industries v. Ellerth, Department of Labor, Eugene Scalia, Politics, Ruth Bader Ginsburg, Sexual Harassment, U.S. Department of Labor