An employer should never ask about disability or religion. Except when it should.

By Robin Shea on 10.3.14
Posted in Americans with Disabilities Act, Discrimination

Everybody knows that an employer should never, ever, ever ask an applicant about religion or disability until after a conditional offer of employment has been made. And maybe not even then. Right? 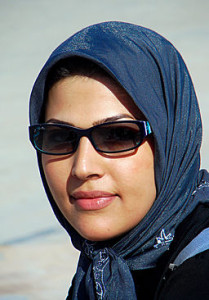 Well, mostly right. But, as a couple of EEOC lawsuits show, there may be times when you have to make an exception to this rule.

The general rule, of course, is that you don't get into these topics during the hiring process, and in fact it is usually against the law to get into these topics. But here are two situations -- admittedly, rare -- when you may be legally required to talk about religion or disability pre-offer.

1. The religion (or disability) is obvious to anyone with eyes to see, and it appears to disqualify the candidate. Last year, I blogged about EEOC v. Abercrombie & Fitch. The store had a "Look Policy" with a fairly strict set of rules about how store employees (called "models") were expected to dress at work. The policy prohibited anything on the head. Well, hair was ok, but that was it.

(Abercrombie has since amended its Look Policy to specifically allow for reasonable accommodations.)

One day, Samantha Elauf, a Muslim, applied for a "model" job at an Abercrombie's in Tulsa, Oklahoma, wearing a hijab (head scarf), which violated Abercrombie's "Look Policy."

The hiring manager made the assumption that Ms. Elauf was wearing her hijab for religious reasons but still gave her scores high enough to make her eligible for hire. However, when the hiring manager consulted with her boss about it, he told her to lower Ms. Elauf's scores so that she would be ineligible. Ms. Elauf was not hired, and she filed an EEOC charge, and the EEOC sued on her behalf and won summary judgment. Abercrombie appealed to the Tenth Circuit, which hears appeals from federal courts in Colorado, Kansas, New Mexico, Oklahoma, Utah, and Wyoming. The Tenth Circuit reversed and found in favor of Abercrombie.

According to two judges on the three-judge Tenth Circuit panel, Abercrombie didn't break the law because it didn't know whether Ms. Elauf was wearing her hijab for religious reasons (could have been cultural, the majority said), and didn't know whether she needed a reasonable accommodation to comply with the Look Policy. If Ms. Elauf wanted a reasonable accommodation, she should have asked for it, the majority said. I disagreed with the Tenth Circuit decision, and now please allow me a moment to dance in the end zone: 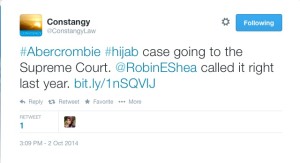 (DISCLAIMER: I am gloating only because I actually managed to predict something correctly.)

Yes, the U.S. Supreme Court agreed yesterday to review the Tenth Circuit decision. As I told Scott Flaherty of Law360 yesterday, the way the SCOTUS has framed the issue makes me think they may find in favor of the EEOC:

If I'd been the Abercrombie hiring managers, and if I had thought the hijab might disqualify Ms. Elauf because of the Look Policy, and if I wasn't sure whether she was wearing it for religious reasons, I would have asked her in the interview her reason for wearing the hijab. If she said it was a cultural thing (or that she wore it because it was cute, or because her head was cold, etc.), then I would tell her that she couldn't wear it to work. But if she said she was wearing it for religious reasons, I would have told her in the interview that the store would be able to accommodate the hijab, and I would not have penalized her in the scoring for needing to wear it. (And if there was any question about whether it was "cultural" or "religious," I would have given her the benefit of the doubt and assumed it was religious.)

Of course, it's always possible that the Supreme Court will agree with the Tenth Circuit, in which case you can ignore everything I just said.

According to EEOC guidelines on the Americans with Disabilities Act, the same principle applies when a seemingly disqualifying disability is obvious. Let's say you're hiring for a maintenance position, and an applicant who looked very qualified on paper shows up for the interview in a wheelchair. This appears to be an obstacle to the performance of a maintenance job, which would require the candidate to climb, crawl, lift, and do all kinds of other physical things. But you can't just "ignore" the wheelchair and then refuse to hire the applicant. Instead you are supposed to ask how he would perform the job, and at that point you may even end up talking with him in the interview about possible reasonable accommodations. If you can accommodate the disability, then you should hire the individual if he's the most otherwise-qualified candidate. If you reject him because no reasonable accommodation is possible (based on facts, not assumptions), then you should be on legally solid ground.

Suzanne Lucas, "The Evil HR Lady," has a great article in Inc. magazine that you may enjoy, "Your Former Employees Want a Reference, Here Is What Your Attorney Thinks About That," with feedback from me as well as my employment-law-blogging buddies Jon Hyman, Donna Ballman, Dan Schwartz, and Eric Meyer.

2. The applicant volunteers that he has a disability (or religious need) that you think may disqualify him from the position. Which brings us to the case of EEOC v. Howard University, which a federal judge in Washington, D.C., decided will go to a jury trial. This time we have Clarence Muse, an applicant for a campus security job who disclosed in his job interview that he had end-stage renal failure, and had to go for dialysis three mornings a week. (He was apparently able-bodied otherwise.) The university said that it required employees in the positions to work rotating shifts, but it wasn't clear that this was required on more than an ad hoc basis.

Anyway, after Mr. Muse mentioned his renal condition, the interview ended, and he was not selected. The university had conflicting explanations for rejecting him, but arguably it was because of his inability to work rotating shifts because of his dialysis appointments.

The university moved for summary judgment, saying that inability to work rotating shifts was a legitimate reason to reject Mr. Muse, and the court agreed that it could be . . . in theory. Unfortunately for the school, though, the EEOC had some evidence that Mr. Muse could have worked the schedule that the school actually required, and even could have adjusted his dialysis schedule as needed, exactly as he had done in his previous job which he had performed well and for which he had received kudos for always being available to sub for others. According to the court, the university should have followed up after Mr. Muse disclosed his condition by asking whether he would be able to handle the schedule, or how he would do it.

In other words, although it would have been illegal for the school to initiate a conversation about Mr. Muse's medical condition in the job interview, once Mr. Muse brought it up, the school could not reject him because of his condition without doing the necessary follow-up.

The same principle would apply if an applicant disclosed that she had religious beliefs that might present a problem performing the job.

So, there are two morals to this story: (1)  occasionally you really ought to ask about disabilities or religion in hiring even though 99.99 percent of the time you should not, and (2) notice how the EEOC just keeps rocking' along with these lawsuits.

OTHER CONSTANGY NEWS THAT MAY INTEREST YOU . . .

Good news/bad news/tons of news from our Affirmative Action group: VETS Final Rule Reduces Burden on Federal Contractors (yay!) and OMB Finally Approves New Scheduling Letter and Itemized Listing (boo!). Cara Crotty will also be presenting a webinar on the "bad news" from 2 to 3 p.m. EDT Wednesday, October 15. You can register here. Oh, and one more affirmative action publication on the way (probably first of next week):

Let's hope Cara gets some rest this weekend!

And it's not too late to sign up for Session 2 of our four-part webinar series on last year's Supreme Court employment and labor law decisions. This one, from 1 to 2 p.m. EDT, Thursday, October 9, will be on Hobby Lobby and the Religious Freedom Restoration Act.

Finally, I'll be presenting a webinar on Monday afternoon, October 6 (3-4:15 p.m. EDT) with Clear Law Institute on the new EEOC Guidelines on Pregnancy Accommodation. Registrations are still being accepted, and we'd love to have you!