EEOC performance in FY 2016: Is the Agency "mellowing"?

By Robin Shea on 11.18.16
Posted in Discrimination, Settlements

Was the EEOC more laid-back this past fiscal year than it was in FY15?

The U.S. Equal Employment Opportunity Commission issued its Fiscal Year 2016 Performance Report this week (here's the press release, in case you don't want to read all 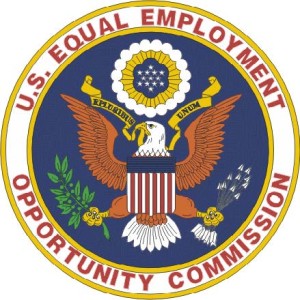 104 pages of the report), and the agency seems to have slowed down a bit, as compared with the prior year.

(The EEOC's fiscal year runs from October 1 through September 30.)

A kinder, gentler EEOC could be good news for employers. However, the lower numbers could also mean that the Agency is focusing more on the quality of its lawsuits than the quantity. The only thing worse than having to defend a frivolous lawsuit is having to defend one that isn't frivolous. So, maybe not so good, and bad if you happen to be the employer with the case that the EEOC considers "litigation-quality."

The EEOC promises that more precise statistics will be coming soon, but here is what they've reported so far that allows us to make a meaningful comparison of the two years. 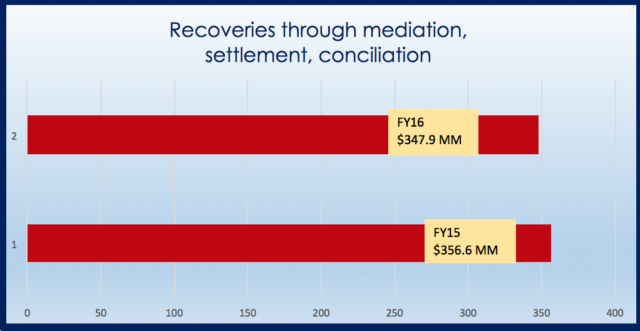 Huh. Less money through mediation, conciliation, and other settlements in FY 2016, even though there were more charges. Maybe that means the EEOC was more willing to take employers to court? 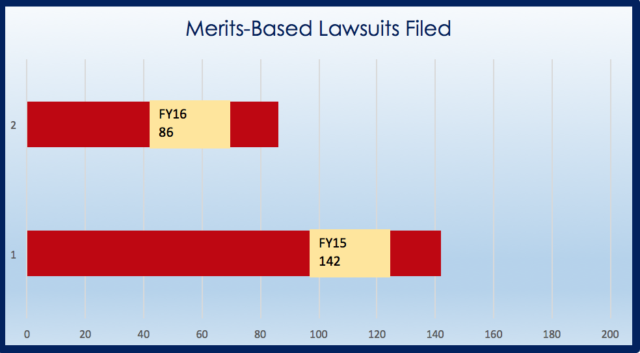 Guess not. There was a significant decrease in the number of "merits-based" lawsuits filed in FY 2016. But maybe the EEOC was picking really good ones that would allow it to recover large amounts in court. 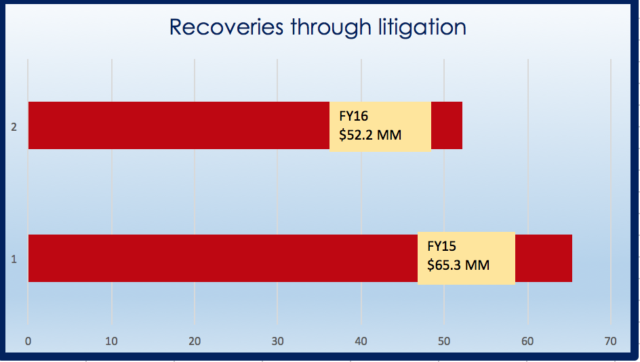 So much for that theory.

One other point that is important to note -- these declines are all pre-election. No telling what will happen by the end of FY 2017, after Donald Trump has been in office for about eight months.

EEOC Commissioner Victoria Lipnic spoke at a Bar Association meeting that I attended in October -- before these numbers were released -- and she said that in 2010 the EEOC was filing approximately 400 lawsuits a year. She could not explain why there was such a dramatic decline in recent years but said that the EEOC lawyers would attribute it to a more aggressive defense bar. Heh.

Commissioner Lipnic, who is a Republican and was U.S. Assistant Secretary of Labor for Employment Standards under President George W. Bush (and whose name has been floated as a possible Secretary of Labor in the Trump Administration), could be expected to have some disagreements with the general strategy of the current EEOC, and she does. As it relates to litigation, she told us that she believed the Commissioners should review EEOC lawsuits before they are filed to ensure that the lawsuits are meritorious.

Is "better quality" and "picking one's battles" what's going on here? I look forward to getting the rest of the charge-filing statistics when they are available so that we can make a better assessment.