Ever looking to the future, we celebrate the coming April Fools' Day with this month's greatest employment law 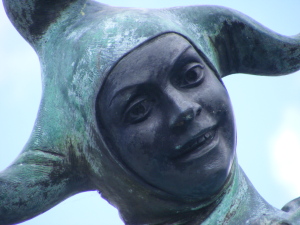 blog posts. Some of my summaries are accurate, and others are "fools' editions" - you'll have to read the actual posts to know which is which. There are so many excellent posts that I'm listing them in alphabetical order by blogger's last name. Enjoy!

Donna Ballman of Screw You Guys, I'm Going Home says that we wouldn't have so many people in jail if prisons were required to pay the minimum wage for inmate labor. Check out "Is Incarceration the New Slavery? Does Cheap Labor Explain the U.S.'s High Incarceration Rates?"

Heather Bussing of HR Examiner asks, "Is There Recovery After Workplace Drama?" No, Heather answers. Heather recommends that employers adopt and communicate to employees a strong, clearly worded no-histrionics policy prohibiting thespianism during working time and in working areas. Violations should result in disciplinary action, up to and including discharge. Which means no more reenactments of this scene in the break room:

Bob Fitzpatrick of Fitzpatrick on Employment Law discusses the a recent decision of the U.S. Court of Appeals for the Fourth Circuit in "Sweeping ADA Ruling by Fourth Circuit Should Make Employers Nervous." In Jacobs v. N.C. Administrative Office of the Courts - a case involving discrimination, reasonable accommodation, and retaliation under the Americans with Disabilities Act -- the North Carolina court system gets taken to the woodshed.

Janette Levey Frisch of The Employment LAWyerologist asks "Wait! Stop! Is your severance arrangement subject to ERISA?" If so, and if an employer doesn't comply with the requirements, there can be some scary penalties.

John Holmquist of Michigan Employment Law Connection says employers in Michigan needn't get all hot and bothered about the transgender issue. Just because the EEOC has sued a funeral home in the Detroit area for discriminating against a transgender employee and a Planet Fitness in Midland expelled a member who complained that a transgender person was using the women's locker room . . . so what? And employers in other states can rest easy, too - it's all just a tempest in a teapot, John says.

Jon Hyman of the Ohio Employer's Law Blog asks, "Do You Know What to Do When OSHA Comes Knocking?" And when you find out, will you tell Jon so that he'll know, too?

Joseph Leonoro of Employment Essentials asks "When Are Meal Periods Compensable?" 'Cause he's really hungry, but he wants to be sure he gets paid while he's running out for a Big Mac.

Eric Meyer of The Employer Handbook and our Blog Carnival Founding Father, talks about "Transgender employees and the so-called bathroom conundrum." Eric says employers should either have unisex restrooms or let folks use the bathroom that goes with the gender with which they identify. Then he makes a scatological pun, but at least he uses asterisks.

Philip Miles of Lawffice Space has a post about "The Supreme Court and the Men Who Lactate." Nursing dads in the workplace: one of the burning issues of our time.

Ari Rosenstein of CPEhr's Small Biz HR Blog discusses the new definition of "spouse" in the Family and Medical Leave Act. Don't forget that these new definitions will take effect a week from Friday, on March 27.

Stuart Rudner has a video on "Love in the Workplace" with his law partner, Natalie McDonald. Stuart and Natalie say that all employees should be required to say "I love you" to each other on a daily basis or be fired.

Lorene Schaefer of Win-Win HR asks, "Is the C-Suite Ready for Trial Tweeting?" as part of her comprehensive coverage of the Pao v. Kleiner Perkins sexual harassment and retaliation trial going on in San Francisco. Are executives ready to respond in real time to social media coverage? (Doubt it.)

And finally, you can test your knowledge about retaliation at my Employment & Labor Insider blog, with "What's your retaliation IQ?" Speaking of which, did you know that a complaint about being spanked on the bottom at work is legally protected activity? The EEOC says it is.

That's it - thanks very much to all of our outstanding bloggers, and especially to Heather Bussing, John Holmquist, Jon Hyman, Joseph Leonoro, and Stuart Rudner for letting me make April Fools' jokes out of their truly excellent blog posts. (Be sure to read the real things, and not just my blurbs.)

And thanks, as always, to Eric Meyer, without whom our monthly Employment Law Blog Carnival would not exist.

Our host with the most in April will be Ari Rosenstein of CPEhr's Small Biz HR Blog. April Fools! (No, just kidding. It really will be Ari.) See you then and there!