By Robin Shea on 1.20.16
Posted in Employment Law Blog Carnival

We are non-partisan here at Employment & Labor Insider, but that doesn't mean we can't look forward to the Iowa Caucus. (DISCLAIMER: This Employment Law Blog Carnival is guaranteed obsolete in two weeks, if not sooner.) 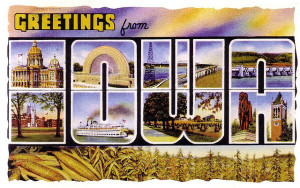 Ring in the Old!

On February 1, Hawkeyes will gather at their precincts, hear inspiring speeches from the candidates' pitch men and women, and (if Republican) mark their old-fashioned paper ballots or (if Democrat) gather to be counted, bodily, in the corner of the room designated for their preferred candidate.

(It's a good thing "body counting" is the Democrat method - the Republicans would need an 11-cornered room. And that's not even counting the fringe candidates.)

And it's a good thing that we can "look back" at 2015! Donna Ballman of Screw You Guys, I'm Going Home tells us how her 2015 prognostications panned out. Stuart Rudner tells us about Canada's top 10 employment cases for 2015. Mike McClory of Bullard Employment Law Edge gives us his favorite blog posts for 2015, and Lorene Schaefer of Win-Win HR tells us how California Institute of Technology pulled off a "textbook" handling of a Title IX complaint.

It wouldn't be a "Caucus edition" without some voting. Here's a poll:

The correct answer is "Supreme Court decision in Young v. UPS," only because the competition was so weak. (Hey, that's what they said about the 2016 Iowa Caucus, te-he.)

Now that we've finished looking back at 2015, we can look ahead to 2016. At the Iowa Caucus, even though they're still voting by paper ballot or by body count, they've adopted an app that will allow precinct captains to enter the vote counts more easily and feed the results to headquarters and the media. (Don't worry about cheating - this app has two-factor authentication, and it automatically flags suspicious-looking results. I'm sure it will be fine.)

And in that same future-looking spirit, we have Jon Hyman of the Ohio Employer's Law Blog with "What Star Wars Teaches Us About Employee Relations." Meanwhile, Eric Meyer of The Employer Handbook and father of the Employment Law Blog Carnival (he's our George Washington), tells us to resolve to treat employees with consistency. And Allison Williams of Know How has 16 resolutions for employers in 2016.

Time for another poll!

The correct answer, of course, is "Whether Ted Cruz will be able to live with the knowledge that Bristol Palin doesn't respect him."

Love it or hate it, you have to admit that Election 2016 has been interesting, what with the ascendancy of Donald Trump and the surprisingly successful campaign of Bernie Sanders, not to mention the struggles of Jeb Bush and Hillary Clinton. Why, politico and commentator Ned Barnett thinks Iowa and New Hampshire don't even matter. He calls them "politics'  own Kardashians -- famous because they're well-known, rather than for any innate value they bring to presidential politics." (Burn!)

So, perhaps 2016 is a year in which we should expect the unexpected. In that vein, I wrote about "Why the EEOC believes Title VII bans sexual orientation bias," and Mike McClory has a post on the intersection of state and federal medical marijuana laws.

The correct answer is "Do we have trouble, right here in River City?" Of course we do!

Sorry - could not resist.

Welcome to the Big Tent!

The Des Moines Register reports that politicians are aggressively courting the kinds of people who don't bother to show up for the Caucus. The don't-usually-shows are expected to be heavily in favor of Trump on the Republican side and Sanders on the Democratic side.

And, speaking of inclusion of people who aren't always full participants, we have some good posts on the Americans with Disabilities Act and Family and Medical Leave Act. Bill Goren talks about whether prison laborers are covered under the ADA. Randy Enochs of the Wisconsin Employment & Labor Law Blog discusses whether an employee who is fired after taking three times as much FMLA leave as she's entitled to has an "interference" claim. And Mike McClory has two: a post about Steve Sarkisian and his alcoholism/disability lawsuit against the University of Southern California, and one on who pays for a fitness-for-duty exam that is mandated by the employer.

The correct answer is "yes."

And here's our last poll of the day:

Trick question! There are two correct answers. One is obviously, "Defending a wage-hour lawsuit because you weren't up to speed on the latest DOL regs, or guidelines related to use of independent contractors." Janette Levey Frisch of The EmpLAWyerologist has one on the ever-fascinating subject of misclassification of Sleepy's and Uber drivers. Phil Miles of Lawffice Space has "DOL adopts bright-line rule." Doug Hass of The Day Shift has two: why employers should pay employees their wages on time, and how the Fair Labor Standards Act applies to inclement weather policies.

And, in case you'd like to know just how closely the DOL is watching, Doug Hass has this handy summary of the DOL's enforcement statistics for 2015.

Bob Fitzpatrick has a post on an interesting case in which a "promise-not-to-seek-reemployment" clause in an FLSA settlement was struck down by a court.

The second correct answer is obviously "Being an employer in the State of California." Fortunately, Andrea Paris helps us out: A 2016 checklist for California employers, and what individuals hiring home caregivers need to know about California law.

(Although hotel rooms in Des Moines really are expensive during the Caucus - $900 a night. Yikes!)

Oh, I almost forgot - in the interests of equal time, allow me to mention the following candidates: Ben Carson, Chris Christie, John Kasich, and Carly Fiorina. (I hope I didn't miss anybody.)