Face the Bloggers: Employment and labor questions for the candidates (Ryan)

By Robin Shea on 9.27.12
Posted in Labor Relations

This week, several of us bloggers (Dan Schwartz, Donna Ballman, Eric Meyer, Jon Hyman, and I) will be choosing a debate question on a labor and employment law topic for each of the Presidential and Vice Presidential candidates.

DISCLAIMER: I have tried to ask an "adversarial" question of every candidate. Please don't be offended, and please be aware that my questions may or may not reflect my actual political views.

Congressman Ryan, you are from Wisconsin, where Governor Scott Walker has been trying to drastically cut back on the power of public-sector unions. (Although Gov. Walker recently expressed support for locked-out union NFL referees after a bad call by a replacement ref that resulted in a loss for the Green Bay Packers -- lol!) Just across the state line, Chicago Mayor Rahm Emanuel stared down the striking Chicago public school teachers (well, ok, he blinked a little), and you have expressed support for him. The 2012 Republican Party Platform, unlike the 2008 platform, does not expressly affirm the right of public- or private-sector workers to join unions and bargain collectively. The platform also enforses a National Right-to-Work Law, and a Secret Ballot Protection Act that would prohibit employers from recognizing unions in the absence of a secret-ballot election, among other measures.

Here is my question: Granted that a right to organize is implicit in right-to-work and secret ballot laws, and granted that the current National Labor Relations Board and public-sector unions have gone overboard during the current administration, do you believe generally in the right of private-sector workers to organize and collectively bargain? If not, do think that any alternatives are needed to ensure that private-sector workers are protected from exploitation and abuse? If so, what would those alternatives be? 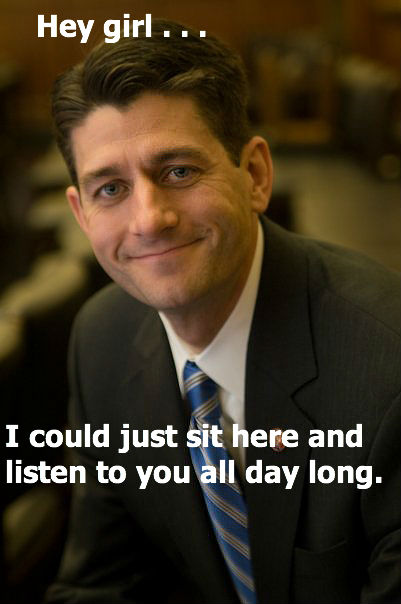 YESTERDAY: Vice President Biden, how will you ensure that the Employment Non-Discrimination Act will not infringe on the rights of employees to exercise their religion or express their religious beliefs?

TUESDAY: Governor Romney, what do you really intend to do -- specifically -- to limit government intrusion into the workplace?

MONDAY: Mr. President, why do we need the Paycheck Fairness Act?