Fair Pay and Safe Workplaces and its "executioner": The Congressional Review Act

By Kristine Sims on 3.15.17
Posted in Affirmative Action, Elections, Politics

The U.S. Senate has passed, 49-48, a resolution of disapproval of the Fair Pay and Safe Workplaces rule. The resolution of

disapproval passed the House in February, and we've reported on it here and here.

If the President signs the resolution, as is expected, then Fair Pay and Safe Workplaces will be dead.

The controversial rule, issued by the Obama Administration in August 2016, was based on a 2014 Executive Order by the same name.

In a nutshell, the rule required federal contractors and subcontractors bidding on any federal contract worth more than $500,000 (with the exception of a few commercial off-the-shelf items) to disclose "violations" of labor laws that had occurred in the three years leading up to the contract bid, and required post-award updates every six months.

Some (mainly Republicans) called it the “blacklisting rule,” and some (mainly Democrats) called it "necessary to discourage labor abuses" by ensuring that federal contracts don't go to companies that are guilty of “serious, repeated, willful or pervasive” violations.

The dispute has been moot since last October, when a federal judge in Texas preliminarily enjoined the rule. It's been on hold ever since.

Now that the rule is almost a thing of the past, it's interesting to look at the rule's "executioner" -- the Congressional Review Act. Enacted in 1996 as part of the "Contract with America" promoted by then-House Speaker Newt Gingrich (R-GA) and signed into law by President Bill Clinton, the CRA allows Congress to nullify regulations issued by federal agencies under certain very limited circumstances. Before this year, the CRA was used successfully on only one occasion: in 2001, Congress succeeded in using the CRA to repeal an ergonomic rule issued by the Clinton Occupational Safety and Health Administration. But now, a Republican Congress -- with a Republican President in office -- is taking aim at dozens of Obama-era rules and regulations. 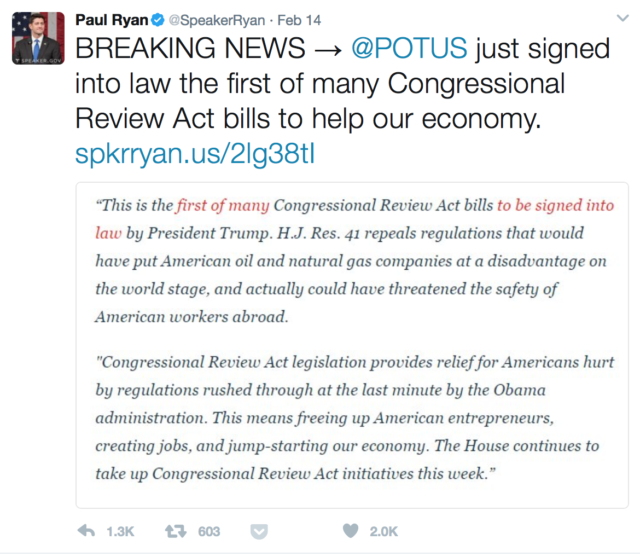 Under the CRA, Congress has to act fast: It has only 60 "session days" to disapprove of an agency rule. The resolution of disapproval must be signed by the President, or -- if vetoed -- Congress must have enough votes to override the veto. Once a rule is nullified under the CRA, a similar rule cannot be issued unless Congress specifically authorizes it afterward:

Does the end of Fair Pay and Safe Workplaces mean federal contractors can now freely violate employees’ rights? Absolutely not. First, the federal government already has suspension and debarment processes in place for federal contractors who are not following the rules of doing business with the government. Second, the agencies that enforce these "labor laws" -- including the National Labor Relations Board, the Equal Employment Opportunity Commission, the Office of Federal Contract Compliance Programs, OSHA, and the U.S. Department of Labor -- are still very much alive. Not to mention judges. And juries.