Hillary, or The Donald: A voting guide for employers

As our regular readers know, Employment & Labor Insider is a non-partisan blog. But with the first Presidential debate coming on Monday night, I thought it would be helpful to look at the two major presidential candidates and their positions on issues of interest to employers.

The following comes from each of the candidates' websites, supplemented by some news stories, with a dash of speculation and extrapolation from me. I do have one editorial comment, but it's based on the law, not the relative merits of the candidates.

I am covering the candidates in alphabetical order.

(Have I told you lately that we are non-partisan? Just wanted to make sure I got that point across.)

On many labor and employment issues, an HRC Administration would essentially continue the priorities of the Obama Administration. This would include Secretary Clinton's position on immigration, her expressed opposition to worker misclassification, and her expressed opposition to "wage theft and other forms of exploitation." She is opposed to right-to-work laws (laws that prohibit employers from requiring union membership or payment of union dues as a condition of employment). She favors pay transparency and advocates enactment of the Paycheck Fairness Act, which would make it easier for plaintiffs to bring equal pay actions, either individually or as class actions. 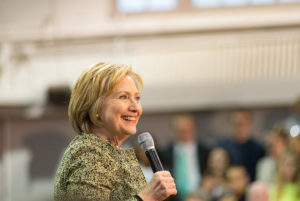 When she was a U.S. Senator, Mrs. Clinton was a co-sponsor of the Employee Free Choice Act, which fizzled out in 2010. That legislation would have required, among other things, "card-check recognition" of unions. In other words, if a union obtained signed cards from 51 percent of the workers in the applicable unit, the employer would have been forced to recognize the union without an election. Here's a 2007 letter from the U.S. Chamber of Commerce, describing (and opposing) the EFCA. Mrs. Clinton's campaign website notes her co-sponsorship and support of the EFCA. Just about every union that has endorsed a candidate has endorsed Mrs. Clinton.

Mrs. Clinton was initially in favor of the Trans-Pacific Partnership trade deal (as is President Obama), but she has now parted company with the Administration and opposes it.

Mrs. Clinton is also in favor of raising the minimum wage to $12 an hour (and has no problem with state and local governments' establishing higher minimums). She favors requiring employers to provide 12 weeks of paid family/medical leave, I assume for all of the reasons that currently qualify under the Family and Medical Leave Act.

On equal employment opportunity issues, I would expect Mrs. Clinton to continue the current Administration's expansive interpretation of Title VII to include LGBT individuals, regardless of whether Congress actually amends Title VII. Mrs. Clinton has also expressed a desire to offer better opportunities for individuals with disabilities, but at the moment, the specifics are a bit vague.

Mr. Trump opposes the TPP and the North American Free Trade Agreement, entered into during the Administration of Bill Clinton. Mr. Trump's views on immigration are well known: In addition to "the Wall," he favors making E-Verify a national requirement, raising the prevailing wage for workers under the H-1B visa program (to make American workers more competitive with their H-1B counterparts), and requiring that employers hire (or, at least, try to hire) Americans before seeking to hire foreign nationals. 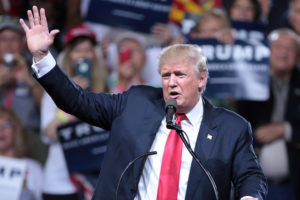 Mr. Trump has expressed support of right-to-work laws. Otherwise, his positions do not appear to be directly related to labor relations but aimed at preventing foreign workers from competing with Americans for jobs. We know of one union that has endorsed Mr. Trump, the National Border Patrol Council. Heh.

Mr. Trump said in July that he would favor an increase of the minimum wage to $10 an hour but thinks states should be able to vary from that. (I'm not sure whether he thinks they should be allowed to establish wages below the minimum.)

On the cutting-edge equal employment opportunity issues of our day, I suspect that a Trump Administration might be more "incremental" than, but perhaps not drastically different from, an HRC Administration. At the Republican Convention in August, Mr. Trump and his kids signalled support for LGBT rights, and one of the featured speakers was Peter Thiel, co-founder of PayPal, who is openly gay. I would not expect Mr. Trump to push hard for "traditional values" the way, for example, a Ted Cruz might have.

Editorial aside: Is Mr. Trump's maternity leave plan discriminatory or unconstitutional, as was recently claimed by Ilya Somin at The Volokh Conspiracy? I say not just "no," but "heck, no." As I understand Mr. Trump's proposal, the six weeks of leave would be immediately after the birth of a child. As all moms (and most people) know, this is the period of genuine physical disability for mothers who have undergone a normal, uncomplicated birth. (If the mother has a Caesarean section or has other complications, the recovery period will be longer.) As proof, check out this "first six weeks postpartum page" on WebMD. If you dare!

I don't know why an entitlement of paid leave - restricted to women, for a disability period that is unique to women - would be considered illegal or a violation of Equal Protection. Does that mean that the Nursing Mothers Act, which mandates "lactation accommodation," is also discriminatory and unconstitutional? (If Mr. Trump were to advocate granting paid "bonding" leave to women and not men, then Professor Somin's position might have merit, but I don't think that's what Mr. Trump is saying.) 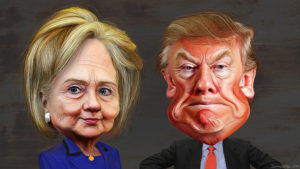 Want more? For an unfiltered view of the candidates', uh, views, here is Hillary Clinton's Issues page, and here is Donald Trump's Positions page. If you want more about the 2016 elections and the impact on employers, here is more from the Dan Schwartz of the excellent Connecticut Employment Law Blog: "Three employment law debate questions for Donald Trump" and "Three employment law debate questions for Hillary Clinton."