An article in Monday's New York Post discussed misunderstandings that can arise in the workplace based on use of "chat" apps and their associated emoji. A woman interviewed for 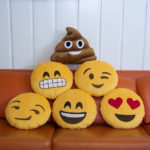 the article said that she had messaged her co-workers that she would be late for a meeting, and her boss replied with emoji of a "poop" (am I allowed to use that word on this blog?) and a clock.

She then messaged her co-worker to find out whether the boss was mad at her, and the co-worker replied, "Don't worry," followed by three banana emoji.

More confused than ever, the employee had to finally talk (the horror!) to the people involved to find out what the heck they meant. The boss's text was meant to demonstrate "bad timing." (I suspect his first choice of emoji was intended to represent a more colorful adjective than "bad.") The three bananas meant that everyone at the office at that moment was "going bananas."

If workplace communication through emoji is the next big thing, then employment lawyers on both sides are in for a bonanza. Using this particular woman as our example, she could claim that her boss's use of the "poop" emoji was bullying and created a hostile work environment, and who's to say it wasn't because of her membership in a legally protected group? Or that his sending her a picture of excrement was not extreme and outrageous, intended to cause and in fact causing, severe emotional distress? The co-worker's three bananas could also have been interpreted in an obscene manner, which -- coupled with the boss's emoji -- might satisfy the "pervasive" element of a hostile work environment claim.

Remember. You read it here first.

All of which got me to thinking . . . we really need some "universal" workplace emoji to prevent misunderstandings and litigation. Sort of like we do with the universal symbols for "bathroom," "no smoking," and my personal favorite, "bar."

Here are some ideas to get us started, using my plain old iMessaging emoji.

Seventy-seven cents on the dollar:

"You'll be hearing from my lawyer!":

This could be my greatest business idea since HR Horribles (collect 'em all!)!

Now you know why I had to go to law school.

Image Credits: Emoji pillows from flickr, Creative Commons license, by Wicker Paradise. Universal symbol for "bar" from AIGA, the professional association for design. The rest were screen shots by me.