In honor of Father's Day, a look at paid parental leave

Happy Father's Day to all of our readers who are dads, who have dads, or who love one or more dads.

As most of our readers know, there has been a movement -- for which most of the credit goes to Ivanka Trump -- to get some type of paid leave for new parents. The original proposal advanced by President Trump when he was a candidate was for six weeks of paid maternity leave. Presumably, the idea was that this would coincide with the period of actual postpartum medical disability for mothers.

But now the Trump proposal includes fathers, and it will also include new parents by adoption.

The restriction to mothers was criticized on a number of grounds, some without merit and some with. Among the meritless criticisms in my opinion was that exclusion of fathers would somehow violate equal protection under the law. Because mothers have actual biological limitations during the first six weeks after childbirth that fathers don't have, I do not consider this concern to be well founded. However, there are other arguments that do have merit -- most significantly, the need for fathers as well as mothers to bond with their babies (good for the dads, good for the moms, good for the babies, and good for society at large -- can't miss!), and the fear that paid leave for mothers but not fathers could perversely result in employment discrimination against women -- because they'd be too expensive to hire relative to men.

The study, conducted by professors at New York University and the University of Exeter in the United Kingdom, was reported in the May 31 edition of the Journal of Experimental Social Psychology.

Recently, the conservative-leaning American Enterprise Institute and the liberal-leaning Brookings Institution issued a joint report on the various leave proposals and made some recommendations. Ivanka seems to be giving the proposal her seal of approval, if this tweet is any indication: 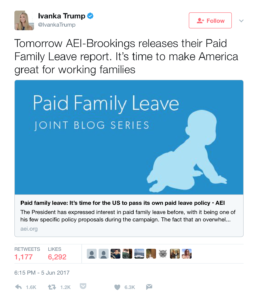 There aren't many specifics, but here is what AEI-Brookings proposal looks like right now:

Eight weeks, for both moms and dads. Mothers and fathers, birth or adoptive, would be entitled to a total of eight weeks' paid leave. The leave would be available to employees of small employers as well as employees of larger employers. Employers would be free to offer additional weeks.

70 percent of the employee's pay, up to $600 a week max. The government-funded compensation during the leave period would be 70 percent of the employee's salary, capped at $600 a week. (Presumably, employers would be free to add to this, too.) Rather than funding it through the unemployment insurance system, as the President proposed during his campaign (a method that has been criticized because the UI system is still strapped after the recession of 2008), it would be funded through a "small" payroll tax (OK, you guys, how small?) and budget reductions in other areas that would not hurt low-income people (OK, you guys, from where?). The intent is to have a budget-neutral effect.

A study. These are a couple of think tanks - what did you expect? Seriously, the authors have a good idea. They propose studying the effects of the paid leave program for unintended consequences, which could include discriminatory effects or "crowding out existing [family leave] plans."

We'll continue to follow these proposals and keep you up to date. In the meantime, dads, have an ice cold brewski on Sunday, and take a joyride around the yard in your John Deere Diesel Lawn Tractor Signature Series X750 with the 24 horsepower engine, power steering, and four-year/700-mile bumper-to-bumper warranty. (Not a product endorsement.)