By Robin Shea on 5.16.19
Posted in Discrimination, Politics, Safety

EEOC gets its quorum back, but OSHA loses.

I have good news and bad news.

Which do you want first?

Oh, let's start with the good. Janet Dhillon, President Trump's nominee for chair of the Equal Employment Opportunity Commission, was sworn in on Wednesday, so the EEOC officially has its quorum back. According to an EEOC press release, Chair Dhillon said,

In the more than 50 years since the EEOC was founded, the country has made great strides toward achieving the goal of equal opportunity in the workplace. Yet, unfortunately, the goal of a nondiscriminatory workplace has not been fully achieved. Notwithstanding the tremendous efforts of many, including those here at the EEOC, there continues to be unlawful discrimination in the workplace. This discrimination is illegal, economically counterproductive, and corrosive to the very fabric of our society.

As I've noted in previous posts, Chair Dhillon has extensive private sector experience (as general counsel for employers and working in a large law firm that represents employers), has indicated a preference for resolution of discrimination charges over litigation, and (we believe) opposes the initiative to collect compensation data in employers' annual EEO-1 reports, along with former Acting Chair and now Commissioner Victoria Lipnic.

That EEO-1 issue is out of the EEOC's hands now and in the hands of the U.S. Court of Appeals for the District of Columbia Circuit, but we hope that the new EEOC will at least seek to stay (suspend) pending appeal the orders issued on March 4 and April 25, which directed the EEOC to collect the compensation data. If the government moves for a stay pending appeal, and if it is successful, employers would not have to submit the information, which is currently due on or before September 30.

(As I have noted before, that's a lot of "ifs," so employers should assume the September 30 deadline will stay in place.)

Now the bad news. Scott Mugno, the President's nominee for head of the Occupational Safety and Health Administration, has withdrawn from consideration, just before he was expected to be confirmed by the Senate. The reason for his withdrawal was not clear. It sounded as if he was tired of waiting, but with his confirmation vote imminent, it seems like a weird time to pull out. 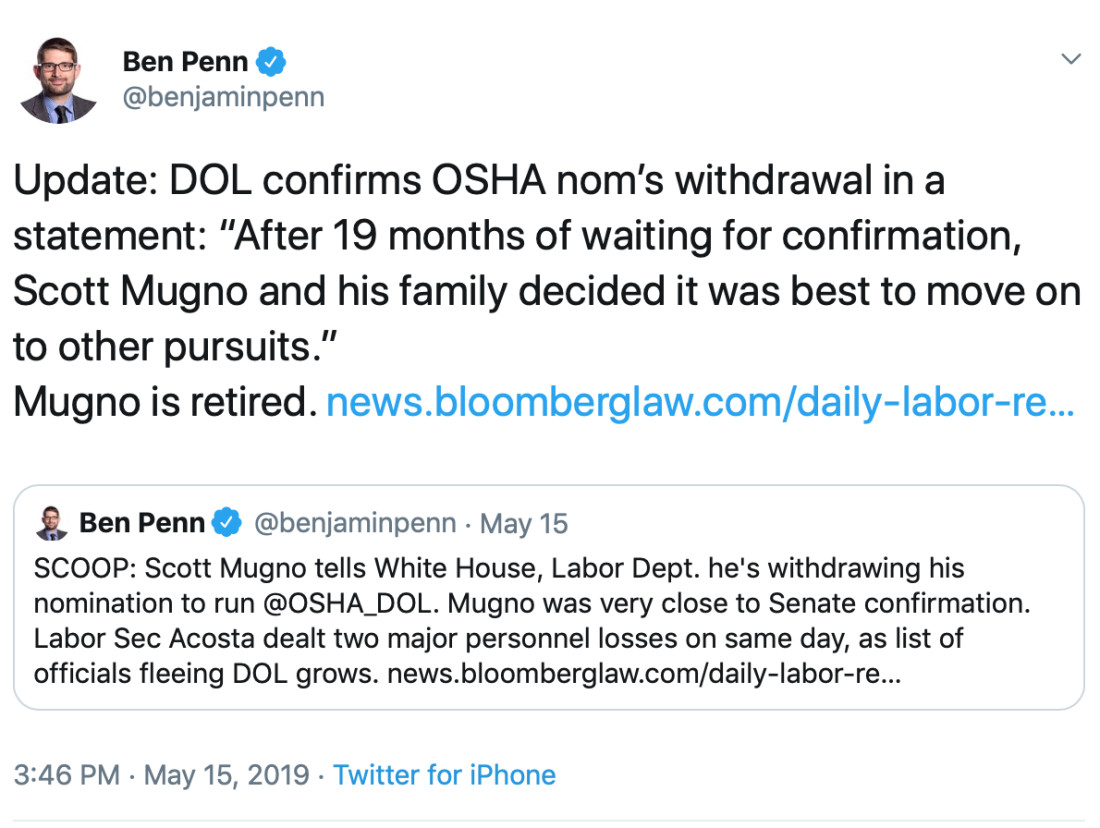 Loren Sweatt, who has been acting administrator of OSHA, will keep on keepin' on until further notice.