By Robin Shea on 11.15.19
Posted in Discrimination, Harassment, HR

The always-excellent Walter Olson of Overlawyered laments that the employment world is so heavily regulated that an employer can get in trouble for failing to act when a Millennial uses the relatively mild insult "OK Boomer" to respond to an older co-worker. 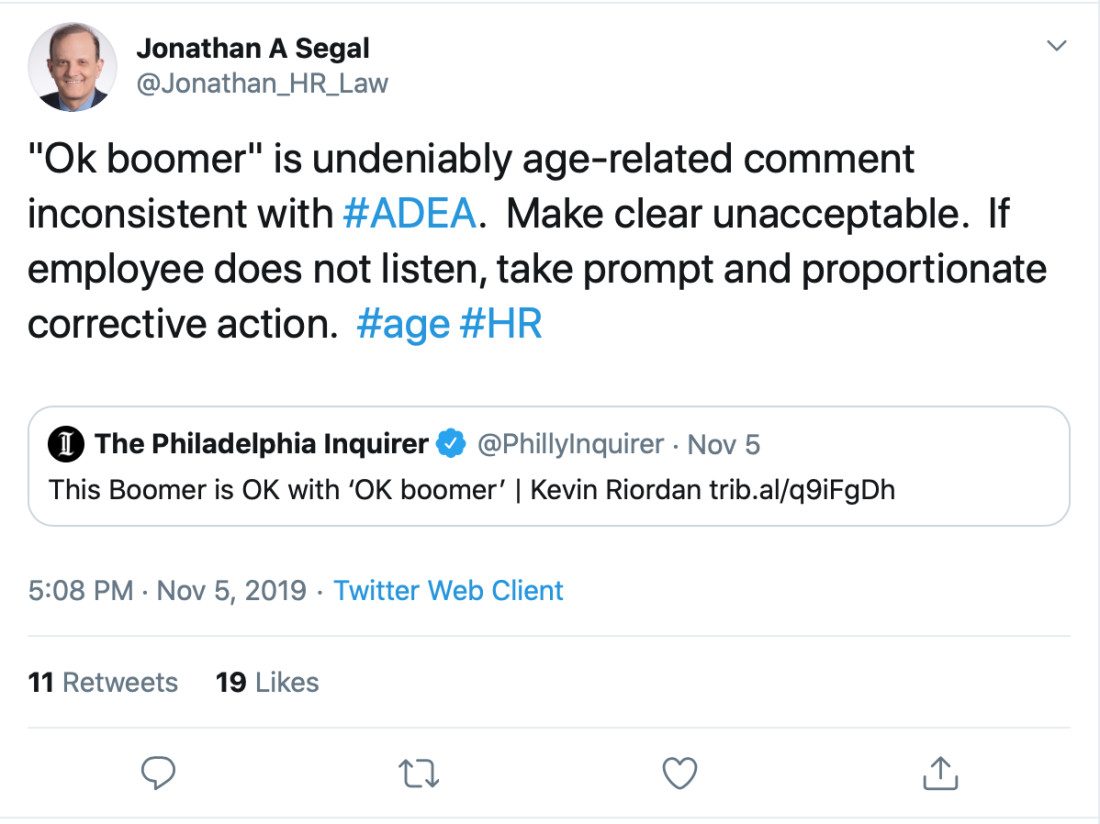 The responses to Jonathan's tweet tickled me, although they got to be redundant after a while:

I'm a Boomer myself. I think "OK Boomer" is funny.

I've also been amused by the "OK Boomer" controversy. Some Millennials apparently don't know what a "Boomer" is. [Insert joke about the abysmal state of modern education here.] A Baby Boomer was born between 1946 and 1964, meaning someone between the ages of 73 and 55. But some Millennials are using the expression with anybody who is older than they are, which could include Gen Xers, Depression-era babies, and the World War II "Greatest Generation."

For example, 88-year-old William Shatner (born in 1931, if my math is correct, and therefore probably some Boomer's father) was recently an "OK Boomer" target: 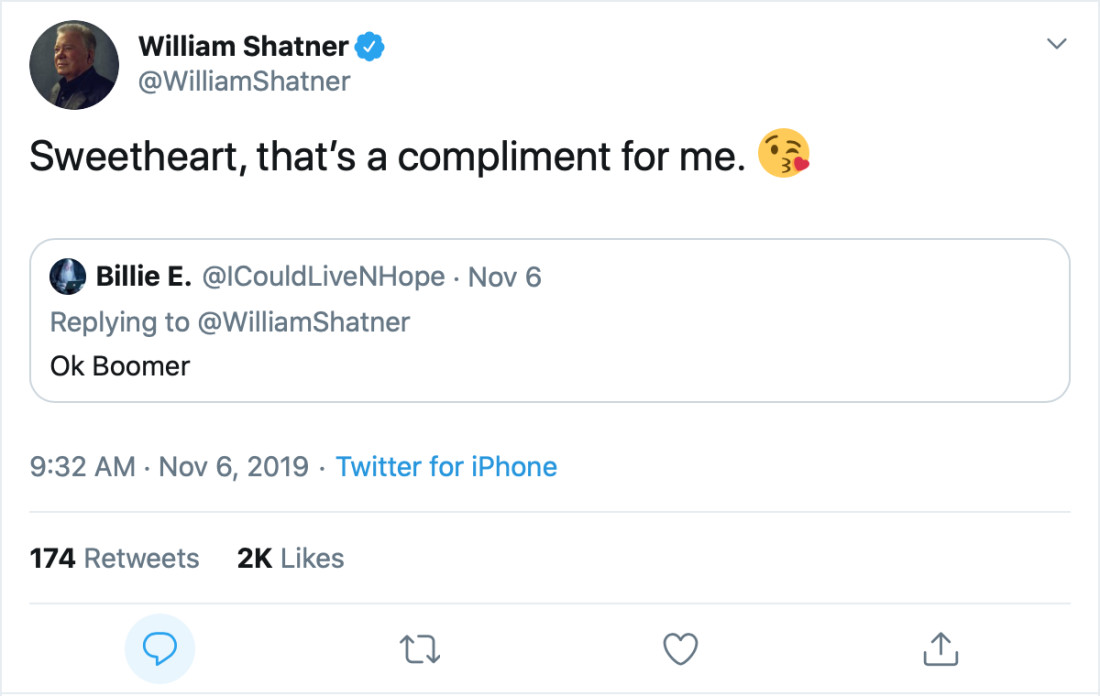 Boom. (I really need to start following him.)

Oh, yeah. Yes, it did. Jonathan and Walter are both right, in my opinion. My heart is with Walter. Our world is getting crazy when such a mild insult can result in employer liability for age discrimination or age-based harassment. But my employment lawyer's head is with Jonathan. Employers, if you find out that a younger employee responded to a protected-age-group employee with "OK Boomer," you will probably have to act. (Walter recognizes this, as well -- he just thinks it's stupid that they have to.)

Here's what I'd recommend to employers:

"OK Boomer" is clearly an age-related insult, so if you learn that it's been said in the workplace, then you need to at least have a talk with the employee and let him know that comments like this are inappropriate. Also, document the fact that you did it, even if you think a formal counseling would be overkill.

But do consider the context. It's possible that both parties may have viewed the comment as a harmless joke. In that case, an oral caution should be plenty.

Another possibility is that the Millennial was provoked. Yes, it could happen! The Boomer may have been ranting about how poorly educated, spoiled, and unmotivated Millennials are. (I do not believe this, but we've all heard plenty of people say it.) The most civil retort the Millennial could come up with in the heat of the moment was "OK Boomer." In that case, I'd come down harder on the Boomer, even though the Millennial is not in the protected age group* and may still need to be counseled about making age-related comments in the workplace.

*The federal Age Discrimination in Employment Act protects people who are age 40 and older. It does not prohibit age discrimination against people under 40. However, there are a few state laws that protect everybody, young and old, against age discrimination. If you're in one of those jurisdictions, you'll also need to watch out for discriminatory or harassing comments made about young people. And, regardless of the law, it should be against company policy for anybody to make disparaging remarks about age. Any age.

Another possibility is that the Boomer was innocently rambling about his Dave Clark Five record collection, when the Millennial just couldn't take it any more and blurted "OK Boomer" to end the conversation. In that case, I'd lower the -- uh -- boom. Not only for the age-related nature of the comment, but also for the lack of respect it demonstrates. (The Millennial could always have walked away or popped in her Air Pods instead.)

And, of course, if the Millennial supervises the Boomer, a comment like "OK Boomer" should never be made.

"OK Boomer" could be a form of age-based harassment. A few weeks ago, I posted about an older employee who was getting grief from her younger co-workers because she used 5 x 7 index cards for a presentation instead of 3 x 5 index cards. Imagine a work environment where a 60-year-old is working with a group of younger employees, and every time he offers a comment or constructive suggestion, he gets, "OK Boomer." Probably followed by snickers. At some point, the constant "OK Boomers" could become severe or pervasive, and then we would have unlawful age-based harassment.

Remember my three rules about "over-the-hill" birthday parties, which can also apply to friendly age-based kidding in the workplace. I've been preaching this since long before "OK Boomer" became a thing. These rules apply only to good-natured teasing, not the cruel kind:

No. 1: Consider your audience. Some people are sensitive about their age, and some are not. Sensitivity about age is not necessarily correlated with actual age. If you must tease or make friendly jokes about age, do it only with the employees who have demonstrated that they are OK with it. (And don't assume they think it's OK just because they've never complained.)

No. 2: Consider the work environment. If your department is full of 60-year-olds who are teasing a 59-year-old about his age, then you may not have much to worry about. On the other hand, if the teasers are younger than the 59-year-old, the teasing is much more likely to be viewed as offensive.

No. 3: Generally, the older one gets, the less funny age-based teasing becomes. Calling a co-worker "old" when she turns 40 may may be funny as long as she isn't a model, athlete, or TV anchorperson. It becomes less funny when she hits 50, and not remotely funny from about age 55 on. (NOTE: Rule 3 should always be applied in conjunction with Rules 1 and 2.)