I presented a webinar this past Wednesday for the Clear Law Institute on the topic of pregnancy and lactation accommodation. As most of our readers know, many state and local governments are passing laws requiring that pregnant women be reasonably accommodated on the job rather than being forced to take medical leaves of absence until after the baby is born. And we are starting to see some case law on lactation accommodation. Since this is Mother's Day weekend, what blog topic could be better than pregnancy and lactation? I sure can't think of one!

PREGNANCY Pregnant women are protected under federal law, aren't they? 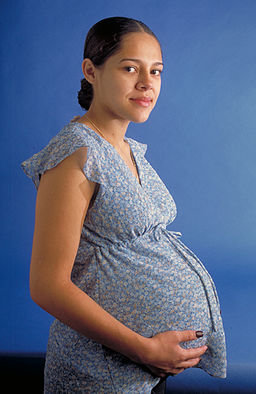 Yes. The Pregnancy Discrimination Act, passed in the late 1970's, makes it unlawful for an employer of 15 or more employees to discriminate against an employee because of pregnancy or a pregnancy-related condition. (The law amended Title VII.) However, the federal law does not require "reasonable accommodation" unless accommodations are provided to employees with other temporary, non-work-related conditions. The Family and Medical Leave Act also requires that covered employers* provide time off to "eligible employees"** as defined under the law for prenatal care or the birth of a child.

*FMLA-covered employers have 50 or more employees.

**FMLA-eligible employees work for a covered employer for a total of 12 months, and for at least 1,250 hours in the 12-month period preceding the date that the requested leave would begin.

In limited circumstances, a pregnancy-related condition (for example, preeclampsia or postpartum depression) could also be a "disability" within the meaning of the Americans with Disabilities Act, although the pregnancy itself is not. What's a "pregnancy-related condition"? Just about anything related to the conception, birth, or immediate post-birth of a child, including miscarriage and abortion. There is currently a split in the federal appellate courts as to whether lactation (the production of breast milk) is a "pregnancy-related" condition, but employers probably ought to treat it treat it as if it is. UPDATE (5/15/14): The EEOC and Houston Funding settled their lawsuit on the eve of trial for $15,000.

So, what's this thing about "pregnancy accommodation" that you are talking about? A number of states and some local governments (most notably, the City of New York) have enacted laws requiring that employers make reasonable accommodations to pregnant employees. Some examples of reasonable accommodation of pregnancy could include more-frequent breaks, relief from standing for long periods of time, telecommuting, and just about anything reasonable that would allow the pregnant woman to do her job.

Starting next week, Employment & Labor Insider will have a new look. LexBlog, our excellent blog provider and manager, will be switching over from the Movable Type platform to WordPress. The blog will look a little different (not radically so), and it will be easier for you to tweet and "Like" posts, and otherwise to share blog posts through social media. With the new platform, you'll receive only one email around 10 a.m. Eastern on Fridays, which will have links to all of my blog posts for the prior week. You will no longer be receiving an email notification every time there is a new post. (Since I almost always post on Friday mornings, you may not even notice this change.)

LACTATION Can you give us a quick lesson on the biology of lactation? Sure, and this will be helpful to know as we discuss "lactation accommodation." A day or two after a woman gives birth, her breasts start producing milk. (The first couple of days after the birth, they produce a substance called "colostrum," which is not the same as milk but contains all kinds of good things that give the newborn baby a kickstart in life.) If the mother doesn't nurse, her milk will dry up naturally, and that's that. But if she does nurse, her body will continue producing milk. A newborn baby has to nurse every 2-3 hours because its tummy is so small. As the child gets older, and as she begins eating solid food, the need to nurse gradually decreases. Eventually the mother can wean the baby off the breast, or the baby may wean herself. Of course, if mom goes back to "work outside the home," she is not going to be able to nurse her baby every 2-3 hours, right? So if she doesn't want to "dry up," she has to "express" the milk on the same schedule that she has to follow when she's there to nurse the baby. She can express milk by hand, or she can use a little pump device. Then she can save and store the milk in baby bottles, and take it home to give to Dad or the babysitter to feed the baby while Mom is at work. Either method of expression requires the mom's upper body to be "exposed." And it takes about 20-30 minutes each time, including preparation and clean-up/storage afterward. 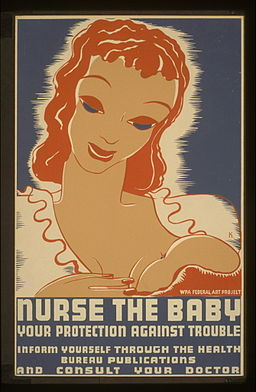 The U.S. government is a longtime advocate of breast-feeding.

What is "lactation accommodation"? "Lactation accommodation" is the cutesy name we give to the legal requirement that employers provide nursing mothers with a private, sanitary place where they can express milk during their work hours. The Affordable Care Act amended the Fair Labor Standards Act to require lactation accommodation. In addition, a number of state and local governments have laws requiring lactation accommodation. The federal law, called the Nursing Mothers Act, requires that covered employers provide unpaid "lactation breaks" to non-exempt nursing moms as often as needed, and for as much time as needed, to express milk. Employers must also provide a private location away from co-workers and customers, with a flat surface (so that the pump can be stable), and it cannot be a bathroom. Waiting periods for the lactation room are also frowned upon, although short delays are probably all right. Employers who have fewer than 50 employees, and for whom providing lactation accommodation would be an undue hardship, are not required to provide it. But the Department of Labor notes that BOTH of these requirements must be met and that the bar will be high for the "undue hardship" standard. The federal law does not require that nursing breaks be offered to exempt employees, but if they are, the employer cannot make deductions from the exempt employees' pay. This doesn't sound so bad. It probably isn't bad at all if you have an office environment, where there are plenty of private, clean places where a mother can go. But it's tougher in other work environments, including manufacturing or retail environments. Employers in those industries will have to work harder to create a suitable location, and retailers should be especially careful about protecting the mother from store surveillance cameras while she's expressing milk. What could go wrong? While preparing for my webinar, I accidentally came across a number of instances in the news where men were arrested for "peeping" at women who were expressing milk in the workplace. In one case, an IT guy put a video pen on the desk in the lactation room, and caught the mother on camera. In another case, a guy actually installed a video camera in the ceiling. Both of these men were fired and criminally convicted. In yet another case, a sheriff's sergeant offered his own office to a deputy who was nursing, and then allegedly hid video recording equipment under a baseball cap on his desk, directly across from where the deputy was expressing milk. The sheriff's sergeant was not prosecuted because of insufficient evidence, but the county ended up paying the mother a $200,000 settlement. 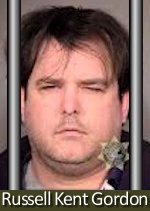 Employers need to act swiftly and decisively when they learn about this type of misconduct, and of course should fully cooperate with law enforcement. But mothers may also want to consider covering up with a blanket, just to be safe. Are there any lawsuits out there that we ought to keep an eye on? Yes. A big one is Ames v. Nationwide Insurance Co., now pending in the U.S. Court of Appeals for the Eighth Circuit, which hears appeals from federal courts in Arkansas, Iowa, Minnesota, Missouri, Nebraska, and the Dakotas. The plaintiff alleged that she quit under pressure after having had the worst first-day-back-from-maternity-leave ever. The company denied most of her key allegations. A three-judge panel of the Court affirmed summary judgment for Nationwide, but the plaintiff, with the help of the American Civil Liberties Union, has asked to have the case re-heard by the full court. If the full court agrees to hear the case, some of the issues will include the following: *Is lactation a "pregnancy-related" condition? (In which case, discriminating against an employee because of lactation would violate Title VII as well as the Nursing Mothers Act. This is the position that has been taken by the Fifth Circuit in the EEOC v. Houston Funding II case, linked above.) *Can an employee sue an employer for violation of the Nursing Mothers Act? (Right now, the courts are saying that the employee has to file a complaint with the U.S. Department of Labor, which can then go after the employer for a court order directing the employer to comply. Of course, back pay would not be recoverable because the break time is unpaid.)   To all you moms out there, happy Mother's Day! And to all you dads and kids, thank you -- we couldn't have been mothers without you!   Image credits: Video from Joel and Ethan Coen's Fargo (1996); other images except photo of Russell Kent Gordon from Wikimedia Commons. "Nurse the Baby" is a federal Works Progress Administration poster from 1938.