Pretty good year for the EEOC (in pictures)

By Robin Shea on 11.20.15
Posted in Class actions, Discrimination

Bloomberg BNA reports that the Equal Employment Opportunity Commission had a good year in FY 2015, which ended September 30. The agency collected more than $526 million in relief in all types of cases, involving federal as well as private-sector employees. If you have the ambition to read all 106 pages of the agency's report, please be my guest.

For the rest of us, here are some graphics that will give you the picture in a hurry. All of the monetary figures are in millions. You can click on the images to enlarge.

Keep in mind that the government shutdown occurred in October 2013, and the EEOC was under a hiring freeze from 2011 until the middle of fiscal year 2014. After the freeze was lifted, the EEOC hired 300 additional staff in the latter half of FY 2014.

Administrative (non-litigation) relief, mediation, conciliation in all types of cases, including charges filed by federal employees: 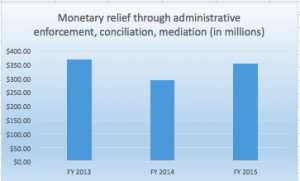 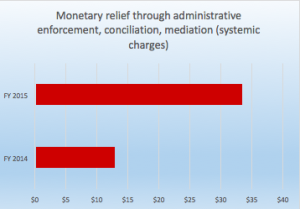 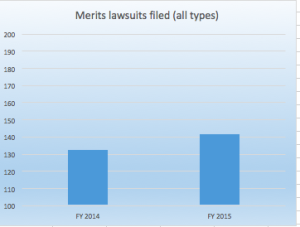 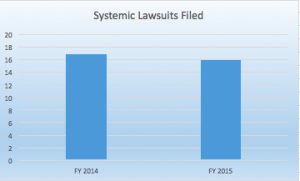 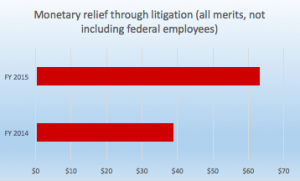 And, now the bad news for the EEOC. Its backlog of pending charges actually increased a bit in FY 2015: 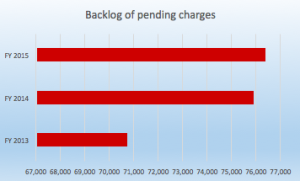 The agency will release statistics later that break these down by type of charge (for example, race discrimination versus sexual harassment, or failure to accommodate).

(Charts created by me. Can't you tell?)