It is impossible to deny the impact that Ruth Bader Ginsburg has had on equality for women and on the Supreme Court. 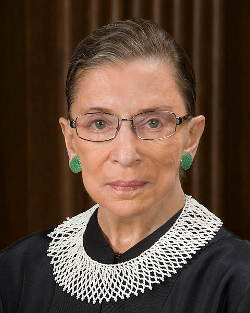 Whether one agrees with all of her positions, they were brilliantly articulated, and her opinions were a pleasure to read. Her voice will be missed.

This obituary provides a vivid illustration of the obstacles that Justice Ginsburg had to overcome as a female law student and lawyer before being sworn in as judge for the U.S. Court of Appeals for the District of Columbia Circuit and, finally, a Supreme Court Justice 27 years ago. And here is my personal favorite -- a 2015 article from the Los Angeles Times about Justice Ginsburg's close friendship with her nemesis in Court opinions, the late Justice Antonin Scalia. (According to the article, their love of vigorous debate -- and opera -- far outweighed their philosophical differences.) I like to think that RBG and Nino are happily mixing it up again in the hereafter.

We offer our prayers and condolences to Justice Ginsburg's family and loved ones.

(For today, at least, we will remain politics-free. However, we will be following the developments regarding the nomination of a successor to Justice Ginsburg.)