Six reasons why Hobby Lobby does not spell "doom" for women
7.3.14
Posted in Affordable Care Act 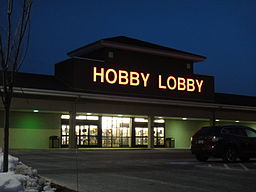 I was interviewed yesterday by Colin O'Keefe of LXBN-TV on the impact of the Supreme Court's Hobby Lobby decision, and I did a "quick and dirty" post on the decision the day it was issued. Since that time, the decision has been sharply criticized in the traditional media and on social media.

Here are six reasons why I think the decision is not the end of the world, even if you are strongly in favor of the "contraceptive mandate" in the Affordable Care Act.

1. The Supreme Court already ruled in 2012, in National Federation of Independent Business v. Sebelius, that the Affordable Care Act is legal and constitutional.

2. The Supreme Court ruled in 1965, in Griswold v. Connecticut, that states could not impose criminal penalties for the use of contraceptives. According to the majority, the right to make one's own decisions about whether to conceive children fell within a "zone of privacy created by several fundamental constitutional guarantees."

If you have tried to leave a comment for this blog in the past few weeks, please be assured that we have not been censoring or ignoring you. We had some technical difficulties with our new blog platform and were not receiving notifications when your comments were submitted. We just found a stash of older comments and published them this week. We apologize for the difficulty, and we believe we have the problem fixed so that it will not occur in the future. We love your comments and hope you will keep 'em coming!

3. Therefore, it was (and is) legal for the ACA to require that contraceptive coverage be provided by employers to employees without cost-sharing (that is, at no expense to the employee).

4. To qualify for the exemption created by the Religious Freedom Restoration Act as interpreted by the majority of the Supreme Court justices in Hobby Lobby, the employer's religious belief must be sincerely held. For years before the ACA was even a light bulb over somebody's head, the Hobby Lobby employers (collectively) had Christian codes of conduct for their businesses and closed on Sundays, taking the accompanying hit on revenues. Mr. and Mrs. Green, the founders of Hobby Lobby, frequently ran full-page newspaper ads proclaiming Jesus Christ as Lord. These were people who were serious about their faith. I have no statistics, but I feel sure that very few employers in America will meet this "sincerity" requirement, assuming they even care to do so.

5. Religion is not a monolith. "Free-for-all" is more like it. People of faith were sharply divided on the Hobby Lobby issue. The division didn't go away even after you narrowed down "people of faith" to "Christians." For example, among the Christian organizations submitting amicus ("friend of the court") briefs on the side of the Hobby Lobby employers were the Christian Legal Society, the U.S. Conference of Catholic Bishops, and the National Association of Evangelicals. Submitting amicus briefs on the side of the Government was a group of "Religious Organizations" that included the Catholics for Choice, the Disciples for Choice (a pro-choice group within the Disciples of Christ denomination), and the Methodist Federation for Social Action. And this is just the Christians. After you factor in employers who practice other faiths, and the vast majority of employers who do not consider religion relevant to what they do, it's pretty clear that the number of employers seeking a "Hobby Lobby" accommodation will not be significant.

6. But even with respect to that relatively insignificant number, the Court made it clear that their employees will still get contraceptive coverage. The Court did not say that employees will lose their coverage, or have to pay for contraceptives themselves. The Court said only that the government may have to provide the coverage instead of the employer -- without cost sharing -- via some sort of religious accommodation "workaround."* Which is reportedly being developed as we speak.

*The current "workaround" for religiously affiliated non-profit organizations is being challenged by a few organizations led by the Little Sisters of the Poor, an order of Roman Catholic nuns who operate charitable nursing homes. The Sisters say that the workaround still requires too much collusion on their part. In January, Justice Sonia Sotomayor, one of the dissenters in Hobby Lobby, granted the Sisters' request for a temporary stay while the case is being reviewed by the Supreme Court.

It's also worth noting that even the Hobby Lobby employers provided coverage for 16 of the 20 contraceptives approved by the Food and Drug Administration. They balked only at the ones that prevented a fertilized egg from implanting in the mother's womb, believing that this was the equivalent of an abortion. Admittedly, other employers may have a sincere religious objection to providing coverage for any contraceptives. But, again, there will be a workaround.

As the Supreme Court majority said, not every employer is going to be shielded from the obligation to provide employee benefits based on the Religious Freedom Restoration Act. They'll have to prove (1) that they have a sincere religious objection, (2) that compliance with the government requirement would be a "substantial burden," and (3) that there are less burdensome ways for the government to achieve its goals. That's a standard that few employers will be able to meet.

So, for those of you who disagreed with the Court's decision, it really is not the end of the world.

And have a happy Fourth of July!