By Robin Shea on 11.6.15
Posted in Discrimination

Wednesday night the Los Angeles jury hearing the age and disability discrimination case of former sports columnist T.J. Simers came back with a verdict in his favor of $7.1 million, consisting of retro and future lost income, and retro and future pain and suffering. (The jury did not award punitive damages.)

A spokesperson for the Los Angeles Times, Mr. Simers' former employer, said that the newspaper has already filed a notice of appeal, so it appears that this case is not over.

In any event, I won't be doing weekly posts on this case any more, so here are a few closing thoughts. I'll be back for any significant post-trial developments.

1) The case shows how risky it is to go to a jury. (Duh, Robin, like we didn't know that.) You may think it's just California, but do you remember when a San Francisco jury completely stiffed Ellen Pao not very long ago? So California juries aren't always pro-plaintiff. The problem for both sides is that you never know what any jury will do. According to one juror who was interviewed after the Simers trial, what he saw was that Mr. Simers had his "mini-stroke" (at age 63) in March 2013, and until that time had never received a bad performance review. Then, by the summer of 2013, he was being demoted and put on a contract. (Even though the "demotion" meant he would write two columns a week instead of three with no cut in his $234,000 a year salary, . . . well, I guess that is what you call a "constructive discharge." On some planet.)

2) Would some realistic performance reviews have made a difference? It sounds as if they might have to that juror. You can soft-soap your performance reviews if you want, but realize that when you are ready to terminate, you may have to issue an first-level counseling instead because you don't have any documentation to support a discharge.

3) I wonder whether the "ethical breach" that Mr. Simers allegedly committed was too obscure and complicated for the average juror to understand. As you know, it took me a long time to understand exactly what he did wrong. After it was explained to me, my own blog post on it was long and, I felt, fairly complicated, and I wondered how many readers would care to stay with me for that whole thing. The fact that the Times didn't have a simple reason for demoting Mr. Simers may have hurt it in presenting its side to the jury. It would have been a lot easier if he'd plagiarized his columns, or done something else that we can all understand.

4) The verdict illustrates the danger of tolerating an SOB for a long time and then suddenly cracking down -- especially if the crackdown takes place after the SOB is old, or sick. I'm not saying that Mr. Simers is an SOB - I don't know him. But there seemed to be a lot of evidence that he was high-maintenance, a sloppy writer, and kind of a jerk. The trouble was, it seems that he was always high-maintenance, a sloppy writer, and kind of a jerk. So why did the Times wait until he was in his 60s and after his "mini-stroke" to do anything about it? The answer, of course, was different management, a changing industry, and the alleged ethical breach, but to the jury it apparently looked like they didn't mind his "unique" personality until after he became old and disabled.

T.J. Simers, to put it bluntly, was a terrible columnist, embodying every cliche imaginable about the old, out of touch, cranky, hack of a print newspaper sports columnist. So what’s amazing about this story isn’t necessarily the $7.1 million verdict—though that’s crazy—but the surrounding details that came out during the trial. -- Kevin Draper at Deadspin.

Even so, if you don't take action with a difficult employee until you're fed up, then it may look like you had a unlawful motive.

Here are a few other comments about the verdict, from readers of the Defendant Los Angeles Times: 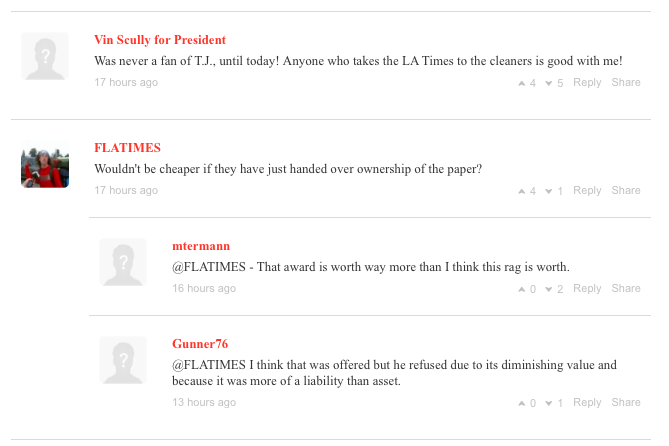 It appears that there are still a few people in Mr. Simers' corner. But, with $7.1 million in his pocket, what does he care?