It could be that the purpose of your life is only to serve as a warning to others.

In any event, that must be what the American Medical Association is thinking. The organization took it on the chin this week in a case involving the Family and Medical Leave Act. 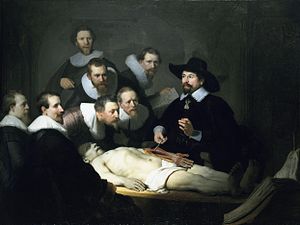 The case is well worth a post-mortem because of what it teaches employers about "causation" in retaliation and protected concerted activity cases.

Names have been changed to protect the allegedly* guilty.

*Even though the AMA lost a battle with this decision, it has not lost the war. The court found that summary judgment should not have been granted, but that means that the case will be tried before a jury. A jury might side with the plaintiff, but it might also side with the AMA.

The AMA, like just about every other employer, suffered from the economic downturn in 2008, and a manager -- we'll call him Dr. Pepper -- was told to reduce costs. Eventually it was determined that he was going to have to eliminate one position.

(One more disclaimer before I go on. Despite my fictional "doctor" names, none of the individuals actually involved in this case were physicians, as far as I can tell.)

Dr. Pepper chose an individual to eliminate -- we'll call him Dr. Seuss -- and sent an email to his boss informing her that he had chosen Seuss, and the rationale for selecting him. The gist of the rationale was that most of Seuss's work was going away anyway, so it made the most sense to eliminate his position.

Dr. Pepper's boss -- we'll call her Dr. Scholl -- sent him a reply asking whether the plaintiff, Dr. Dre, should have been eliminated along with Seuss. Pepper replied no, because he did not think it would be wise to eliminate any more positions than absolutely necessary. Scholl apparently was cool with this answer. This all happened in late October 2008.

So, we get to November 20 at a conference. Dr. Dre was there with Dr. Pepper. Dre told Pepper that he was going to have surgery on his knee in January, would be out of work for a few weeks, and was going to apply for short-term disability.

I hope you've stayed with me, because now it gets interesting.

Ten days after this conversation, on Sunday night of Thanksgiving weekend, Dr. Pepper sent an email to Dr. Scholl, apologizing for his "11th hour" change in decision, and telling her that he now wanted to eliminate Dr. Dre instead of Dr. Seuss. Among other things, Pepper said that they could more easily weather the loss of Dre because they were preparing for him to go out on disability anyway.

Poor Dr. Dre was terminated in January, and he hired a lawyer, and his lawyer sent a nasty letter to the AMA in February. The AMA's in-house attorney informed the organization's HR representative about the threatened litigation. We'll call the HR rep Dr. Bombay. (Nowadays, should that be Dr. Mumbai?)

It turns out that Dr. Bombay and Dr. Pepper had discussed the decision to terminate Dr. Dre back in November and that Bombay had taken handwritten notes. Upon learning of the threatened litigation the following February, Bombay typed up his notes and shredded his original handwritten notes, and he dated the typed notes "November 25, 2008," even though it was now February 2009.

It turned out that Dr. Pepper's calendar didn't show a meeting with Dr. Bombay on November 25, and Pepper didn't remember having had one. Even worse, he testified that he didn't decide to eliminate Dr. Dre until after that date. All this made Bombay's backdating look even more dishonest.

In May 2009, the AMA eliminated about 100 more employees, including Dr. Seuss, the person Dr. Pepper had originally planned to eliminate. Apparently this was enough for a district court to grant summary judgment to the AMA. (I know! I'm not sure how that happened, either.)

But the U.S. Court of Appeals for the Seventh Circuit, which hears appeals from federal courts in Illinois, Indiana, and Wisconsin, reversed, which means that Dr. Dre will be allowed to take his FMLA "interference" and retaliation claims* to trial.

So, let's make the usual Y-shaped incision and see what lessons can we learn from our "autopsy" of this case.

1. Timing is really, really important. On October 28, Dr. Pepper told his boss that Seuss should be eliminated, and he gave a good reason for the selection. He also told her that he thought it would be unwise to eliminate anyone else, and specifically Dre. On November 20, Dre informed Pepper that he would need to take FMLA leave in January. Within 10 days, Pepper reversed his RIF decision and recommended that Dre be eliminated instead of Seuss. Whatever Dr. Pepper's actual motive, this timing looks quite damning, doesn't it? The Seventh Circuit thought so, too.

2. Mentioning the FMLA leave in the poorly-timed email was not cool. In Dr. Pepper's "11th-hour" email, he said that the department could adjust easily to Dr. Dre's elimination because they were already preparing for his medical leave. Yes, I know there could be an innocent explanation for this: Pepper wasn't giving that as his motivation, he was simply giving his opinion about the effect of the decision. But this statement, especially when considered along with everything else, helps to make it look like the FMLA leave request was the reason for the selection.

3. Backdating documents is really not cool. Here's what I always tell clients: It's fine to document an event after the fact, even long after the fact, and I strongly recommend it if you didn't document at the time. But never, ever, ever, ever, ever, ever, ever in a million zillion years backdate it -- unless you are sure that the backdating is "transparent" (for example, drawing a line through the current date so that the original date is still visible, or saying something like "Created 10/22/11 based on event that occurred 6/1/11."). Any other kind of backdating looks dishonest and, as the Seventh Circuit noted, is more evidence that the employer may have had an unlawful motive and was trying to cover its tracks.

4. Destroying handwritten notes upon learning of threatened litigation (aka "spoliation") is the uncoolest of all. If you're not expecting litigation and don't have reason to expect it, then you can create a "draft" document and destroy the draft after creating the "final" version. But once you either become aware of litigation or have reason to expect it, your right to do this is gone. You must save all of your relevant documentation. Dr. Bombay, the HR representative who destroyed his handwritten notes after learning of the threat of a lawsuit, committed "spoliation," whether he realized it was wrong or not. As a result, when the case goes to trial, the judge may instruct the jury that the notes would have been favorable to Dr. Dre's case.

5. To err is human: be willing to cut your losses if you messed up, or if it will look like you messed up even if you didn't. In this case, it appears that Dr. Dre would have survived at the AMA only about 5 more months if Pepper had stuck with his original plan to eliminate Seuss in January. The undisputed evidence showed that the AMA had a massive reduction in May, and it probably would have included Dre if he'd still been around. Damages under the FMLA are limited to so-called "make-whole" relief (essentially, back pay, back benefits, costs and attorneys' fees, possibly doubled in the case of a willful violation). Even assuming the AMA might have been on the hook for a "willful" violation, it probably had a strong argument that it would not have owed much more than 10 months' pay to Dre, plus his costs and fees. Given that, it might have made economic sense for the AMA to have settled the case in mediation. (Please note that mediations are confidential, so it is very possible that the AMA tried to do just that.)

I was tempted to end this post with a rap about Dr. Dre, the AMA, the FMLA, the month of May, Dr. Bombay, and "anyway." Then I thought better of it. You're welcome.