By Robin Shea on 2.10.17
Posted in Elections, Immigration, Politics

Yesterday, a panel of the U.S. Court of Appeals for the Ninth Circuit denied the Trump Administration's motion to stay the temporary restraining order issued by a federal judge in Seattle. This means that the TRO, which blocks the temporary travel ban from taking effect, will remain in place. The Administration may seek review by all of the judges on the Ninth Circuit or by the U.S. Supreme Court, or it may go back to the court in Seattle for a full hearing on the legality of President Trump's Executive Order. This tweet last night from the President leads me to believe that option 3 is not likely: 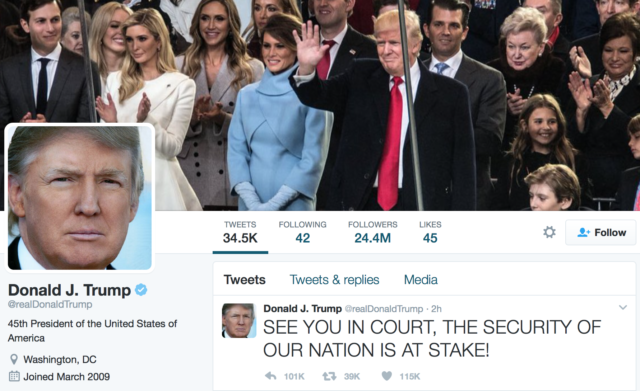 In other Trump-related news, the confirmation hearing for Andrew Puzder, President Trump's nominee for Secretary of Labor, has finally been scheduled for next Thursday, February 16. The hearing had been delayed several times while Mr. Puzder's paperwork was being submitted to the Office of Government Ethics, and then while the OGE reviewed the paperwork. The hearing should be a real donnybrook. Among other things, the mudslinging could include allegations of domestic violence (Mr. Puzder's ex-wife has since recanted those allegations), his employment of an undocumented worker (he has admitted to this but said he was not aware of her status and took immediate action once he learned of it), and the numerous -- possibly, politically motivated -- lawsuits filed recently against franchisees of CKE Restaurants, Inc., of which Mr. Puzder is Chief Executive Officer.