What's on the feds' regulatory agenda

It's all pretty good news for employers.

On Wednesday, the federal government issued its 2018 unified regulatory agenda, and the following items will be especially noteworthy to most employers:

*Joint employment. David Phippen of our Washington DC Metro Office has exhaustively covered the controversy over the National Labor Relations Board decisions in Browning-Ferris Industries, the subsequent temporary overruling of Browning-Ferris in Hy-Brand, and then the vacating of Hy-Brand because of Board Member William Emanuel's failure to recuse himself from the Hy-Brand case.

Rather than mess around with this any more, the Board has indicated in a press release (not part of the unified agenda) that it might issue regulations to address the joint employer issue rather than waiting for another case, which might create yet another recusal controversy. 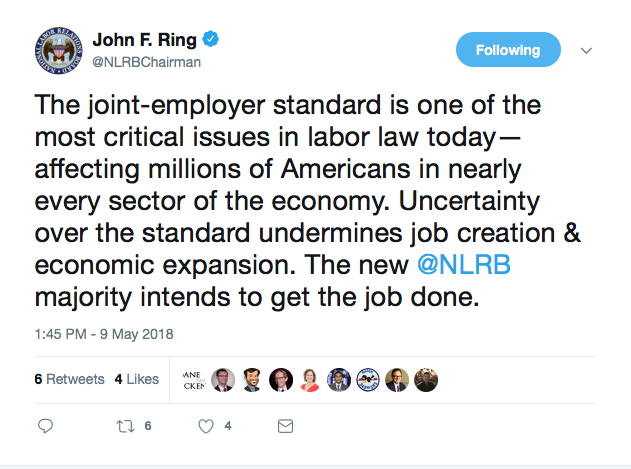 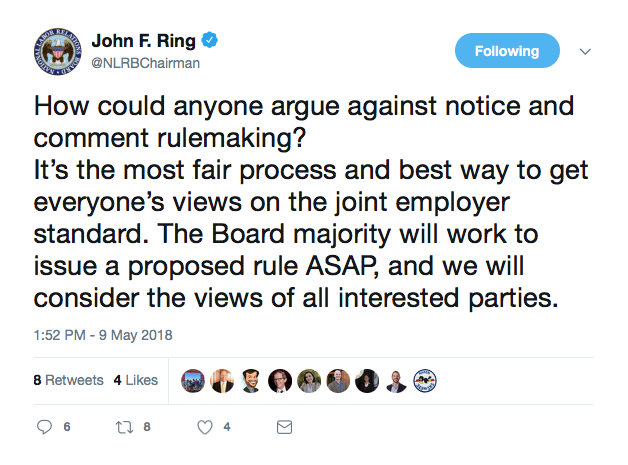 *Wellness regs in January 2019, probably. The Equal Employment Opportunity Commission has projected January 2019 as the date that it will issue new regulations related to wellness programs and the Americans with Disabilities Act and the Genetic Information Nondiscrimination Act. As I've previously written, a federal judge in the District of Columbia has vacated portions of the rules, which were issued in 2016. However, he delayed the effective date of the "vacation" until January 1, 2019, to allow the EEOC time to issue new regulations. President Trump's nominees to the EEOC have not yet been confirmed, and I suspect that is the reason that the EEOC can't act more quickly.

*Overtime exemption regs coming -- eventually? The DOL indicated that it will issue a Notice of Proposed Rulemaking on the salary level applicable to the Executive, Administrative, Professional, Outside Sales and Computer Employees exemptions to the overtime requirements of the Fair Labor Standards Act. The NPRM, which would replace the current Bush-era regulations as well as the Obama-era regulations that were struck down by a federal court in 2016, is expected in January 2019. The heads of our Wage and Hour Practice Group, Jim Coleman and Ellen Kearns, have been on this from the get-go.

*TRICARE relief! Cara Crotty, chair of our Affirmative Action and OFCCP Compliance Practice Group, has been following the actions of the Office of Federal Contract Compliance Programs on its oversight of TRICARE employers. Cara has the scoop here and here, with more to come.

*Electronic reporting of workplace injuries and illnesses. The Occupational Safety and Health Administration plans to rescind the requirement that employers electronically submit OSHA Form 300 data (log of work-related injuries and illnesses) and OSHA Form 301 data (injury and illness incident reports). Instead, employers with 250 or more employees (and who meet other criteria) would be required only to submit summary information (Form 300A). Our OSHA/Workplace Safety Practice Group has all the background you need to know.