A feel-good story about social media!

DOL official gets his job back.

It's not often that I'm able to use the U.S. Department of Labor as an example in an employment case, but we sure had a doozy this week.

Attorney Leif Olson moved his family from Texas to Washington, D.C., to take a position as Senior Policy Advisor of the DOL's Wage and Hour Division. He was one of those tasked with trying to get the Wage and Hour regulatory agenda moving, including final regulations on the executive, administrative, and professional exemptions to the overtime requirements of the Fair Labor Standards Act.

Mr. Olson started with the DOL on August 12, only three short weeks ago.

Last week, a reporter from Bloomberg Law found a Facebook post by Mr. Olson -- written in 2016, right after a Republican primary in which Rep. Paul Ryan (R-Wis.) annihilated his alt-right opponent by 70 percentage points.

Mr. Olson was happy about the outcome of the election, and he posted some content on Facebook ironically, using the "voice" of an alt-right supporter of the vanquished opponent, who is known for expressing anti-Semitic views.

Unfortunately, Mr. Olson failed to specifically say on Facebook that he was just being a smart aleck, although his commenters all seemed to get it, and one even complimented his "epic sarcasm," saying, "you speak sarcasm like it is your first language."

That was in August 2016. Last week, the Bloomberg reporter found the 2016 posts and comments, apparently missed the irony and thought he had a big scoop, and last Friday sent an edited version of the Facebook exchange to the DOL and asked for comment.

On Tuesday, September 3, Bloomberg ran an article with the headline, "Trump Labor Aide Quits After Anti-Semitic Facebook Posts Surface." The opening paragraph said, "A recently appointed Trump Labor Department official . . . has resigned after revelations that he wrote a 2016 Facebook post suggesting the Jewish-controlled media 'protects their own.'"

(As of yesterday, Bloomberg had removed "Anti-Semitic" from the headline and made other corrections to the September 3 article.)

Mr. Olson was not anti-Semitic. And here's the cool part. Soon after the Bloomberg article was published, there came a groundswell of social media posts -- from conservatives and Trump supporters, yes, but also from liberals, Mr. Olson's Jewish friends, and even Erik Wemple of the Washington Post -- all sticking up for Mr. Olson. The Anti-Defamation League, whose spokesman was quoted in the Bloomberg article as saying that the posts were "clearly anti-Semitic" and "virulently hateful," acknowledged by Tuesday afternoon that Mr. Olson was merely being sarcastic. 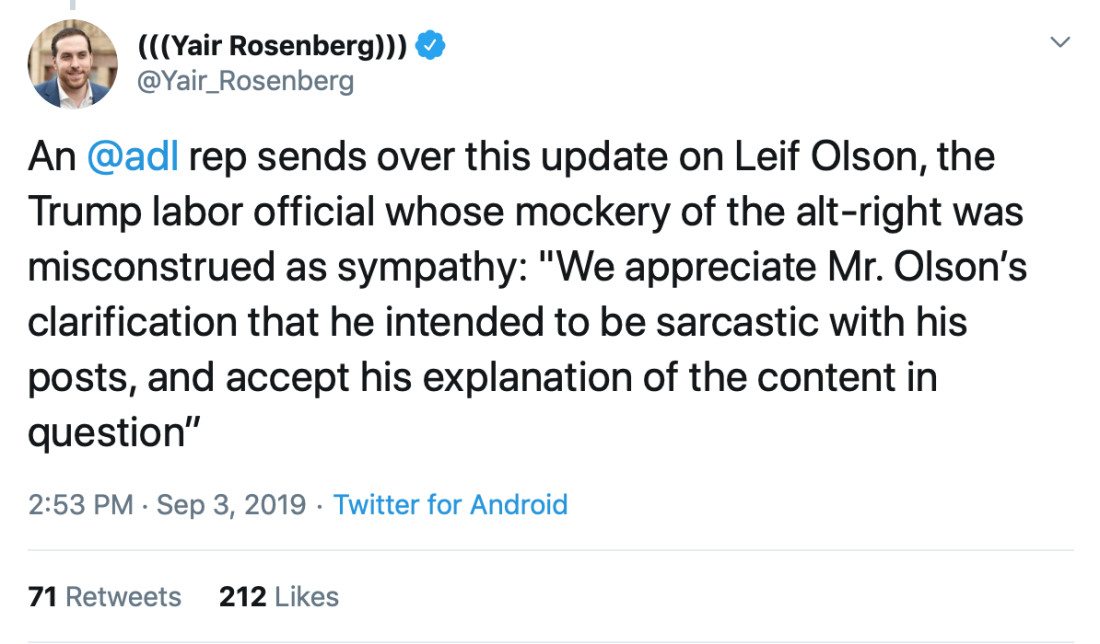 And on Wednesday night, the DOL announced that Mr. Olson had his job back.

My hat is off to all of Mr. Olson's defenders, and especially to those who did the right thing even though they don't support the Administration or its agenda. And also to the DOL, which rescinded the "resignation" promptly and publicly. 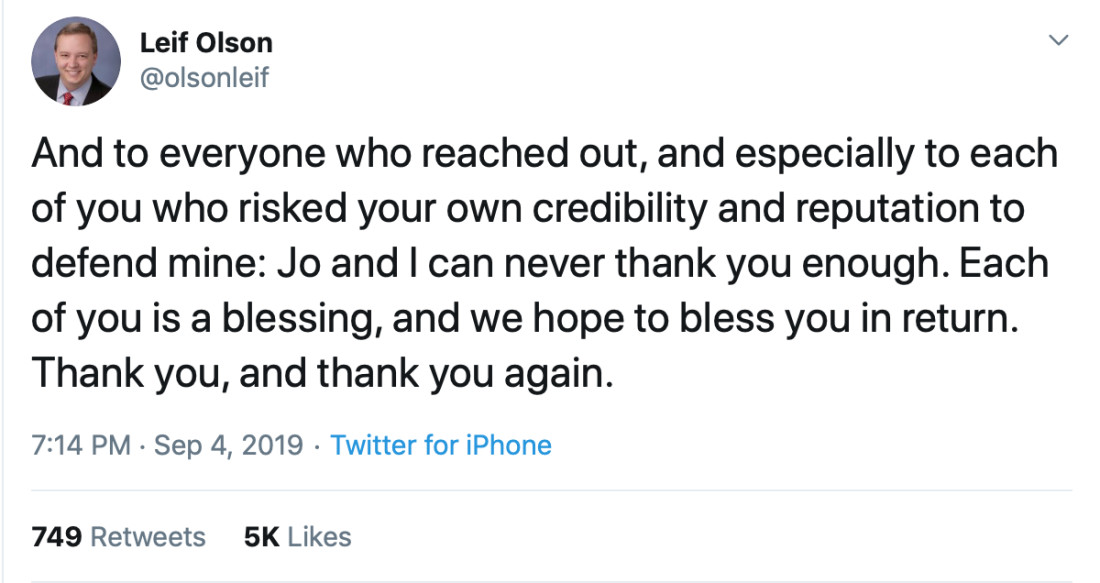 But this ordeal shows how important it is to watch what you say on social media, and how you say it. If you're kidding, or being sarcastic, be sure to say so. Even if your peeps understand what you mean (and that may not always be the case), there is no guarantee that someone coming upon it years later without the context will also understand.

And next thing you know, you could be out of a job.

Also, people who live in glass houses shouldn't throw stones. After the Bloomberg article appeared, some of Mr. Olson's defenders found an old tweet by the reporter that could be considered racist if not read in the sarcastic way the reporter seems to have intended it.

Finally, employers are under incredible pressure to fire employees who incite the social media mob. Employers, resist the temptation to act immediately. Try to wait until you have all of the facts, in their full context. But if you do react too quickly or overreact, follow the DOL's example (and Chipotle's) and be willing to reverse yourself.

In this case, "the social media mob" worked. How about that!