10 things for which this employment lawyer is thankful in 2018

What are you thankful for this year? Here is my list.

No. 1. Absence of drama. Admittedly, the political scene has had more than its share of drama, but from a labor and employment law standpoint, this year has been blissfully uneventful. The Equal Employment Opportunity Commission issued a Strategic Enforcement Plan that was extraordinary for its very ordinariness. Employers got an extended deadline for filing their EEO-1 reports without the pain of having to report their compensation data. My biggest problem this year has been coming up with material for blog posts because so little has been going on. As problems go, that's a good one to have.

No. 2. Various political developments, which shall remain unnamed. Because we're a non-partisan blog, I can't tell you which ones, but there were several developments for which I am particularly thankful. (I think there was a little something for everybody this year, so you can fill in the blanks as your own predilections lead you.)

No. 3. Right before Thanksgiving, an employer does the right thing. You probably read this week about Dominique Marie Moran, the manager at a Chipotle in Minnesota who was fired on Friday for refusing to serve a group of black customers unless they paid in advance. Outrageous!!! -- except that there was much more to the story. In fact, Ms. Moran had good reason to believe that the customers were going to "dine and dash" -- take their food without paying for it. In my opinion, Chipotle acted too quickly in terminating Ms. Moran, but to their credit, they rescinded the termination and publicly apologized to her once they had all the facts. (As of now, it isn't clear whether Ms. Moran will accept the offer of reinstatement, but at least the job is hers to accept or reject.) And in this case, social media got her fired, but it also seems to have been responsible -- at least, in part -- for getting her job back. Social media is a blessing and a curse, but since it's Thanksgiving, we'll focus on the "blessing" part. 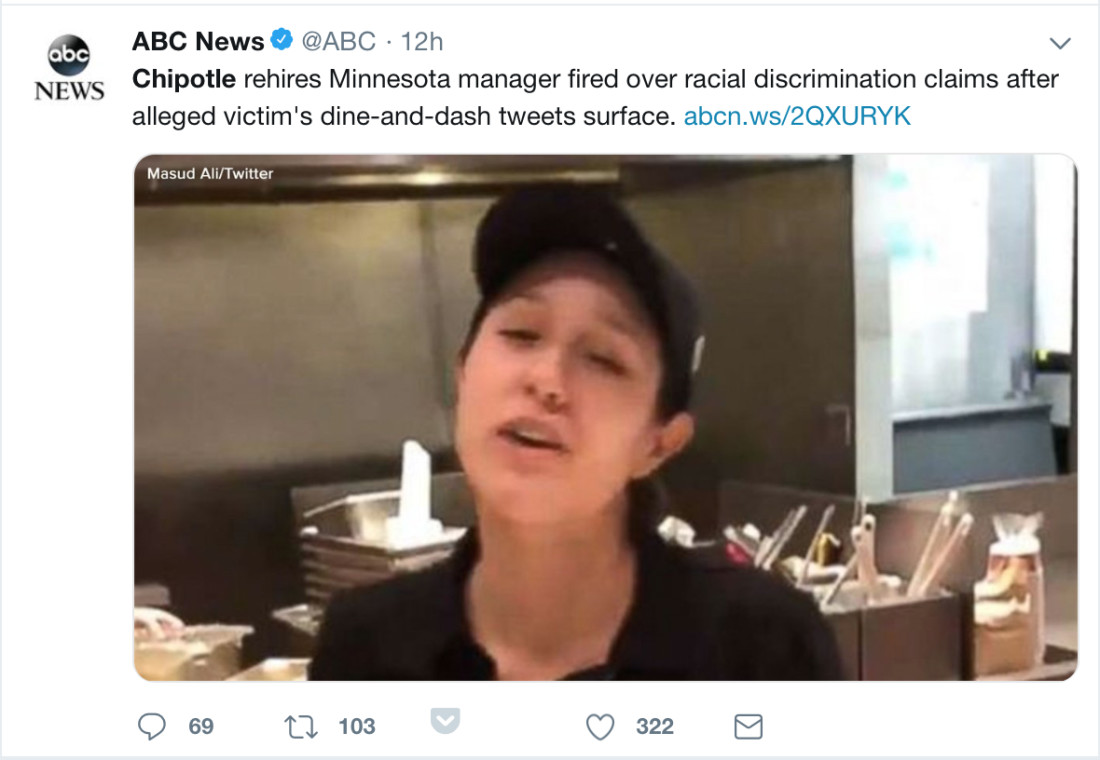 No. 4: Gender pay gap isn't really that bad. A study published this spring indicates that the gender pay gap is almost negligible once you control for position held, career interruptions, and other relevant factors. According to the study, using only "raw" data (controlling only for gender and employment), women currently earn only 77.9 cents for every dollar that men earn. But women earn about 97.8 cents for every dollar that similarly situated men earn. Yes, it's still a gap, but not much of one. A gap that small may actually close.

No. 5: Jobs are back, baby! Fewer reductions in force, more jobs, employees feel free to move around. In fact, many people who had given up on trying to find work are reportedly back in circulation. This has presented some genuine difficulties for employers, like a shortage of qualified labor, applicants who "ghost" employers, and employees who feel freer to quit. Still, this is far preferable to layoffs, RIFs, and millions who want to work but can't find jobs.

No. 6: Normal HR policies are legal again. The National Labor Relations Board has returned to sanity on routine employer policies. Under the new regime, employers have regained their right to impose reasonable limits on employee behavior without running afoul of Section 7 of the National Labor Relations Act. Workplace rules that are ok again include civility rules, bans on unauthorized recording or photography, bans on insubordination or disruptive behavior, rules requiring that only authorized individuals speak on behalf of the employer, and much more.

No. 7: LGBT rights under Title VII to be definitively decided soon? OK, I am going out on a limb with this one. The Supreme Court will decide next week whether to review three federal appeals court decisions involving LGBT rights under Title VII: Zarda v. Airborne Express and Bostock v. Clayton County (both involving sexual orientation discrimination), and EEOC v. R.G. & G.R. Harris Funeral Homes (involving gender identity discrimination). Because I'm in such a good mood after blogging my happy thoughts, I'm going to assume that the Supreme Court will choose to review these three decisions, and then we will know once and for all whether Title VII's ban on "sex" discrimination applies to LGBT rights.

No. 9: And speaking of Constangy . . . I am very thankful for my firm, and for its support of this blog (and a lot of other good stuff, too). I'd like to give special thanks to Neil Wasser and Don Prophete, and to my office head, Kristine Sims; to our fantastic Marketing team led by Tori Whitaker, along with Kian (Wint) Cheng, Stephanie Hendricks, Christine Johnakin, and Rebecca Pugh; and to my brilliant assistant, Tina Tucker. I'd also like to thank all of the attorneys who have contributed posts to this blog since Thanksgiving 2017 (in alphabetical order): Kathy Barrow, Tommy Eden, Billy Hammel, Debbie Hembree, Ellen Kearns, Damon Kitchen, John MacDonald, Bob Ortbals, David Phippen, Paul Ryan, Patricia-Anne Upson, and Jack Wallace. And even though not blog-related, a huge thank-you to Leigh Tyson, the lovely and talented host of ConstangyTV's Close-Up on Workplace Law, and to the attorneys who've committed their time and expertise to being Executive Editors of our legal bulletins -- Will Krasnow (immigration), David Phippen (labor), and Susan Bassford Wilson (retail industry). I'm also thankful for my fellow Constangy blog editors Cara Crotty (Affirmative Action Alert), and Mallory Schneider Ricci and Heidi Wilbur (FOCUS).

No. 10: Last, but definitely not least, I am thankful for my family (have I told you about my grandson?), my friends, my clients, and you, dear readers! Thank you all for your support, and I hope you have a very safe and happy Thanksgiving!