By Robin Shea on 11.13.21
Posted in Coronavirus, Safety, Vaccination

This post may become obsolete in the next five minutes.

A three-judge panel of the U.S. Court of Appeals for the Fifth Circuit issued a new vaccine mandate decision yesterday, declining to lift the stay it had issued on November 6.

As you know, the Occupational Safety and Health Administration issued an Emergency Temporary Standard on November 5 mandating that most employers with more than 100 employees either require virtually all employees to be vaccinated, or require that any unvaccinated employees be subject to weekly testing for COVID-19.

The ETS was scheduled to take effect December 5 with the exception of the weekly testing requirement, which was to take effect in January. But the Fifth Circuit panel issued a two-page emergency stay on November 6.

If you have questioned OSHA's decision to issue the ETS, you will enjoy reading yesterday's decision from the Fifth Circuit panel. The opinion, written by Trump appointee Judge Kurt Engelhardt, called the ETS "fatally flawed on its own terms," "a one-size-fits-all sledgehammer," and "staggeringly overbroad." He also indicated that the Administration issued the ETS to get around the fact that the federal government can't simply mandate that everybody in the United States be vaccinated. In support of the "workaround theory," the judge noted that While House Chief of Staff Ron Klain retweeted MSNBC correspondent Stephanie Ruhle on September 9, the day that President Biden issued his COVID-19 Action Plan, of which the ETS was a part:

Judge Engelhardt also said that the delays in issuing the ETS, as well as the deadlines for employers to comply, undercut OSHA's contention that there was an "emergency" and "grave danger." He said that the ETS was overinclusive because it didn't distinguish between work environments or employees at varying levels of risk, but also underinclusive because employees who work for employers with fewer than 100 employees are completely unprotected by the ETS.

Does this decision mean that employers can quit worrying about the ETS? Unfortunately, no. The ETS has been challenged in a number of lawsuits around the country, and the Government will be using the Multicircuit Petition process. With that process, the Judicial Panel on Multidistrict Litigation will hold a lottery to determine which court with one of these cases will be selected to handle all of the challenges nationwide. The lottery for the ETS challenges will take place this Tuesday, November 16.

The Fifth Circuit could get the draw, but that is not a sure thing. Unions have filed "friendly" lawsuits challenging the ETS in circuits that are expected to be more receptive to the Government's position. That means those circuits will also be included in the lottery.

It is also possible for either party to challenge the assignment after it is made.

(Here is a helpful, and fairly un-nerdy, explanation of the Multicircuit process.)

No matter which court gets this litigation, it is likely to end up at the U.S. Supreme Court.

What should employers be doing?

A burning question with most employers right now is, What do we do? December 5 is only about three weeks away. Should we comply with the ETS even though it has been stayed?

First, if you were going to require vaccination anyway -- in other words, no exceptions except for legitimate medical and religious accommodations -- then the only things you'll need to worry about are putting together a policy and the necessary communications, and deciding on your vax-or-be-fired deadline. If you haven't already done so, you'll also need to establish a reasonable accommodation process, and create appropriate forms. 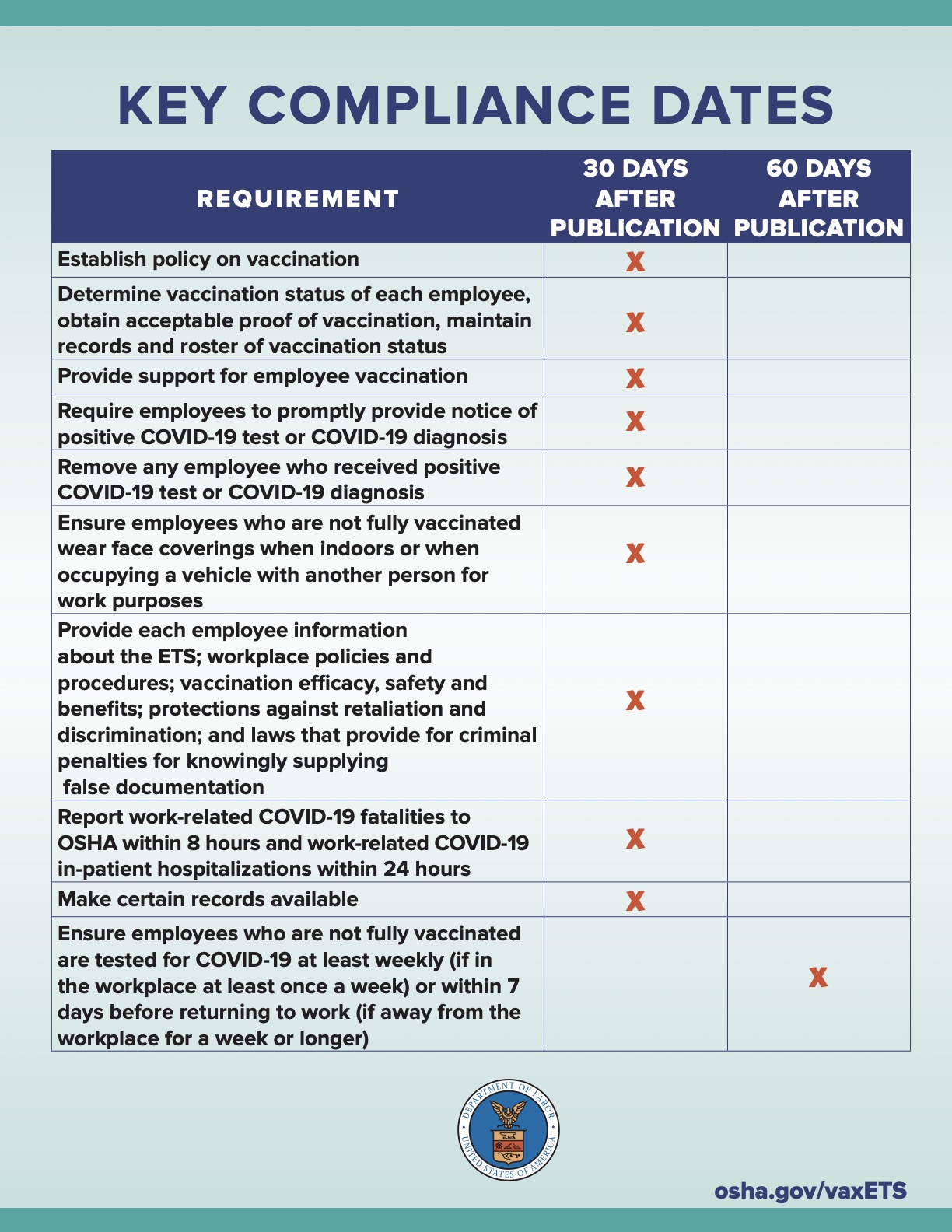 If were going to let employees choose the testing option, the "to-do" list becomes more complicated in light of the stay. Even the ETS says that you don't have to start testing until January, so that's good. I would recommend preparing a policy and other written materials that comply with the ETS (including policies and forms for reasonable accommodation), looking for vendors who can handle the testing for you, deciding whether you are going to require unvaccinated employees to pay for their own weekly COVID tests, and collecting proof of vaccination from the employees who have already been vaccinated. You can also be figuring out how you are going to handle the logistics of getting and keeping proof of weekly COVID tests from your unvaccinated employees.

But I might suggest that, for now, you postpone (1) telling unvaccinated employees that they'll have to be tested for COVID every seven days, which is only going to make them mad, and (2) making any irrevocable contractual commitments with testing or recordkeeping vendors.

Of course, that's just, like, my opinion, man. We will keep you posted.