For a guy who doesn't tweet, Jim Coleman - head of Constangy's Metro Washington D.C. Office and co-chair of our Wage and Hour Practice Group - has suddenly become an awfully big Twitter celeb.

(Or anyway, as big a Twitter celeb as employment lawyers ever become.)

It all started last weekend, when I got a tweet from Suzanne Lucas, the Evil HR Lady:

As I told Suzanne, I really wasn't sure, so on Monday morning, I sent an email to a few of the attorneys in my firm who had significant wage-hour expertise, and Jim immediately replied. It turns out that my assumption was wrong, so I tweeted Suzanne again:

Suzanne was not crazy about this answer (nor was anyone else): 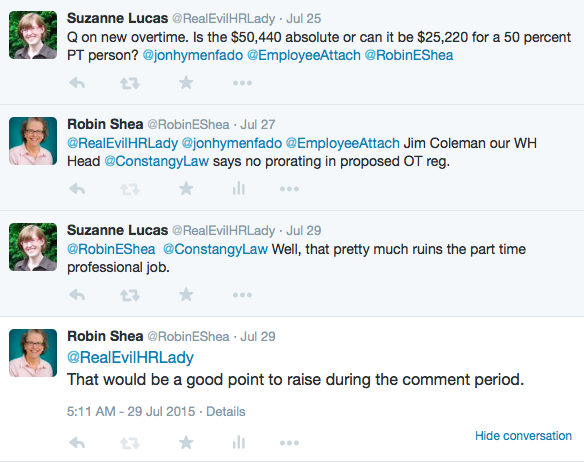 That was the end of the discussion until yesterday afternoon, out of the blue, I received this tweet from Jon Hyman of the Ohio Employer's Law Blog, who knows Jim Coleman:

One minute later, I got a retweet of Jon's tweet from Dan Schwartz of the Connecticut Employment Law Blog:

So, Jim Coleman, congratulations! You are now a Twitter celebrity without having ever sent so much as a single tweet! (Also, thank you very much for helping us all with Suzanne's question.)