By Robin Shea on 10.31.14
Posted in Discrimination, Harassment

When I do harassment training, I ask my audiences whether they think employers should ban the "N" word even when it's used by African-Americans among themselves. In my experience, the African-Americans in the audience have been the most vocal advocates for treating everyone equally in this regard. In other words, they argue, the word should be banned for everybody -- not banned for some and allowed for others.

I agree, for two reasons: (1) it's a revolting word and likely to be offensive to others even if the people using it are African-American, and (2) without fail, somebody who is not African-American will hear it and think it's ok to start saying it. And, at that point, we have an employment disaster.

Mr. Burlington and Mr. Hecht are both white, and both lost their jobs for making racial comments that were offensive to at least some African-American co-workers. Mr. Burlington admits that he used the "N" word (though there are extenuating circumstances, summarized below). Mr. Hecht didn't use the "N" word but engaged in "racial banter."

Please join XpertHR and me at 2 p.m. Eastern on Wednesday, November 12, for the webinar, "How to Make Your Workplace Holiday Party Sparkle - With No Legal Hangovers." In addition to lawsuit-free party tips, we'll review sexual harassment prevention, and the law on alcohol and drug testing.

Mr. Burlington was fired back in 2007 after he used the "N" word in an editorial meeting in which the topic was a news story about a symbolic burial of the "N" word by a youth council of the local NAACP. The consensus among station management seemed to be that Mr. Burlington should have literally said "the 'N' word" instead of figuratively saying the "N" word.

But Mr. Burlington had evidence that a double standard was in place at Fox 29.

Mr. Burlington was never able to get another TV job, and he's now a real estate agent.

Fox 29 was denied summary judgment in December 2010, but the court reopened the decision for the parties to submit briefs about the "cat's paw" theory of liability under the Supreme Court's decision in Staub v. Proctor Hospital. (There was evidence that the flames surrounding Mr. Burlington's comment were fanned by his co-anchor, Joyce Evans, who herself is no stranger to controversy.) Last week, the court said that there was enough evidence of reverse discrimination to send Mr. Burlington's case to a jury, and also enough to allow a jury to decide whether the employer could be liable under a "cat's paw" theory based on Ms. Evans's alleged actions.

Craig Hecht wasn't accused of using the "N" word, but he lost his job over some racial humor. According to the court's decision, Mr. Hecht taught a third-grade class that was 93 percent African-American. A library employee borrowed a brown table from Mr. Hecht's classroom but returned a white one. She asked Mr. Hecht whether he cared that the "returned" table was white instead of brown, and he said "he definitely liked the white table better than the brown and that all of the brown needed to go." He allegedly said to a group of students, "White is better than brown, right?"

Pretty offensive for a white teacher to say to a group of black kids, huh? Except that the teachers at this school kidded about race all the time, according to the evidence presented at trial. As one example, the school had a mural of Dora the Explorer, and an African-American employee joked that her skin was so tan that she should have been called "Laquisha" instead. The African-American staff also allegedly used the "N" word frequently. And, of course, no action was ever taken against them for making racial jokes or comments.

Based on this evidence, the majority on the Michigan appellate court panel found no reason to reverse the jury's verdict for Mr. Hecht on his claim of race discrimination. Because Mr. Hecht was only 35 when he was terminated, and because Michigan has a "disclosure" law that requires teacher applicants to authorize their last employer to provide information about "unprofessional conduct," he was unlikely to ever get another teaching job. So the court also upheld an award that included 22 years of net front pay.

Kids, what can we learn here?

1. The "N" word should be verboten in the workplace. For everybody. Without regard to the speaker's race, sex, national origin, religion, color, age, disability, sexual orientation, or gender identity.

2. Exceptions should be made for the rare situations in which the word may need to be said. For example, when you're a school and your English teacher is doing Huckleberry Finn (as Mark Twain originally wrote it). Or you're producing a Quentin Tarantino movie. Or you're a news organization having an editorial meeting in which the "N" word is an integral part of the story being discussed. Or you're investigating an allegation that someone used racial epithets in the workplace. In the context of an investigation, employees - regardless of race - should not have to fear that they'll be punished for accurately quoting what was said.

3. Zero tolerance for "zero tolerance" policies! Zero tolerance policies are unrealistic, which means that sometimes people who should be punished are not, and sometimes people who shouldn't be punished are, or are punished disproportionately. You don't always have to fire the employee who makes an inappropriate remark. You should take into account the circumstances and context. If an employee makes an inappropriate comment that appears to be a result of stupidity rather than racial hatred, and if he or she isn't a serial offender, consider discipline (and, if appropriate, sensitivity training or mandatory apologies to those offended) as an alternative to termination. For the same reasons, African-Americans who use the "N" word when talking to each other should be cut a little bit of slack (in other words, disciplined but not necessarily fired on their first offense).

4. If an employee makes an ill-advised racial remark and you do have to fire, then consider allowing the employee to resign in lieu of termination. You may even want to consider offering a modest severance package with a release of claims. The release, of course, will protect you from a reverse discrimination lawsuit. 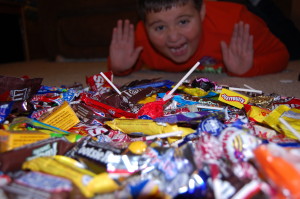 Have a great Halloween tonight, and stay safe from goblins and ghouls!

The September/October edition of Constangy's Executive Labor Summary is out! What do Ebola and union organizing have to do with each other? David Phippen tells you all you need to know, and more.