By Steven Katz on 6.27.19
Posted in Administrative Procedure, Wage-Hour

Not much of a showdown. 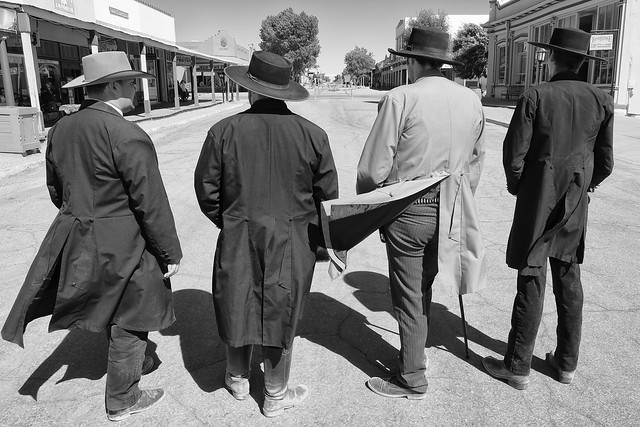 Old Westerns used to end at high noon on Main Street. At one end was the White Hat, at the other end was the Black Hat. Suddenly, guns flashed, shots rang out, and we all held our breath to see who would be standing when the smoke cleared. Usually it was the White Hat.

But what kind of picture would it be if both were standing, while the shoeshine boy was lying in the alley bleeding? That’s exactly what happened yesterday with the U.S. Supreme Court's decision in Kisor v. Wilkie.

(Well, not "exactly." The justices' heads were bare, no guns were involved, and no shoeshine boys were harmed.)

Kisor promised to be one of this term’s blockbusters. The Court granted review on only one issue: Whether to overrule two older decisions saying that courts should generally defer to federal agencies' interpretations of their own regulations -- Auer v. Robbins (1997) and Bowles v. Seminole Rock & Sand Co. (1945).

Court observers expected a shootout to rival the Gunfight at the OK Corral: Liberals versus conservatives over nothing less than the foundation of the regulatory state -- what, if any, deference is owed to a federal agency's interpretations of its own regulations?

Interviews of Justices Ruth Bader Ginsburg and Elena Kagan suggested that there would even be a battle over stare decisis, the principle saying that a court should usually follow its own precedent.

Although yesterday’s decision contained a lot of smoke, there wasn't much actual gunfire. Auer was not overruled. However, it was significantly limited. As Justice Brett Kavanaugh noted in a concurrence, the upshot of the decision is that court deference to agency interpretations is "almost always" merited only if a court concludes that the agency’s view is "the best interpretation of the regulation at issue   . . . [so] the court then will have no need to adopt or defer to an agency’s contrary interpretation."

Which appears to leave the U.S. Department of Labor's Field Operations Handbook in the role of the shoeshine boy.

Although all nine justices agreed that the lower court decision, from the U.S. Court of Appeals for the Federal Circuit, should be vacated and remanded, there was disagreement about how to get to that result. Chief Justice John Roberts -- reprising his role as "the new Justice Anthony Kennedy" -- mostly (but not entirely) joined Justices Stephen Breyer, Ruth Bader Ginsburg, and Sonia Sotomayor to create a narrow majority in an opinion written by Justice Kagan. But the Chief Justice also wrote separately to underscore his belief (shared by Justices Brett Kavanaugh and Samuel Alito in Justice Kavanaugh's separate concurring opinion) that the majority and the other justices were not all that far apart.

Justice Neil Gorsuch, joined by Justice Clarence Thomas, wrote a lengthy concurrence advocating the wholesale abandonment of Auer, but this post will focus on the majority opinion.

The majority set out five requirements that must be met before a court gives deference to an agency’s interpretation of its own regulation:

With respect to the third requirement, whether the interpretation represents the agency’s "authoritative. . . position," the majority cited with approval Exelon Generation Co. v. Local 15, Int’l Brotherhood of Elec. Workers, AFL-CIO. In that case, the U.S. Court of Appeals for the Seventh Circuit "declin[ed] deference when the agency had itself 'disclaimed the use of the regulatory guides as authoritative'."

The guidelines at issue in Exelon were issued by the Nuclear Regulatory Commission. The guidelines specifically stated that "guides are not substitutes for regulations and compliance with them is not required" and that the "NRC staff does not expect any existing licensee to use or commit to using the guidance in this regulatory guide."  The NRC had also said, "Except as specifically authorized by the Commission in writing, no interpretations of the meaning of the regulations in this part by any officer or employee of the Commission other than a written interpretation by the General Counsel will be recognized as binding upon the Commission."

Of more interest to employment attorneys and Human Resources professionals, the Foreword to the U.S. Department of Labor's Field Operations Handbook specifically states that it "is not used as a device for establishing interpretative policy."

In other words, there is no meaningful distinction between the NRC guidelines that were found not worthy of deference in Exelon and the DOL Field Operations Handbook. Thus, in the employment law world, the biggest and clearest take-away from yesterday’s decision is that judicial deference to the DOL Field Operations Handbook is dead -- except when the court is convinced that the Handbook is right anyhow.