"Weakest link" is no way to run your workplace

If news reports are true (and perhaps they are not), then the ex-General Manager of NBC's Today show provides a good example of how not to treat employees. 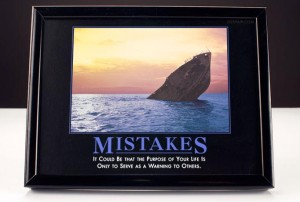 Jamie Horowitz was hired away from ESPN to save the Today show, which has fallen behind its rival Good Morning America in the ratings.

He was fired only 78 days later, and he hadn't even had a chance to take over the show. His "listening tour" with employees, which began in September and was continuing when he was fired, is supposedly what did him in.

Please check out my new article, "Top 10 Hiring and Recruiting Blunders," on ere.net. Even though you don't need it, you may have a "friend" who does.  :-)

But employees also reported that, as part of Mr. Horowitz's "listening tour," he asked them in private meetings which of their co-workers should be "voted off the island" and who was the "weakest link." He also allegedly told people that their co-workers were talking about them behind their backs. Employees said that his questions and comments created "instability and insecurity" in the workplace.

Again, I realize that the news reports may be inaccurate, or that Mr. Horowitz's comments may have been taken out of context, or that Mr. Horowitz may have been a victim of Matt Lauer. But there is, unfortunately, a school of business thought that holds that employee "insecurity"  somehow leads to unheard-of levels of creativity and achievement. Like the "forced rankings" which were so in vogue a few years ago, in which the employee with the lowest performance rating in the group gets fired, even if the peers all got As and the "weak link" got an A minus.

Aren't there enough natural feelings of competitiveness and envy in workplaces already? Do employers really need to go out of their way to make it worse?

Manufactured workplace rivalry can cause morale to plummet and teamwork to become nonexistent. Which in turn results in high turnover, including the loss a lot of people you probably didn't think were "weak links."

From a legal standpoint, a hyper-competitive workplace environment dramatically increases the odds that the employer will become a defendant in a lawsuit, the subject of an EEOC charge or other administrative complaint, or the target of a union organizing campaign. It can also result in increased rates of workers' comp and disability-related claims because employees are too stressed out to be able to face Lord of the Flies each day.

And some business commentators say that it doesn't even help the employer end up with the creme de la creme.

Of course, low-performing employees should be dealt with accordingly. But a "weakest link" approach is not the answer. Like Jamie Horowitz did (whatever the real reason may be), you may find out that the  "weakest link" is you.

I am a corporate event planner and a Jehovah’s Witness.

I appreciate your article because of relaying sensitivity to other religions during corporate events. . . .

However, I would like to clarify one thing. Jehovah’s Witnesses do have parties but if the party is centered on a religious celebration they will not take part in it. Or if they feel the party will not be professionally managed, i.e., uncontrolled alcohol at event, etc.

Thank you again for speaking up for other faiths this is a breath of fresh air.

Jill, thank you for the clarification! I've made a correction to the blog post itself, as well.

*Volkswagen-Chattanooga and the United Auto Workers, from David Phippen. If you are following this most-interesting story, you won't want to miss David's latest. Will European-style labor relations work in the U.S.A.? Is that even a legal option here?

*Last and definitely not least, please do check out the November Employment Law Blog Carnival, Black Friday Edition, hosted by Ari Rosenstein of CPEhr. It's free to read, making it the best bargain you are likely to find this season!

(Speaking of Black Friday, next week's "Friday" post will be up on Wednesday because of the Thanksgiving holiday.)