A few workplace-related things we can be thankful for

From a labor and employment law standpoint, I'm not sure we have a lot to be thankful for this year. But 'tis the season, so here are a paltry few:

Be thankful that your employer doesn't fire you while you're on the air. Ben 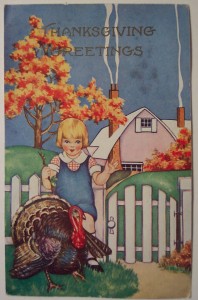 Finfer, co-host of a Chicago sports talk radio show learned that he was losing his job through a tweet that came through while he was on the air last week. Mr. Finfer understatedly called the announcement a "letdown" and then a little less understatedly went on to say, "Why is it so hard to tell your employees that they are losing their jobs? . . . We found out . . . while we were on the freaking air. . . . now we have to sit here and do a show for an hour and forty minutes?"

The station, owned by Tribune Media, had been in existence for only nine months and was reportedly losing money.

Be thankful that you don't work for NBC's Today show. Last week, I posted about the swift termination of Jamie Horowitz, formerly of ESPN, who had been brought in to make the show more competitive against its arch-rival Good Morning America. In the few short days since I posted that, we have learned that Mr. Horowitz wanted to fire Savannah Guthrie, demote Natalie Morales, and remove Al Roker from doing the weather. (All of this was before Mr. Horowitz was fired himself, allegedly due to the intervention of Matt Lauer.) But they all seem so smiley and chatty and friendly! I can't believe it!

Be thankful that you don't work for Walmart if you want Thanksgiving Day off . . . or that you don't work for Costco if you were hoping to pick up a few extra bucks for your holiday shopping needs. The "Black Thanksgiving" debate rages on. By the way, the Occupational Safety and Health Administration has genuinely helpful tips for retail employers to ensure the safety of their employees during all of the Black Friday (or Thursday) insanity.

Be thankful that you don't hate your job. A survey of British workers showed that they were much more likely to eat junk food as "comfort" when they were having a bad day at work. They're also more likely to scarf it down, instead of masticating slowly and deliberately.

In case you haven't seen it by now, please get over to ere.net and read my article, "Top Ten Hiring and Recruiting Blunders by Employers." You'll be thankful that you did!

And here are a few persons and things for whom/which I am genuinely thankful:

*I am thankful for my dear sons, and my new daughter-in-law and her wonderful family, and my mom and sis and brother-in-law and nephew, and all of my extended family and friends. I love you guys! Also, my two pussycats.  :-)

*I am thankful to all of you for reading this blog, and for voting us into the ABA Blawg 100 for 2014! (And a special thanks again to Blawg 100 Hall of Famer, Dan Schwartz.) I'd also like to congratulate some of the other legal bloggers and friends with whom I am humbled to share this honor:  Donna Ballman, Molly DiBianca (Hall of Fame), Bill Goren, Jon Hyman, Eric Meyer, and Jeff Nowak.

*I am thankful for my firm's managing chairman, Neil Wasser, for letting me do this thing and for always being supportive, and for Chief Marketing Officer Tori Whitaker and her excellent team, and to my colleagues who've contributed posts this year: Cara Crotty, Tommy Eden, and David Phippen. Also, a big thank-you to the great folks at Lexblog, especially Katy Maynard, and Kevin and Colin O'Keefe.

*I am thankful for my clients, colleagues, and co-workers. (Too many to name, but you know who you are.)

Have a safe and happy Thanksgiving, y'all, and we'll be back no later than Friday, December 5.