I hope that moment of satisfaction was worth it.

Sheesh. I would hope so.

At a client seminar that my office presented during the very contentious 2016 campaign season, my law partner John Doyle delivered an introductory disclaimer. Although I may not have his words verbatim, I will never forget the message, which was as follows:

The only thing we’re partisan about is employers. That’s it.

It was a great way to dispel the perception that we were being politically partisan while we had to discuss the positive and negative impacts of the candidates’ proposals on employment law issues.

This morning, I got a comment from the plaintiff in an age discrimination lawsuit that I referenced last year, based on an article that had appeared in The Washington Post. Here’s what the plaintiff, Dale Kleber, said to me:

Well, Robin, I was surprised that although you have formal legal training, the article you wrote contains so many factual assumptions that simply are false. I suspect that your firm primarily represents defendant employers and your “analysis” is tainted with the bias of economic self-interest. In the near future, I expect to obtain an objective review of my case from the the Seventh Circuit. Your article, devoid as it is of even the most basic factual or legal analysis is simply an editorial masquerading as a legal newsletter. But perhaps that is what your clients want to hear.

I admit I did not think Mr. Kleber was a victim of age discrimination based on the information in the WaPo article, and I admit that I said so. Reading between the lines on his comment, it appeared to me that he had lost his case (since he was hoping to be vindicated on appeal), but I read the court filings today and it’s more complicated than that. (I’ll have a separate blog post about the merits of Mr. Kleber’s lawsuit, which I think is pretty interesting.)

As far as writing “editorials” on this blog, I plead guilty. This ain’t, after all, The New York Times.

I also admit that I and my firm represent employers, and that we are always on the employers’ side.

But what I’d really like to talk about is what it means to be “on the employers’ side,” or, as John says, “partisan” on behalf of employers.

By Robin Shea on 6.30.17
Posted in Immigration, Lawyers!, Retaliation, Wage-Hour

Can an outside attorney defending an employer in a lawsuit under the Fair Labor Standards Act be liable for retaliation against the plaintiff-employee based on litigation tactics? One court answered that question "yes" last week.

Are these judges crazy? You decide.

In Arias v. Raimondo, a three-judge panel of the U.S. Court of Appeals for the Ninth Circuit reversed dismissal of ...

Continue Reading ›
Is obesity a "per se" disability? One court says no.

By Robin Shea on 4.8.16
Posted in Americans with Disabilities Act, Discrimination

A panel of the U.S. Court of Appeals for the Eighth Circuit ruled this week that obesity is not a "disability" within the meaning of the Americans with Disabilities Act -- even as amended in 2009 -- unless the condition was caused by some underlying physiological disorder. 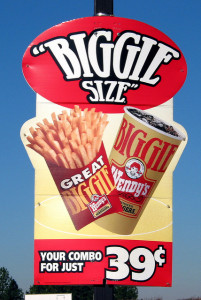 In addition, if the individual develops a medical condition because of the obesity (such as diabetes or ...

By Robin Shea on 3.18.16
Posted in Discrimination, Lawyers!

I have to admit, I was afraid that I might need to go into hiding after I expressed doubts last week about that study claiming that female lawyers don't do well when their bosses are male Republicans. But the reader feedback has been positive, with the possible exception of an ambiguous comment on LinkedIn (more on that below):

Continue Reading ›
Struggling as a lawyer? Then be more like a stripper! Yeah, that's the ticket.

Above The Law is, for the most part, a trash legal-gossip blog with the funniest, nastiest bunch of commenters anywhere. I read it every business day.

But whatever you do, be careful if you read it for the blog posts, especially if you just got out of law school and need help getting your career started.