Here's a summary of what you may have missed over the holiday break. 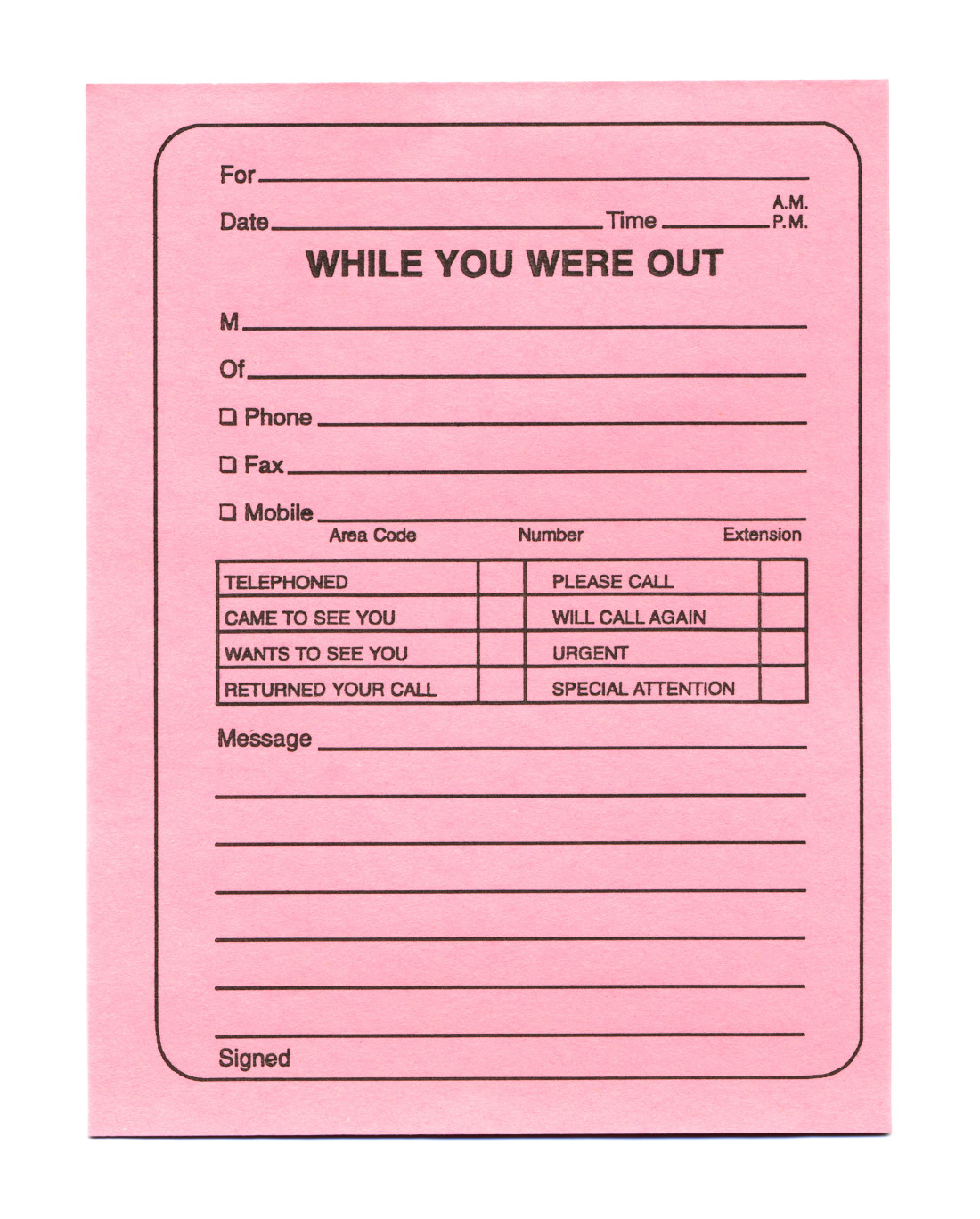 EEOC, court kick "Onionhead" employer while it's down. A federal judge in New York ruled on post-trial motions filed by the Equal Employment Opportunity
Commission after its big win against United Health Programs of America.

A spiritual regimen known as "Onionhead" was forced upon unwilling Catholic, Lutheran, and non-believing employees by the sister of the company's CEO. Some employees who refused to "submit" were fired. More on the bizarre story of "Onionhead" is available here.

Last April, a jury in Brooklyn awarded the employees a total of $5.1 million, which was more than they were authorized to get under applicable law, so the court had to make an appropriate reduction. But it ruled in favor of the EEOC on just about everything the agency asked for, including an injunction directing the employer to sever its business relationship with the CEO's sister.

EEOC is shut down. The Equal Employment Opportunity Commission is on hiatus (for the most part) during the government shutdown.

Enjoy the peace and quiet while you can. According to a December 26 article in Bloomberg BNA's Daily Labor Report, before the shutdown the agency was developing an algorithm that will identify individuals in certain industries who are particularly "susceptible to discrimination." The EEOC expects to use the data to increase its outreach among those employees, and increased awareness could result in more charges of discrimination.

EEOC loses its quorum. Commissioner Chai Feldblum's second term expired in July 2018. She was able to continue serving, but because her nomination for a third term was not confirmed by the Senate, she stepped down as Commissioner yesterday. Another Trump nominee, Daniel Gade, withdrew from consideration right before the holidays, after the Senate had failed to act on his nomination for more than a year. 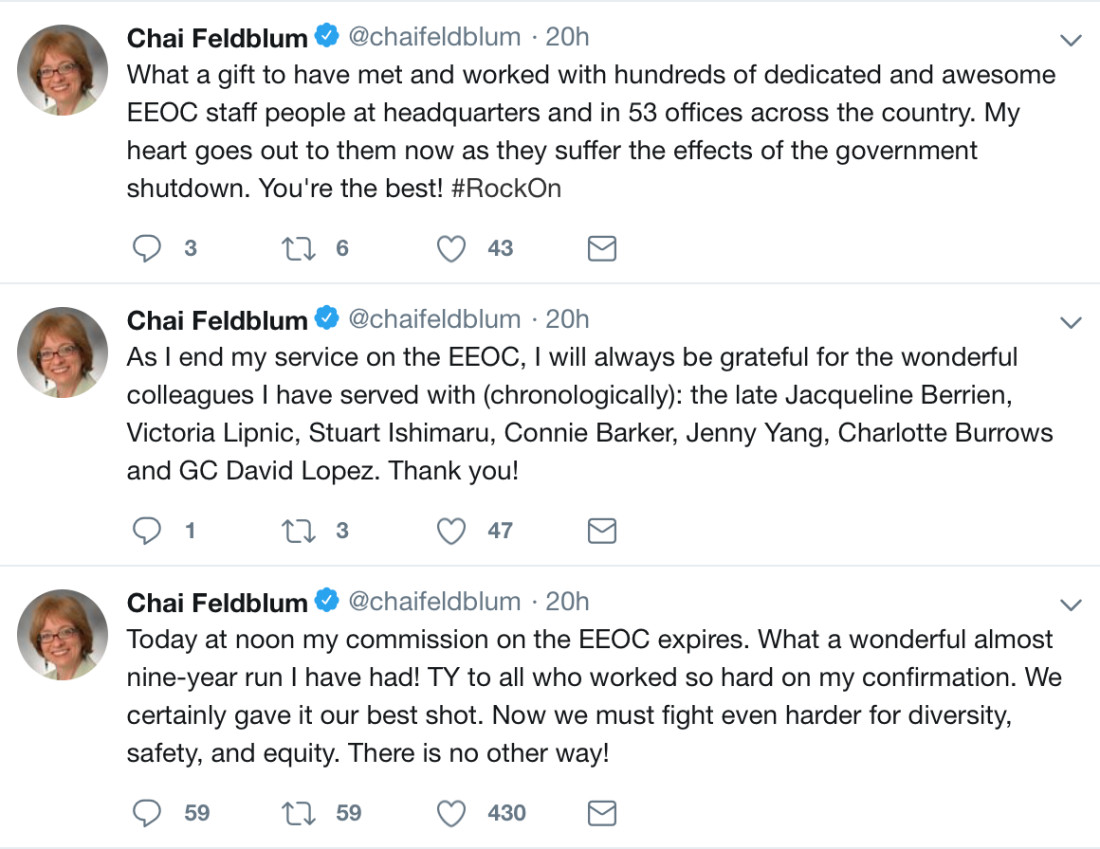 At least two Republican Senators (Marco Rubio of Florida and Mike Lee of Utah) blocked all of the President's EEOC nominees because they did not want Commissioner Feldblum, who believes LGBT rights should usually take precedence over religious liberty, to serve another term.*

So, as of 2019, the EEOC consists of only two Commissioners: Acting Chair Victoria Lipnic (R) and Commissioner Charlotte Burrows (D), with three Commissioner slots and the General Counsel position vacant. Once the shutdown ends, the agency can continue to process charges as normal, but without a quorum it won't be able to make policy or do any other "big picture" things.

*Editorial Rant: Even if one disagrees with Commissioner Feldblum on religious liberty and/or LGBT rights, blocking her confirmation did not make sense. With a Republican president in office, the EEOC should consist of three Republicans and two Democrats. Commissioner Feldblum (D) and Republicans Janet Dhillon and Daniel Gade were to be a bipartisan "package deal." If confirmed, Ms. Feldblum would have been part of the minority on the Commission. The senators standing in her way also kept the Republican nominees from being confirmed.

U.S. Department of Labor (which is still running, despite the shutdown) issues two new wage and hour opinion letters. A bulletin with the details is on the way from Ellen Kearns, co-chair of our Wage and Hour Practice Group, and Matt Steinberg of our Boston Office. One letter says that members of a religious organization who perform work similar to that of monks in monasteries are not "employees" for purposes of the Fair Labor Standards Act. The other deals with calculation of overtime for home health care workers.

Acting director of OFCCP becomes actual director. As Cara Crotty reported earlier this week, Craig Leen, who was named acting director of the Office of Federal Contract Compliance Programs after the resignation of Ondray Harris last summer, is now the official Director of the OFCCP. Cara has much more information for you federal contractors.

D.C. Circuit panel upholds (sorta?) Obama NLRB "joint employer" standard. A comprehensive analysis of the panel's strange and clear-as-mud 2-1 decision in Browning-Ferris Industries v. NLRB is on the way from our labor guru David Phippen. UPDATE: Here is David's excellent analysis, just published. My best guess is that the National Labor Relations Board -- which now has a Republican majority and in September issued proposed regulations that would return to a more employer-friendly standard -- will seek to have Browning-Ferris reheard by all of the judges on the D.C. Circuit or even reviewed by the U.S. Supreme Court.

Arguably, the Board will have no choice. The two judges who upheld the Obama standard seem to be saying that the Board has no authority to establish a joint employer standard that does not comport with the panel majority's interpretation of the common law of agency. In other words, they seem to be implying that the standard in the proposed regulations is invalid.

At least, I think so. Like I said, the opinion is as clear as mud.

The dissenting judge argued that the court should not have decided the case until after final regulations were issued and that the majority has misinterpreted the common law in any event.

The two majority judges (Patricia Millett, author of the majority opinion, and Robert Wilkins) were Obama appointees, and the dissenting judge (A. Raymond Randolph) was appointed by the late President George H.W. Bush.

Supreme Court may decide today whether to take up LGBT/Title VII cases, but don't count on it. The Court has postponed consideration a few times already, but it is scheduled today to decide whether to review the lower court decisions in Bostock v. Clayton County and Zarda v. Altitude Express* (both sexual orientation discrimination cases) and EEOC v. R.G. and G.R. Harris Funeral Homes (a gender identity discrimination case).

*At the Supreme Court, the case name is now Altitude Express v. Zarda.

UPDATE (1/7/19): It does not appear that the Court took any action on these cases in its conferences on Friday, January 4, or today. We will continue to follow.

SECOND UPDATE (1/7/19): According to Bloomberg BNA's Daily Labor Report this afternoon, the Court has relisted the cases for consideration at its conference on January 11, this Friday.

THIRD UPDATE (1/7/19): This afternoon's Daily Labor Report also says that the Court has relisted Yovino v. Rizo for consideration on Friday the 11th. In that case, the U.S. Court of Appeals for the Ninth Circuit held that salary history was not a legitimate "factor other than sex" to use in determining pay under the federal Equal Pay Act. That would be a good one, too.

Minimum wages continue to climb. According to the Daily Labor Report, "at least" 19 states and 20 local governments have increased their minimum wages effective December 31, 2018, or January 1. Here are the states, in alphabetical order, and their new minimum hourly wages:

In addition, a number of cities in California have raised their minimum wages. We'll soon have a blog post with the California details from Jasmine Anderson of our San Francisco Office.