In what is becoming an increasingly common scenario in the healthcare industry and affiliated fields, you terminate an employee for legitimate reasons. Severance may or may not be offered, but if it is, the employee does not immediately accept the package.

Within a month or two of the termination, and still before the employee has agreed to anything, you receive a letter from a plaintiffs’ lawyer. As is typical, the lawyer argues that the employee is entitled to more money. The lawyer goes on to claim that the employee was treated discriminatorily because of his or her race, national origin, sex, age, disability, or religion. In other words, the usual.

But one paragraph catches your eye:

Moreover, my client became aware during the course of her employment that her supervisor, Dr. Smith, was overcharging for certain procedures performed for Medicaid patients and prescribing procedures for Medicaid patients that were not medically necessary. These actions put Dr. Smith and your facility in violation of the federal False Claims Act. When my client expressed objection that Dr. Smith was defrauding the United States Government, Dr. Smith began the process of disciplinary action that resulted in my client’s discharge. I have advised my client that she has a valid claim on behalf of the United States Government against Dr. Smith and your facility, as well as a valid whistleblower retaliation claim.

My client is willing to accept a severance package of [a lot more than you offered] and a neutral job reference in exchange for a release of claims. You have until 5 p.m. Friday, December 2, to respond to this offer. If we have not heard from you by that time, we will institute legal action against you and Dr. Smith. You are under a continuing obligation to preserve all documents related to my client, to Dr. Smith, and to all Medicaid procedures provided by Dr. Smith from January 1, 2010, through the present, as set forth more specifically in the Document Preservation Notice which is enclosed with this letter.

Is the False Claims Act really a big deal?

Yes, and it’s become a huge deal in the healthcare and affiliated industries. The FCA provides, among other things, that it is unlawful for anyone to “knowingly present[], or cause[] to be presented, a false or fraudulent claim for payment or approval” to the U.S. government, or to knowingly provide false information in support of such a claim.

Enacted during the Civil War era to prevent defense contractor ripoffs, the FCA is a real concern for employers who do business with the federal government.

The U.S. Department of Justice frequently uses a small but statistically significant sampling of alleged overbillings or inappropriate billings and extrapolates them to all similar billings for the entire organization, which saves the DOJ the trouble of proving individual claims and can result in massive potential liability for national or other large organizations. The DOJ also aggressively pursues healthcare organizations that evaluate or compensate physicians in part based on the number and “quality” of patient referrals they make to the organizations.

Moreover, the Affordable Care Act requires that healthcare providers notify the government within 60 days if they discover an overpayment by the government. In 2015, a federal court in New York held that this 60-day period begins to run when the provider determines that a possible overpayment occurred; in other words, the provider may not wait until it confirms the overpayment. And the U.S. Supreme Court unanimously decided in June of this year that a healthcare employer can be liable under the FCA based on an “implied certification” that is materially false. If the healthcare provider submits an application for reimbursement by the federal government indicating that services were provided but fails to disclose that the services were not rendered in compliance with all applicable laws and regulations (and if the non-disclosed information was material), then the provider can be liable for an FCA violation. This is true even if the withheld information was not specifically required in the first place.

Finally, the DOJ issued an internal memorandum last year indicating that it will focus its investigations on individual wrongdoers (actual or alleged) in addition to organizations. Although the memorandum was not issued specifically in the context of the False Claims Act, presumably it would apply to FCA cases.

Nor does the FCA procedure provide comfort to healthcare employers.

Even after a complaint is initially filed, it can be years before the healthcare provider even knows that it’s been sued. The individual – known as a “relator” – files a complaint and supporting documentation with the court “under seal,” which means that no one other than the government, the relator, and the court, can see it. The complaint has to remain under seal for at least 60 days, but the government can substantially extend that time. Some whistleblower plaintiffs’ websites estimate that the “seal” period with extensions typically ranges from one to five years.

“In State Farm Fire and Casualty Co. v. U.S. ex rel. Rigsby, the U.S. Supreme Court will decide whether a violation of the seal by the relators’ attorney should result in automatic dismissal of the case. Oral argument was heard this week.

Needless to say, 30 percent – or even 15 percent – of an “extrapolated” violation, possibly based on “implied certifications,” can be substantial.

How not to be held hostage

Based on the above, it’s not hard to understand why plaintiffs’ attorneys use threats of FCA lawsuits against healthcare employers to negotiate better separation packages and settlements for their clients. The potential consequences of an FCA claim are so significant (and, of course, the FCA has an anti-retaliation provision) that, in the view of the plaintiffs’ bar, a healthcare employer will do almost anything to avoid such a claim. But here are some ways you can keep from becoming a hostage:

Consult closely with qualified healthcare counsel. Make sure that your healthcare counsel has reviewed and approved your compliance with applicable Medicare and Medicaid, and other legal requirements, for receiving reimbursements from the federal government as well as any state governments. (Many states have their own versions of the False Claims Act.) If you determine that there may be a problem, notify your healthcare counsel immediately and follow his or her advice about how to rectify the situation. The best defense to a threat of FCA litigation is, obviously, not to be in violation of the FCA.

Make sure that you can prove that any employee’s termination was for legitimate, non-retaliatory reasons. In other words, follow the standard “termination” advice: (1) have clear guidelines about the expectations for the position, as well as behavior and attendance standards; (2) administer discipline in accordance with your written policies, which should provide for progressive discipline for performance and non-serious behavior issues, and termination on first offense for dishonesty, violence, or other serious misconduct; (3) make sure you have adequate documentation to justify your decision; and (4) treat the employee at issue the same way you would treat any other similarly-situated employee – in other words, make sure that the termination is consistent with your past practice. A buttoned-up termination will help you show that the termination was not “whistleblower retaliation.”

If an employee who is in trouble claims that he or she engaged in FCA-protected activity or that your company is in violation of the FCA, stop everything and fully investigate before taking any further action. You’ll never go wrong by taking your time. On the other hand, a rush to judgment could give that soon-to-be-ex-employee – not to mention the DOJ – much more legal leverage against you.

Include the FCA in your standard release language. Check the releases in your severance agreements. If they don’t include the False Claims Act, have your employment counsel add it. Although this will not protect you from claims by employees who refused to sign severance agreements, it may shield you from claims by the overwhelming majority who do sign. (The agreement should specify that employees are free to speak truthfully to government investigators or testify truthfully in court proceedings.)

Respond appropriately to threats of FCA claims by terminated employees. If a terminated employee (or her lawyer) threatens to bring an FCA claim against you, stop everything and fully investigate. Ask for the evidence of FCA violations. They may or may not share that with you, but if they do, you’ll be able to assess whether this is an idle threat or a genuine one. If they refuse to share any information with you, or even any specific allegations, that may be a sign that the threatened claim has no merit. Unfortunately, it may also be a sign that they’re playing close to the vest in preparation for a False Claims Act lawsuit. Either way, it will be in your interests to investigate to the best of your ability and take as much corrective action as possible. 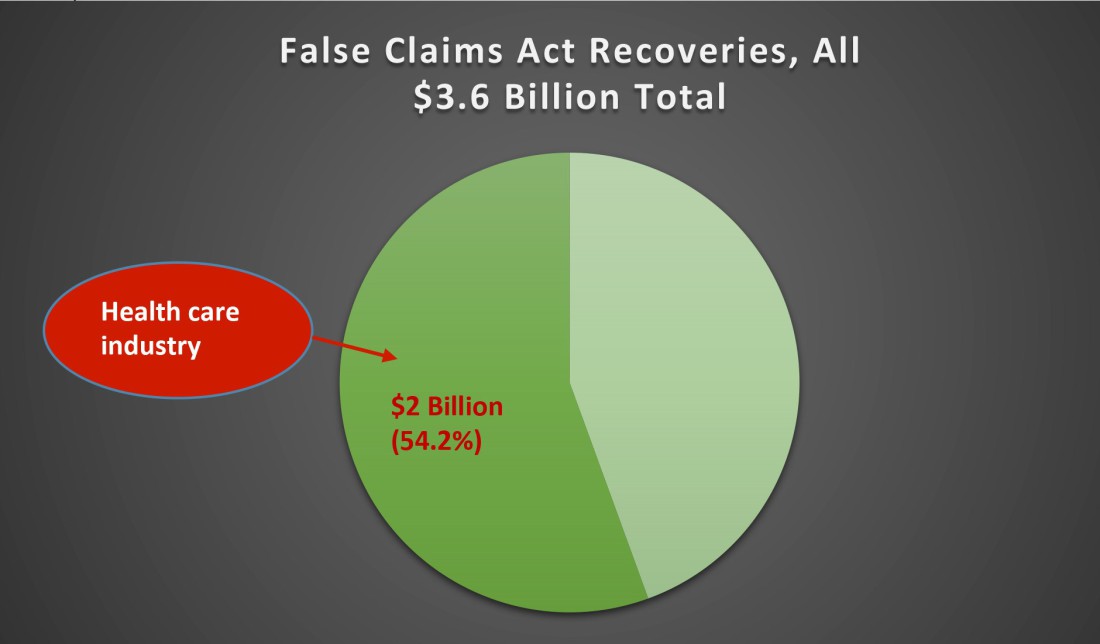 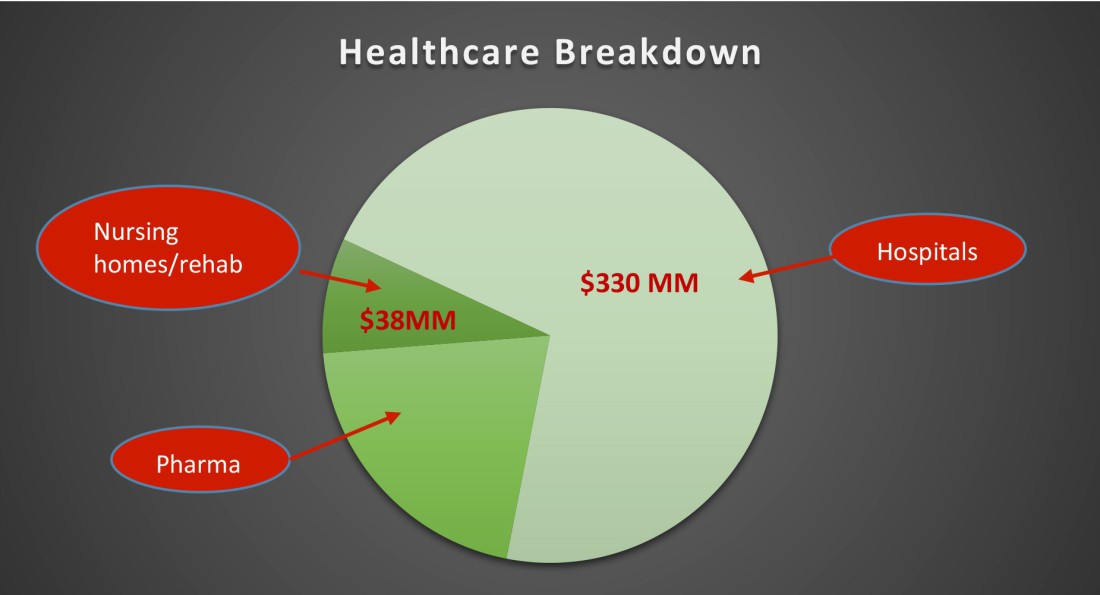 SOURCE: From U.S. Department of Justice for FY 2015 (most recent data available). NOTE that healthcare industry breakdown does not add up to $2 billion. All figures are rounded.

EEEK! It’s almost here! December 1 is D-Day for the white-collar exemptions to the overtime provisions of the Fair Labor Standards Act. In your final hours before the rule takes effect, you can read this FLSA overtime “before and after,” and an interview with Jim Coleman and Ellen Kearns, co-chairs of our Wage and Hour Practice Group, about the lawsuits and legislation that seek to block the rule from taking effect (and why Jim and Ellen think employers need to be ready anyway). If you need a refresher on what the rule will do, you can read Ellen’s bulletin from May.

EEO-1 reports will require compensation information. The Equal Employment Opportunity Commission is going forward with plans to require comp information on EEO-1 reports for all employers with 100 or more employees (not just federal contractors!) starting in 2017-18. Here are the specifics, from Don Prophete and Robin Shea.

NLRB continues its assault on workplace civility and decency. For the National Labor Relations Board’s latest and strangest positions on what used to be considered standard employment policies, you can’t do better than this summary by David Phippen. You may feel worse after you read it, but that can’t be helped.

Is “ban the box” resulting in fewer job opportunities for certain minority applicants? Cara Crotty, chair of our Affirmative Action Practice Group, discusses a study indicating that “ban the box” laws may be doing the opposite of what they were intended to do.

Shoddy harassment investigation comes back to bite employer. Maybe a supervisor has been accused of harassment, and you want to investigate without riling up all of the employees. Is it a good idea to pull your punches? After all, he’s innocent until proven guilty, right? Right, but that doesn’t mean you don’t do a thorough investigation anyway.

Must-reads for federal contractors. Cara Crotty has the scoop on the preliminary injunction blocking the final rule on Fair Pay and Safe Workplaces, which would have required many federal contractors and subcontractors to report their “labor law violations” to the federal government -- so that the government could have decided whether to debar them. And here is Cara’s analysis of the Final Rule on the paid sick leave requirement for certain federal contractors, which, unfortunately, has not been enjoined.