The evolution of “sex”: What health care employers need to know about LGBT employees and the law

WARNING: This article may be obsolete by the time it arrives in your inbox.

The law regarding LGBT (lesbian, gay, bisexual or transgender) employees is evolving so quickly, it’s hard for even the most conscientious of health care employers to keep up. Nonetheless, we will attempt to review the latest developments and provide some tips for employers in the health care industry.

On the other hand, discrimination based on gender identity (including transgender status) has been found by most courts to violate Title VII as a form of unlawful “sex stereotyping.”

Title VII, enacted in 1964 and signed into law by President Lyndon B. Johnson, prohibits employment discrimination (defined broadly) based on “sex,” in addition to race, religion, national origin, and color. In 1978, Congress enacted the Pregnancy Discrimination Act, signed into law by President Jimmy Carter, which added pregnancy and pregnancy-related conditions to the category of “sex.”

It is likely, if not absolutely certain, that no congressperson in 1964, or perhaps even 1978, dreamed that “sex” meant anything other than the “traditional” biological sexes of male and female. Accordingly, in 1979, the U.S. Court of Appeals for the Ninth Circuit found in DeSantis v. Pacific Telephone that discrimination on the basis of sexual orientation did not violate Title VII. Specifically, the court said, Title VII was enacted with the purpose of putting women on an equal footing with men in the workplace, and therefore “sex” meant “sex,” not “sexual preference.”

The evolution of the meaning of “sex” began with two U.S. Supreme Court decisions: Price Waterhouse v. Hopkins in 1989 and Oncale v. Sundowner Offshore Services, Inc.in 1998.  In Price Waterhouse, a female accountant who was passed over for partnership brought a sex discrimination suit against the firm. Ms. Hopkins was allegedly told that she could improve her chances at becoming partner if she would take a charm course and “walk more femininely, talk more femininely, dress more femininely, wear make-up, have her hair styled, and wear jewelry.” Significantly, other women at the firm made partner; Ms. Hopkins alleged it was the fact that she was not a traditionally “feminine” female that caused her to be passed over. The Supreme Court found that discrimination because of “sex-plus,” or sex stereotyping, was impermissible under Title VII. Nine years later, in Oncale, the Supreme Court had the opportunity to do the same for a “delicate” man. The plaintiff in Oncale, who was not gay, was an oil rig worker who sued his employer after quitting because of co-worker harassment that included threats of rape and sexually suggestive humiliation. In this case, the Supreme Court found that same-sex sexual harassment violated Title VII.

Since Hopkins and Oncale, many – if not most – federal courts have found that the reasoning in those decisions applies to employees who are discriminated against because of their gender identity.  For example, in 2004 the U.S. Court of Appeals for the Sixth Circuit in Smith v. City of Salem, Ohio, held that an employee’s claims that he was discriminated against based upon gender non-conforming behavior and appearance (not being “masculine enough”) were actionable under Title VII.

More recently, the EEOC has been suing employers for discrimination based on employees’ transgender status. One of the first two lawsuits, filed against an eye clinic in Lakeland, Florida, has settled for $175,000. In the other lawsuit, filed against a funeral home chain in the Detroit area, a federal judge recently granted summary judgment in favor of the funeral home and against the EEOC.

Despite these sex stereotyping decisions, federal courts have continued to refuse to apply Title VII to discrimination based on sexual orientation. But the EEOC believes Title VII does apply to such claims, and it is charging ahead with sexual orientation lawsuits against employers. This is in line with the EEOC’s most recent Strategic Enforcement Plan, which says that "coverage of lesbian, gay, bisexual and transgender individuals under Title VII's sex discrimination provisions" is a top Commission enforcement priority.

As we have previously reported, health care employers who are federal contractors are required to prohibit discrimination and harassment based on LGBT status.

Federal law may be a moot point if you operate in a state that already prohibits discrimination based on LGBT status.

So how should an employer address questions related to things like restroom use, employees transitioning genders while employed, benefits and insurance coverage?  Again, keep in mind that there is currently no clear federal law specifically defining LGBT as a protected status. However, employers (even in states that do not provide LGBT protections) may want to take proactive steps to guard against future discrimination or harassment claims.

One important step is to review your non-discrimination and harassment policies to assess whether sexual orientation is included. If not, consider whether you want to add it.  As always, a good policy is written in clear, easily understood language that provides for a complaint and investigation procedure if an employee feels that he or she has been discriminated against or harassed by a co-worker, supervisor, customer or anyone else.  It should also set forth the consequences of such actions, and prohibit retaliation for any good-faith complaints or assistance in an investigation.

If your policy prohibits discrimination or harassment against LGBT individuals, be sure that your employees understand that. This can be covered through written communications and in your regular harassment training.

You also may want to consider creating a policy regarding the protocol for an employee transitioning between genders. If your management and workforce is aware of these policies and has received advance training on them, when the situation arises there’s less potential for confusion and missteps. The EEOC has taken the position that failure to provide health care coverage for gender reassignment surgery violates Title VII, so make sure that your employees are covered.

Employers may require adherence to reasonable standards for workplace appearance, grooming, and dress. However, gender-specific differences may be a problem (in New York City, for example, it is unlawful to have gender-specific dress and appearance codes).

In general, employers should treat employees consistent with their expressed gender identity within the limits of the law. That may require you to update benefits paperwork or personnel records, preferences in your employee tracking software, or signature blocks.

Keep in mind that something you may take for granted or view as unimportant can have potentially dire legal consequences. For example, the EEOC has taken the position that denying an employee the use of a restroom consistent with the employee’s gender identity, or using the incorrect pronoun to describe that employee, is evidence of discrimination under Title VII. 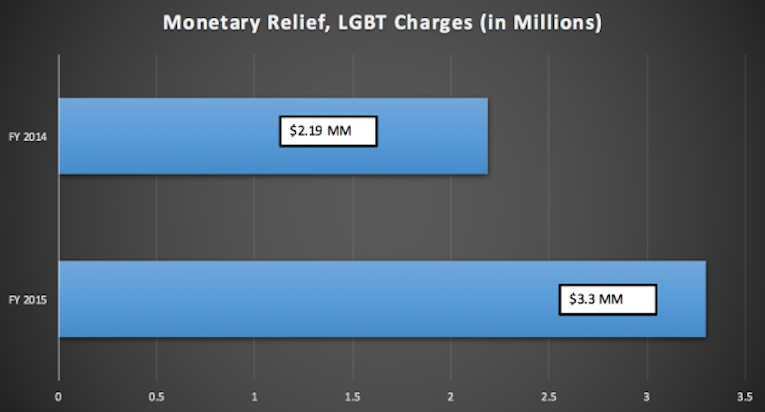 *Sexual orientation is not a protected category under Title VII, appeals court says. As noted in our feature article in this edition, the U.S. Court of Appeals for the Seventh Circuit has decided in Hively v. Ivy Tech Community College that Title VII does not prohibit discrimination based on sexual orientation. Many older cases have said the same thing, but this may be the first to engage the issue after the Supreme Court’s decision in Obergefell v. Hodges, approving same-sex marriage on constitutional grounds.

*Neither is gender identity in itself, federal district court says. A federal judge in Detroit recently granted summary judgment to a funeral home chain in the lawsuit of EEOC v. R.G. and G.R. Harris Funeral Homes. In a case that is sure to go up on appeal, the judge found that (1) gender identity is not per se a protected category under Title VII, (2) the EEOC did not have enough evidence of sex stereotyping to get to a jury, and (3) the defendant was entitled to accommodation from the EEOC under the Religious Freedom Restoration Act.

*The bathroom wars continue. As most of our readers know, the federal government has issued Guidelines requiring employers to let employees – and educational institutions receiving Title IX funds to let students – use restroom and locker room facilities consistent with their gender identity. In the view of the federal government, it is unlawful for an employer to require a transgender employee to use (a) the facilities of his or her biological sex, or (b) a single-use facility when multi-stall sex-segregated facilities are available. The federal government and the State of North Carolina are suing each other over North Carolina’s legislation requiring that restroom and locker room use be segregated by biological sex. And a transgender student at a high school in Virginia successfully appealed in a Title IX lawsuit against his school district because he was going to be required to use the locker room and restroom facilities consistent with his biological sex (female). The U.S. Supreme Court has stayed the appellate decision while the school district petitions for review. In June, Jill Stricklin of our Winston-Salem Office covered the Fourth Circuit decision, and whether it might apply to private-sector employers, here.

Meanwhile, a federal judge in Texas has issued a nationwide preliminary injunction prohibiting the federal government from enforcing its Guidelines “or asserting the Guidelines carry weight in any litigation initiated following the date of this Order.” Plaintiffs in the Texas lawsuit included the states of Texas, Alabama, Wisconsin, West Virginia, Tennessee, Arizona, Maine, Oklahoma, Louisiana, Utah, Georgia, Mississippi, and Kentucky.

While all this has been going on at the federal level, Massachusetts has enacted a law requiring that individuals be allowed to use the facilities based on their gender identity in public accommodations. The Massachusetts law will not be affected by the injunction issued in the Texas lawsuit, because the injunction applies only to the federal government.

*Good news/bad news at OSHA. First, the agency issued a Reasonable Reporting Procedure Rule, which would prohibit employers from having injury-reporting rules that might tend to discourage employees from “accurately reporting” – such as disciplinary action for employees who fail to report workplace injuries or illnesses immediately. The rule was to take effect August 10, but after some employer groups sued to block portions of the rule, OSHA postponed the effective date to November 1. That was good news – the bad news was that, effective August 1, penalties for violations of OSHA Standards and the General Duty Clause increased by 78 percent. But the good news is that the U.S. Department of Labor settled a lawsuit against U.S. Steel for having too harsh an injury-reporting rule, and the document filed with the court included a copy of an injury-and-illness reporting policy that U.S. Steel promised to adopt as part of the settlement and that will presumably pass muster with OSHA. Is your head spinning yet?

*Speaking of OSHA (and other laws), how should employers respond to the Zika virus, now that it’s come to the United States? Mike Malfitano of our Tampa Office has all you need to know.

*EEOC plans to request pay information on employers’ EEO-1 reports. The only good news is that the EEOC changed its proposed reporting deadline to coincide with income tax time so that employers can use W-2 information. Apart from that, this proposal looks like it will be a big pain for employers.

Think that new FLSA overtime rule is bad for you? It may be bad for your employees, too. The new rule on white-collar overtime exemptions will take effect on December 1. Employers can restructure affected employees’ salaries so that the changes are “cost-neutral” or nearly so. Meanwhile, the new non-exempt employees are entering a world of trial and sorrow – having to account for every minute of the work day, having to stop work when the “scheduled” day is over, no matter how much they may need (and want) to keep going, and perhaps most importantly, having to deal with their perceived loss of status as exempt employees. Read it and weep.