Eugene Scalia to be Trump's nominee for Labor

This just in, from The New York Times.

I just got a notification that President Trump will nominate Eugene Scalia, son of the late Supreme Court Justice Antonin Scalia, to be Secretary of Labor. Here's the text of the article, by Maggie Haberman, Noam Scheiber, and Michael Crowley:

President Trump is expected to name Eugene Scalia as his next secretary of labor, according to two people with direct knowledge of the decision, tapping the son of the former Supreme Court justice Antonin Scalia for a position with vast responsibility over the American work force.

The appointment would most likely to be contested by Democrats and labor unions because Mr. Scalia has a long record of representing employers like Walmart and questioning regulations intended to help workers. He was a former top lawyer for the Labor Department in the George W. Bush administration and is currently a partner in the Washington office of Gibson, Dunn & Crutcher.

Mr. Scalia was nominated by Mr. Bush in 2001 to serve as solicitor of the department, but was never confirmed by the Senate, which was controlled by Democrats at the time. Much of the fear about Mr. Scalia’s nomination at the time was based on his opposition to a Clinton administration regulation that would have protected workers from repetitive stress injuries, which became known as the ergonomics rule. Mr. Scalia had weighed in frequently against the rule, deriding the rationale for it as “junk science.”

Mr. Bush eventually used a recess appointment to install Mr. Scalia in the position, effectively bypassing the Senate. He left the department in 2003.

Here is a link to the NYT article, with a picture of Mr. Scalia. He looks a lot like his dad. 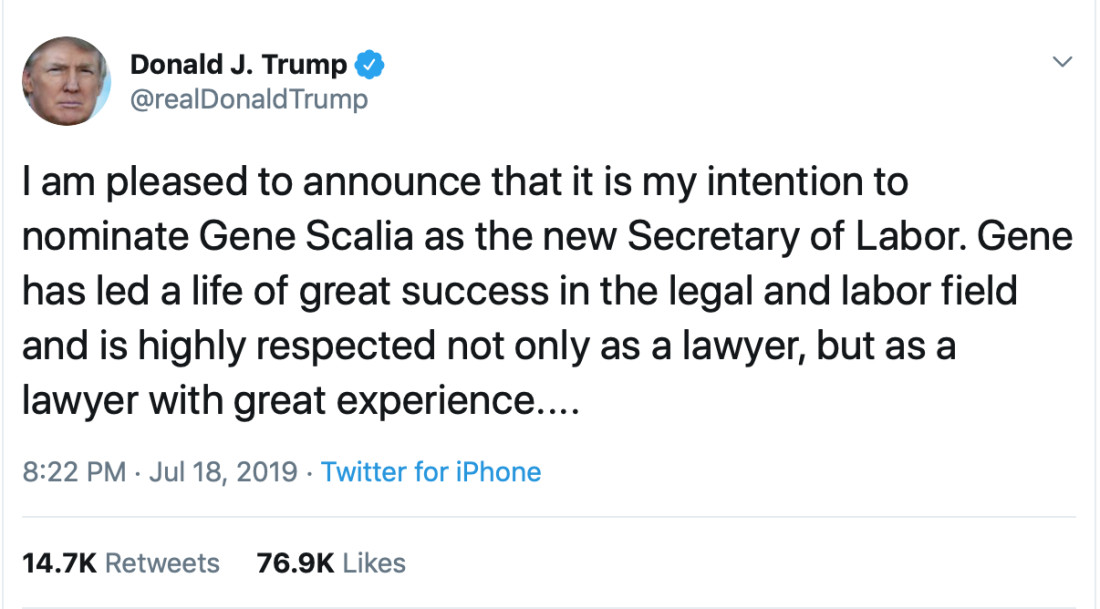