The EEOC has a new General Counsel.

Yesterday, Sharon Fast Gustafson was sworn in as General Counsel of the Equal Employment Opportunity Commission, filling a position that has been vacant since December 2016. 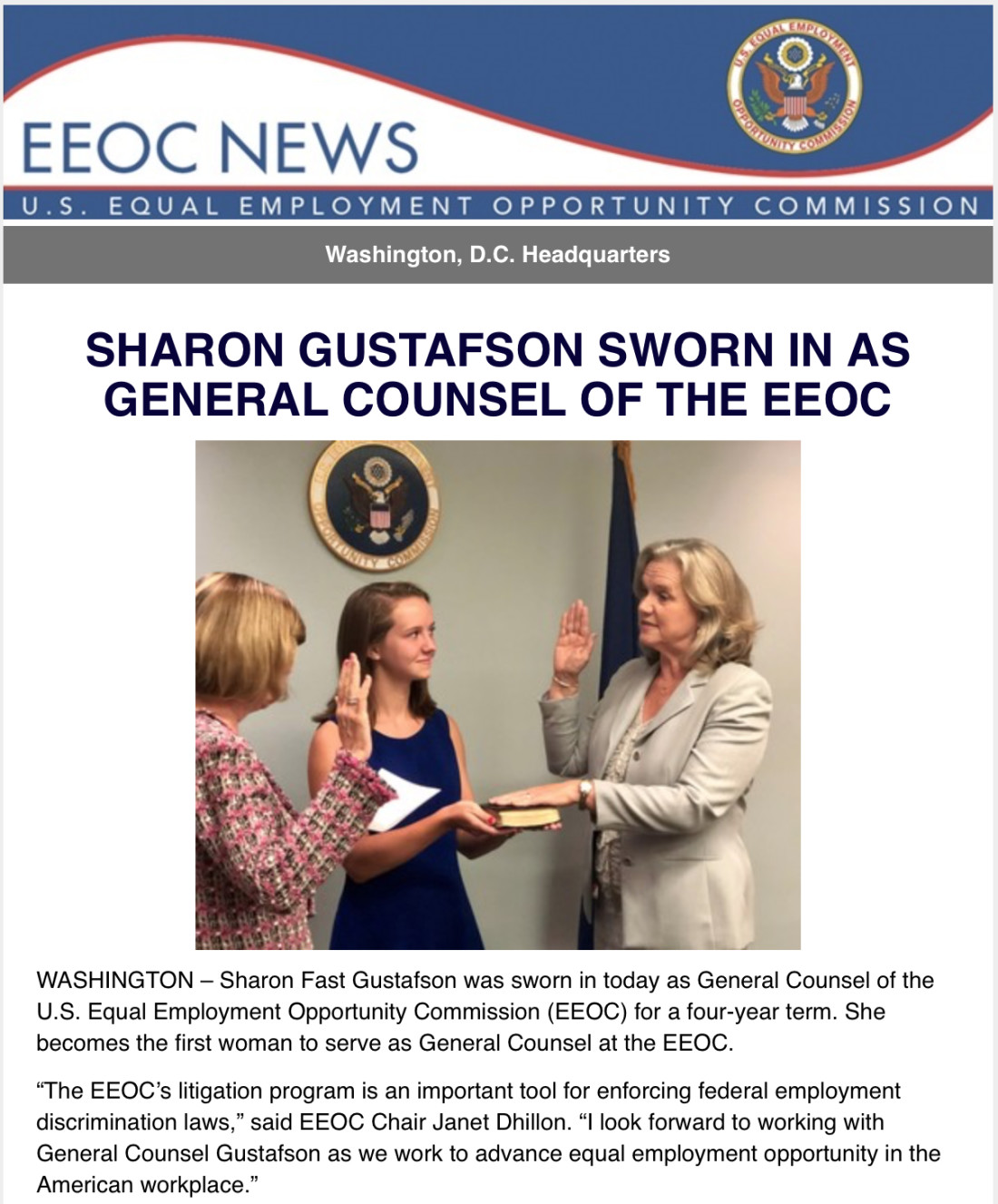 Here is the full text of the EEOC's news release:

"The EEOC's litigation program is an important tool for enforcing federal employment discrimination laws," said EEOC Chair Janet Dhillon. "I look forward to working with General Counsel Gustafson as we work to advance equal employment opportunity in the American workplace."

Gustafson said, "My own experience so far in employment discrimination matters has not been to sit in a high seat, pulling the levers of power. Rather, I have been a solo lawyer most often repre­sent­ing the employee of modest means or the small business employer. My seat has been in a media­tion room, trying to invoke the agency's remedies to help someone get his job back, to get compen­sa­tion for a wrongful termination, or to preserve the reputation of an employer wrongly accused. I think of my work as having been retail, street-level civil rights litigation. I look forward to using my decades of experience in employment law to conduct the litigation of the EEOC. My goal is to work with the EEOC's career staff to prevent illegal discrimination in the workplace and to remedy it where it has occurred."

Gustafson was counsel for Peggy Young in the pregnancy discrimination case Young v. United Parcel Service, 2011 WL 665321 (D.Md.), aff'd, 707 F.3d 437 (4th Cir. 2013, rev'd and remanded, 575 U.S. ____, 135 S. Ct 1338 (2015). Young, a delivery driver for United Parcel Service, requested an accommodation for her pregnancy-related lifting restriction advised by her doctors. UPS refused, and Young lost her employee medical coverage. Young sued in federal court, charging the employer with violating the Pregnancy Discrimination Act.  The case went to the U.S. Supreme Court.  The Court held that employers should provide the same reasonable accommodations to pregnant employees as are offered to other employees with similar restrictions.

I appreciate the reference to the "mediation room," and especially her acknowledgement of "an employer wrongly accused." Welcome, Ms. Gustafson.