At a client seminar that my office presented during the very contentious 2016 campaign season, my law partner John Doyle delivered an introductory disclaimer. Although I may not have his words verbatim, I will never forget the message, which was as follows:

The only thing we’re partisan about is employers. That’s it.

It was a great way to dispel the perception that we were being politically partisan while we had to discuss the positive and negative impacts of the candidates’ proposals on employment law issues.

This morning, I got a comment from the plaintiff in an age discrimination lawsuit that I referenced last year, based on an article that had appeared in The Washington Post. Here’s what the plaintiff, Dale Kleber, said to me:

Well, Robin, I was surprised that although you have formal legal training, the article you wrote contains so many factual assumptions that simply are false. I suspect that your firm primarily represents defendant employers and your “analysis” is tainted with the bias of economic self-interest. In the near future, I expect to obtain an objective review of my case from the the Seventh Circuit. Your article, devoid as it is of even the most basic factual or legal analysis is simply an editorial masquerading as a legal newsletter. But perhaps that is what your clients want to hear.

I admit I did not think Mr. Kleber was a victim of age discrimination based on the information in the WaPo article, and I admit that I said so. Reading between the lines on his comment, it appeared to me that he had lost his case (since he was hoping to be vindicated on appeal), but I read the court filings today and it’s more complicated than that. (I’ll have a separate blog post about the merits of Mr. Kleber’s lawsuit, which I think is pretty interesting.)

As far as writing “editorials” on this blog, I plead guilty. This ain’t, after all, The New York Times.

I also admit that I and my firm represent employers, and that we are always on the employers’ side.

But what I’d really like to talk about is what it means to be “on the employers’ side,” or, as John says, “partisan” on behalf of employers.

Those of you who have kids know what I’m talking about. Were you always on your kids’ side? Of course – they’re your kids. Do you always think your kid is right? I hope not. I sure didn’t, and neither did my parents, lucky for me. (Come to think of it, now that my kids are adults, they don’t think I’m always right, either.) One of the most destructive things a parent can do to a child is uncritically applaud everything that the child does. 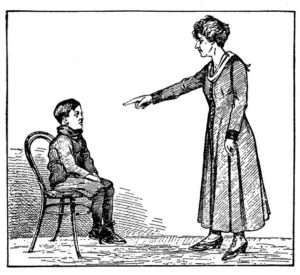 Maybe a better analogy — since kids are immature — would be your best adult friend. If you see your best friend doing something foolish or self-destructive, you say something, right? That’s the difference between being a friend and being superficially “friendly.”

These are not perfect analogies, but I consider being “on the employer’s side” as being a true friend to the employer. In other words, being the employer’s counselor and guide. (And I know from working with him that John sees it the same way.) In the employment context that means

*Helping the employer to comply with the law

*Helping the employer to treat its employees well

*Helping the employer to treat its employees fairly

How does any of this hurt employees? It doesn’t. HR readers, am I right, or am I right?

So, yes, Mr. Kleber, I am proud to say that I am “partisan” for employers. And that partisanship benefits employees, too.