This year is ending with quite a few changes in various federal workplace posters. To ensure that employers, especially federal contractors, have kept up with the required changes, here is a summary:

The U.S. Department of Labor made changes to some of the posters included in what is commonly called the Federal 6-in-1 Poster. The changes relate to the posting requirements under the Fair Labor Standards Act, the Employee Polygraph Protection Act, and the Family and Medical Leave Act.

The FLSA posting was revised to include the rights of nursing mothers, the wage credit for tipped employees, and the classification of independent contractors.  The polygraph poster contains revised information regarding penalties. The FMLA poster more fully integrates the military family leave provisions than the previous version.

The 2013 version of the FMLA poster is still acceptable to post, but the remainder of the posters should have been updated by August 1, 2016. If your Federal 6-in-1 Poster has not been updated since these changes, you should replace the version you are using with the new version.

Executive Order 13706 requires certain employers that contract with the Federal Government to provide up to 7 days of paid sick leave annually, which includes caring for family, and absences resulting from domestic violence, sexual assault and stalking. 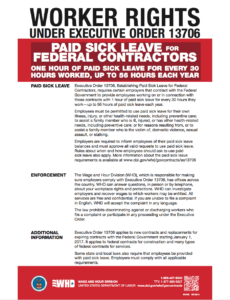 E.O. 13706 provides sick leave to any person engaged in performing work on or in connection with (1) procurement contracts for construction covered by the Davis-Bacon Act; (2) service contracts covered by the McNamara-O’Hara Service Contract Act; (3) concessions contracts, including any excluded from the SCA; and (4) contracts in connection with federal property or lands and related to offering services for Federal employees, their dependents, or the general public. Any subcontract of a covered contract that falls into one of these four categories is subject to the paid sick leave requirements as well.

Covered employees accrue 1 hour of paid sick leave for every 30 hours worked on or in connection with a covered contract. E.O. 13706 applies to new federal contracts and replacements for expiring contracts with the federal government that result from solicitations issued on or after January 1, 2017. Once covered, contractors must post the DOL notice in their workplaces or electronically where employees typically receive notices about terms and conditions of employment.

Beginning January 1, 2017, certain federal contractors must pay covered workers at least $10.20 per hour.  Additionally, covered tipped employees performing work on or in connection with covered contracts must be paid a cash wage of at least $6.80 per hour.  The DOL does not yet have the 2017 poster available on its website, but it will presumably be similar to the current version: 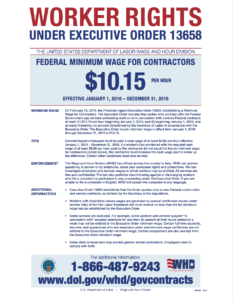 The OFCCP’s Pay Transparency regulations went into effect in January 2016, so many contractors are now required to post a non-discrimination notice electronically or in their workplaces in conspicuous locations. This mandatory language must also be included in employee handbooks and manuals. 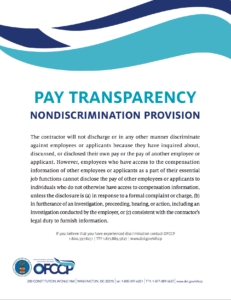 Employers should ensure that they have all workplace posters applicable to them posted where accessible by employees. The DOL’s website provides a link to various required posters by subject matter.