Thinking out loud about medical marijuana and reasonable accommodation

(When I think out loud, beware.)

Ellen Kearns' discussion of last week's decision in Barbuto v. Advantage Sales and Marketing, in which the Massachusetts Supreme Judicial Court ruled that employers may have to accommodate employees who use medical marijuana, got me thinking about whether we need to revisit some of our assumptions about marijuana in the workplace.

A very quick recap of the Barbuto decision: The Court said that an employee with a disability who used medical marijuana in accordance with Massachusetts state law (and off-site and during non-working hours) might be entitled under the state's disability-rights law to reasonable accommodation of her marijuana use. One exception, among possibly others, would be for the employer to make an exception to its "no drugs" policy.

In jurisdictions where the Americans with Disabilities Act governs, employers should be able to refuse to hire applicants or to terminate employees who test positive for marijuana, even if the use is medicinal. That is because the ADA does not protect "current users of illegal drugs," and marijuana is still an illegal drug under federal law.

In other words, what I'm thinking about is workplaces in states that allow the use of medical marijuana and also have disability protections at the state level, and where there are employees in non-safety-sensitive jobs who are lawfully using marijuana to treat conditions that qualify as "disabilities" under the applicable state law. 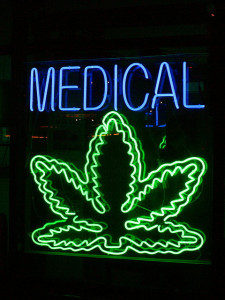 In that limited category of workplaces and employees, shouldn't employers be thinking about treating the use of medical marijuana the same way they'd treat the use of other prescription medications?

Suppose an employee with back problems takes prescription pain medications. As an employer, you would not disqualify him from working in customer service or in some other non-safety-sensitive job unless there was an indication that his condition or medication made him unable to do the job. Right?

I'm having trouble seeing the difference between these "normal" situations and an employee who has been lawfully prescribed marijuana for his or her medical condition that qualifies as a "disability."

I checked the Mayo Clinic website on risks associated with use of medical marijuana, and here is what they say:

Further study is needed to answer this question, but possible short- and long-term risks of using marijuana to treat medical conditions include:

But they also say this:

Some medical marijuana is formulated to provide symptom relief without the intoxicating, mood-altering effects associated with recreational use of marijuana.

Compare that with what the Mayo Clinic says about opioids, like hydrocodone and oxycodone for treatment of arthritis pain:

An opioid isn't the first choice for treating chronic conditions such as arthritis. Aside from cancer pain, opioids more commonly are reserved for short-term pain relief, such as after injuries or surgeries. When other means of relieving arthritis pain haven't helped, opioids may be prescribed. But safety and effectiveness are issues.
Opioids may not be helpful. Even when they are, people often develop a tolerance to opioid pain medications over time, so the effect of the medication may diminish after taking the same dosage for several months.

Opioids have risks that may be particularly serious for older people, including:

It seems to me that, for the category of employee we are talking about, the employer may want to consider treating the medical marijuana user the same way it would treat any other user of a lawful prescription medication. In other words,

Like I said, I'm just thinking. Am I off base? What do you think?