By Robin Shea on 2.7.20
Posted in Discrimination

Almost all good news for employers.

Janet Dhillon, Chair of the U.S. Equal Employment Opportunity Commission, issued her priorities for the year 2020, and employers ought to like most of them:

Excellent customer service. This includes prompt handling of charges, increased use of technology, increased emphasis on data collection, and support for "front-line employees."

Compliance assistance. I love it when the agencies focus on helping employers comply with the law. This priority includes education and outreach to businesses. It also includes updating guidance, and better yet -- withdrawing guidance that "raise[s] the potential for confusion among our stakeholders, or exceed[s] the Commission's statutory authority." Ms. Dhillon also intends to prioritize monitoring and enforcement of "compliance elements" in conciliation and other agreements.

On that last, an EEOC conciliation agreement (a settlement agreement entered into after the EEOC has found that the employer violated the law) or Consent Decree (in this context, a court-approved settlement agreement entered into to resolve a lawsuit filed by the EEOC) usually requires the employer to post notices, amend its policies, and conduct periodic training on the EEO issue that resulted in the charge, and to report back to the EEOC once it has satisfied these requirements. In some cases, the employer may also be required to periodically report any internal complaints it received related to the issue and how the complaints were handled.

But once the case is resolved and the settlement money is paid, some employers forget their follow-up obligations. It sounds like the EEOC intends to be more aggressive in ensuring compliance.

PRO TIP: Because attorneys are ethically required to have some sort of docketing/reminder system, one easy solution is for the employer to ask its attorney to "docket" the applicable deadlines under the agreement and send reminders to the employer when deadlines are approaching.

Enhancing efforts with respect to "vulnerable" workers. Ms. Dhillon does not identify who the EEOC considers to be "vulnerable."

"Strategic allegation of Commission resources." This includes more of an emphasis on mediation (which takes place before the investigation has begun), a more meaningful conciliation process (which takes place after the EEOC has investigated and found "cause"), treating litigation as a last resort and not using it to "change the law," and generally not overstepping the agency's legal bounds with federal employees.

Practice what they preach. Ms. Dhillon's last priority is to treat employees of the EEOC the way the EEOC would expect you to treat your employees.

I was going to post about it last week, but I was sick.

I'm almost back to normal now. The good news is that almost all EEOC charges declined in FY 2019, although some of the monetary settlements in certain categories were up. 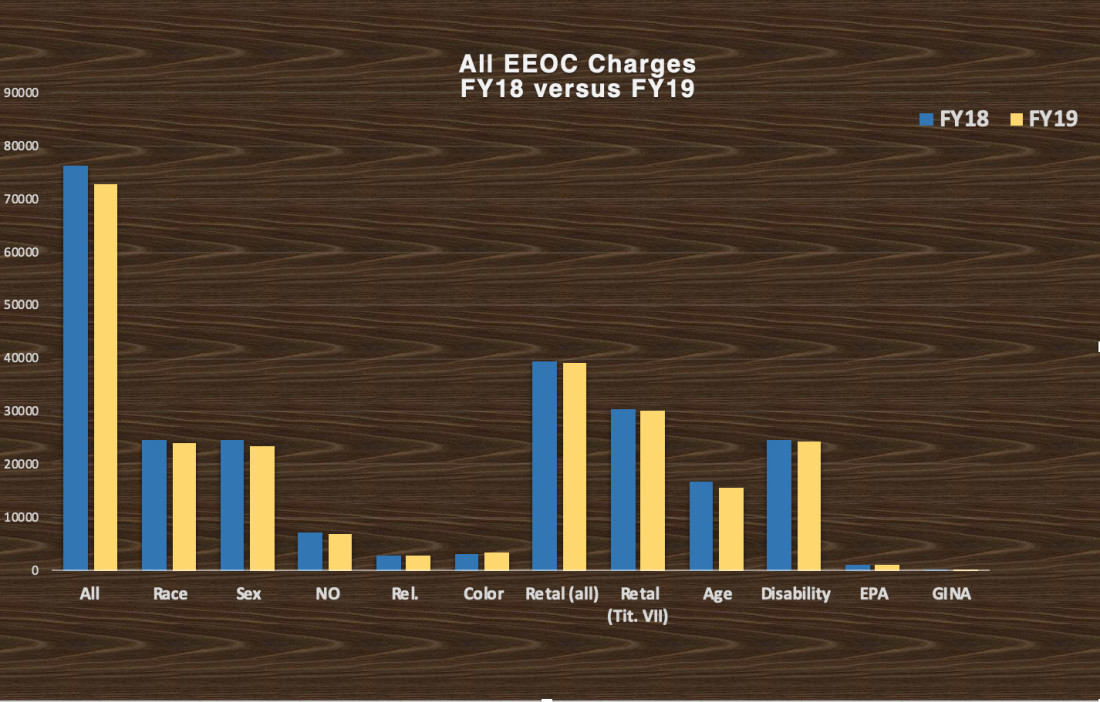 The only categories of charge that increased in FY19 were color and Equal Pay Act charges. But, as you can see, those make up a very small percentage of all charges filed.

I got the feeling last year that #MeToo had peaked. And the EEOC's statistics on sexual harassment show that the number of charges did decline a bit in FY19: 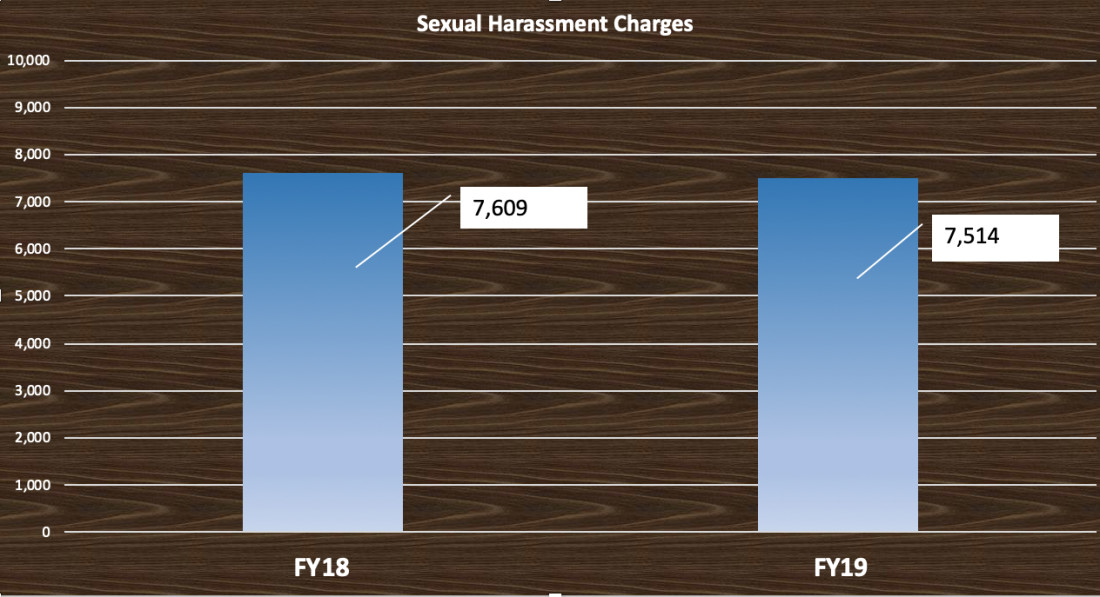 But the amount that the EEOC obtained in settlements increased pretty significantly in FY19, indicating that many employers do not want to fight these cases in court: 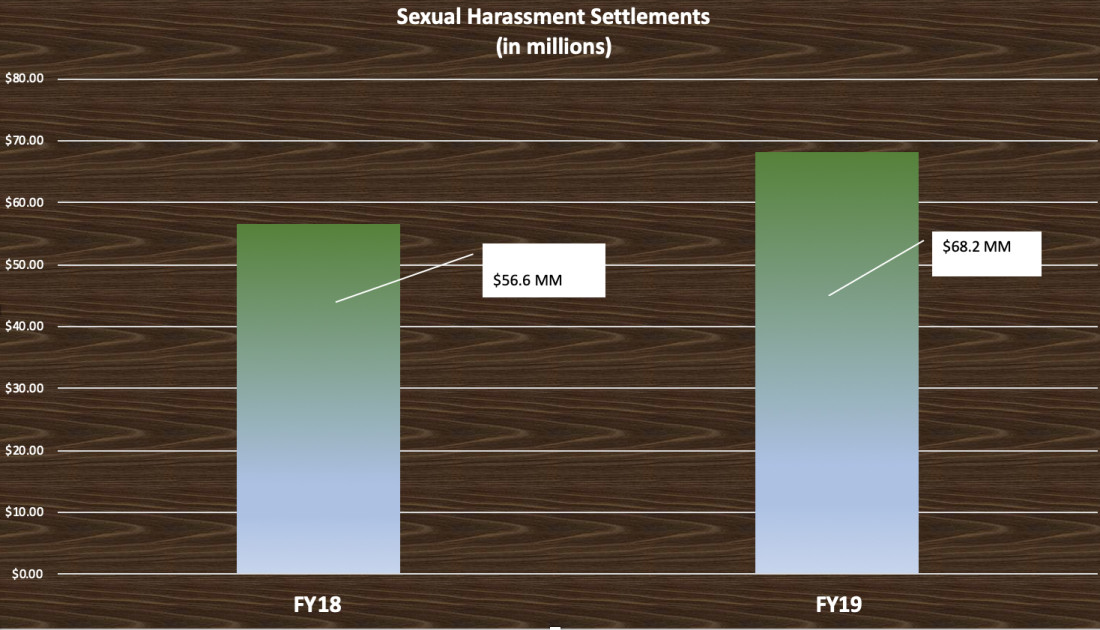 As in the past few years, the percentage of sexual harassment charges filed by men has increased: 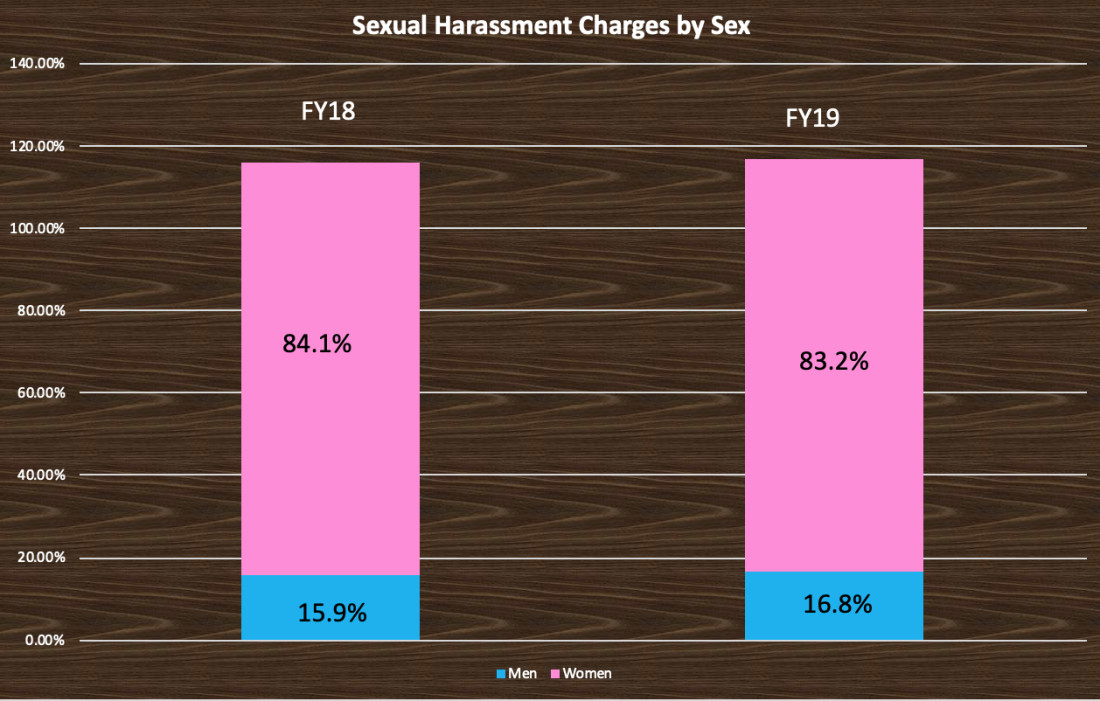 Another hot area in EEOC charges is those based on sexual orientation or gender identity discrimination. In this category, both the number of charges and the amount of settlements increased: 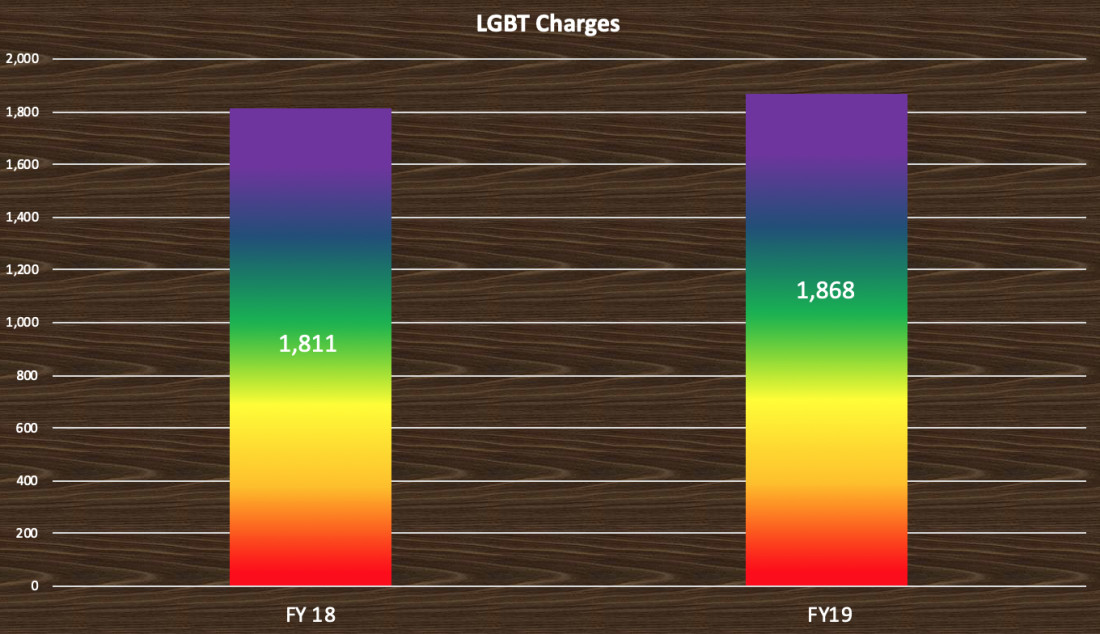 Here are the monetary settlements of LGBT charges: 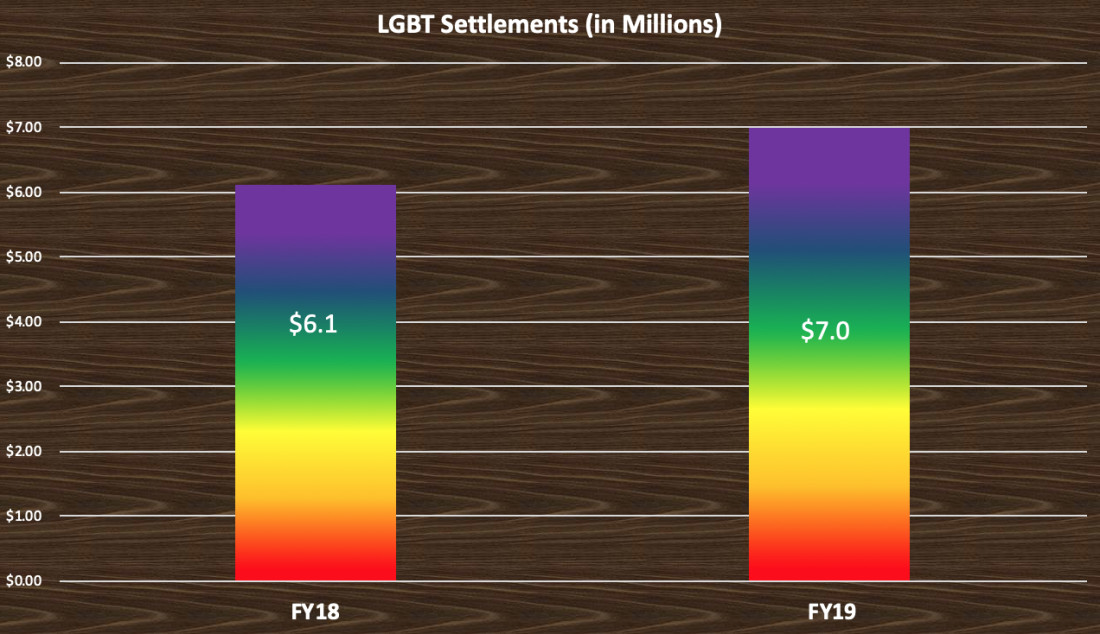 Depending on what the U.S. Supreme Court decides in the LGBT-Title VII cases it is deciding, this category could increase dramatically later in FY20 or disappear altogether. (If the Court decides that Title VII does not apply to LGBT discrimination, then the EEOC would have no jurisdiction over those charges.)

Pregnancy discrimination and failure to accommodate pregnancy-related restrictions has been a hot issue. Although the number of charges decreased in FY19, the monetary value of the settlements increased: 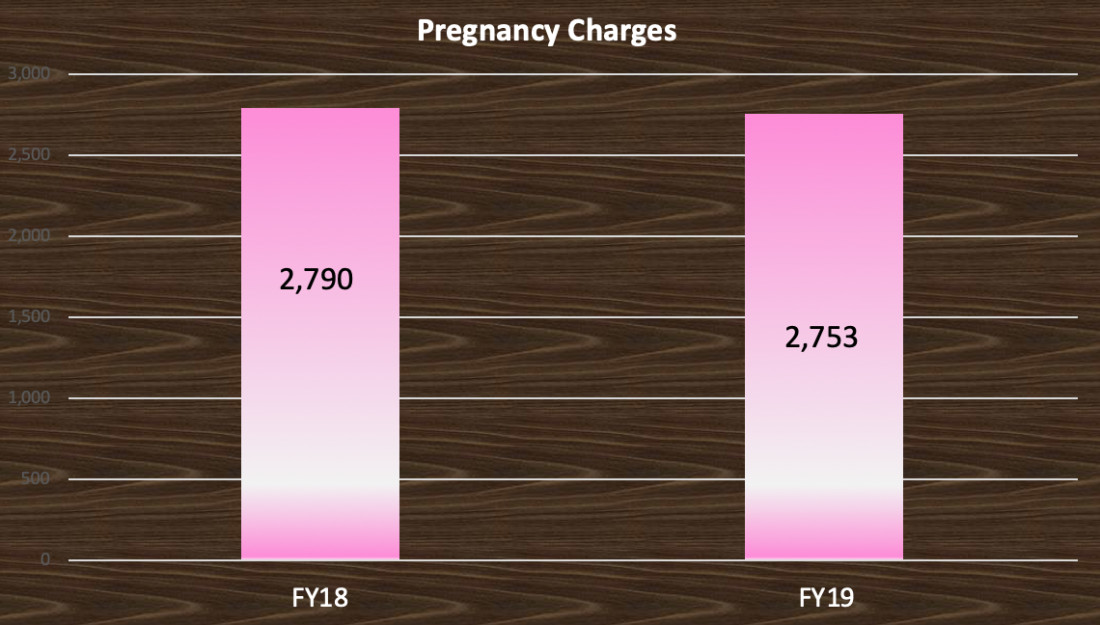 Here are the monetary settlements: 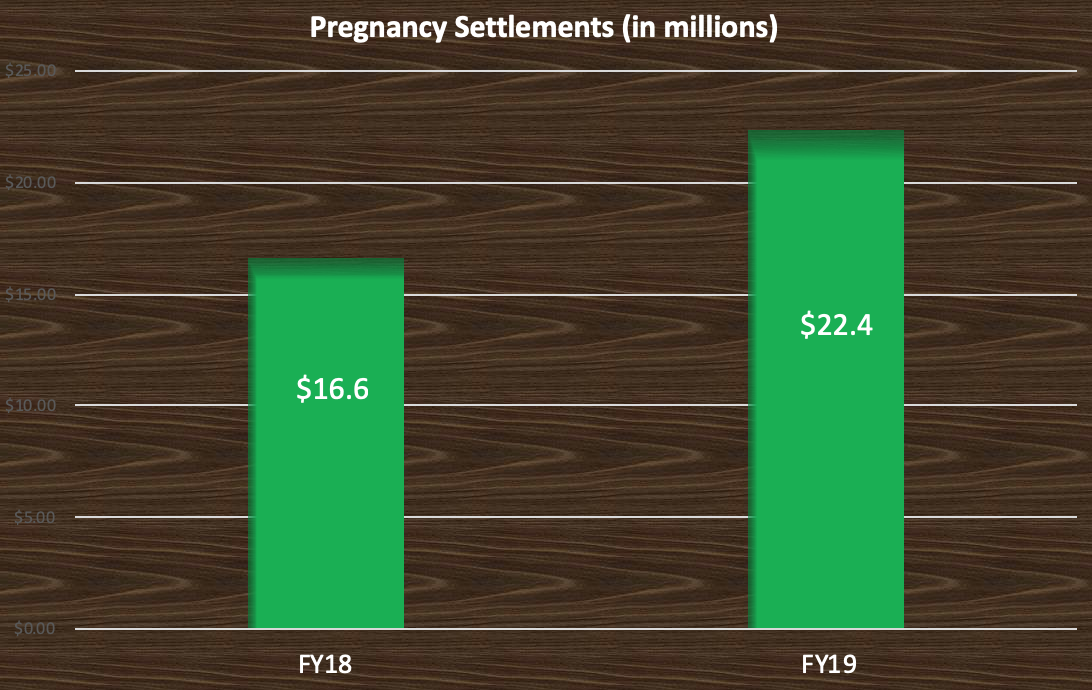 I hope this chart makes you feel as good as it does me! This is from Fiscal Year 2015 through FY19. What a decline! 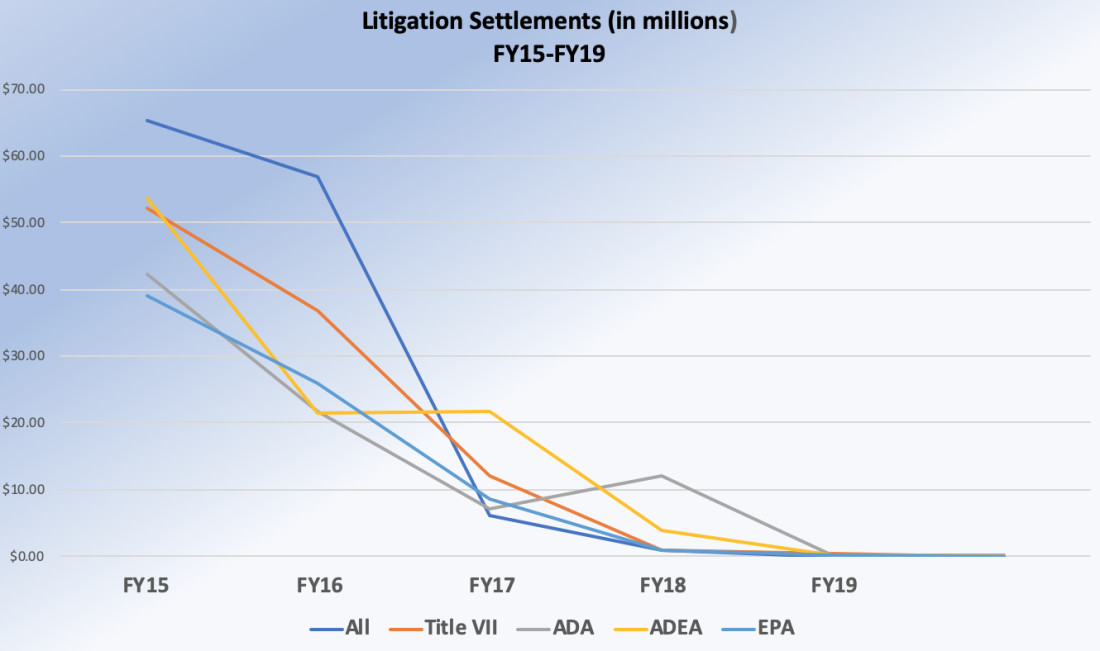 Which 10 states do you think had the most EEOC charges in FY19? The answer may surprise you!

(I didn't want to make it too easy for you to cheat.)

Where the heck is California? Oh, here it is:

This ranking looks very odd until you remember that California and New York, as well as some of the other "surprisingly low" states, have their own state fair employment practices laws. Thus, there are presumably plenty of charges being filed in those states -- but many are being filed under state law rather than federal law, which the EEOC enforces. In a state like North Carolina, an employee who feels discriminated against has no alternative to the EEOC.

In case you're not in one of the "Top Ten" states but would like to know how you came out, here is a color-coded U.S. map that shows where the action was, and wasn't, in 2019: 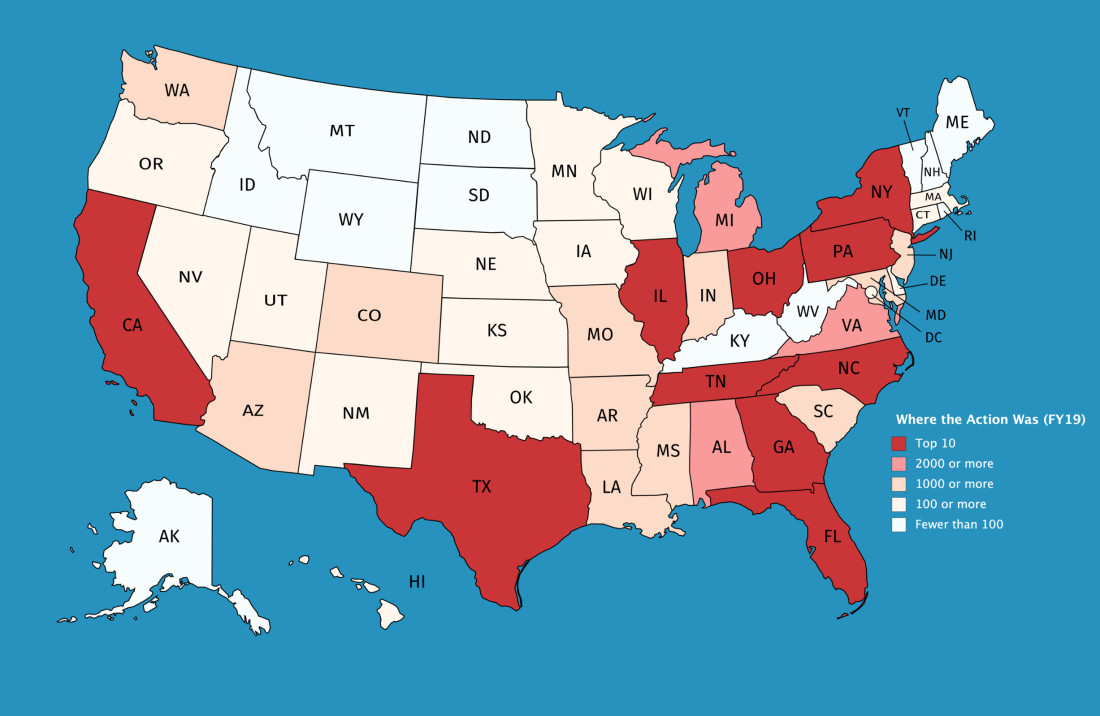 The redder the state, the more EEOC charges it had. In case you can't read the key, here it is:

Now you know where to build your new plant.