By Robin Shea on 9.16.11
Posted in Americans with Disabilities Act, Discrimination

I feel as if all I ever do these days is write about the Americans with Disabilities Act, but what else can I do? In the last six weeks, the Equal Employment Opportunity Commission has filed 21 lawsuits -- count em, 21! -- against employers alleging disability discrimination.

This is in addition to the $20MM settlement with Verizon (which I reported on earlier), not to mention a record high of ADA charges in fiscal year 2010, the most recent year for which statistics are available. 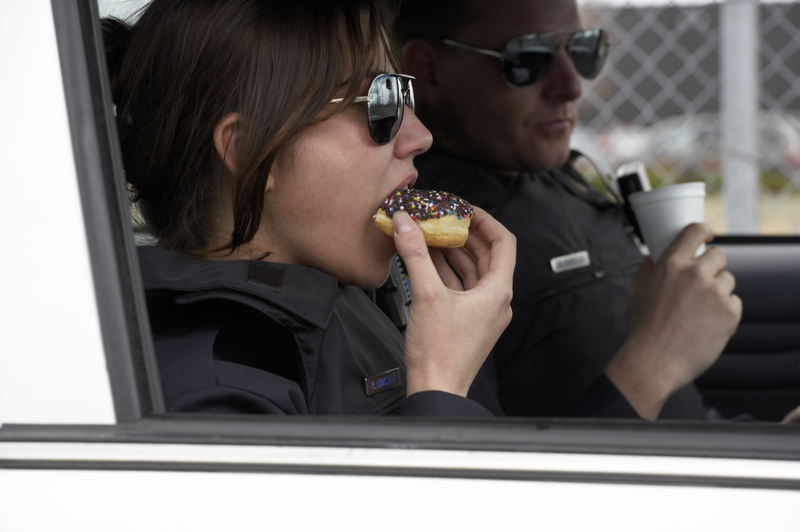 The EEOC is clearly feelin' frisky and also, if not trying to get a fast buck through pre-lawsuit settlements, trying to get some court precedent expansively defining who is disabled (yes, even more expansive than the plain language of the ADA Amendments Act, which is pretty flippin' expansive already) as well as an employer's obligations to make reasonable accommodations.

Many of these employers have sought to cut their losses, including but not limited to* Verizon (which agreed to the $20MM pre-lawsuit) and Starbucks Coffee Company (which agreed to pay $75,000 to the dwarf barista who was terminated only three days after being hired because she needed a stepladder or stool behind a busy counter where she and her fellow baristas ferried piping hot lattes hither and yon).

But some employers are hanging in there for now, and I hope they'll continue to do so. I'm not at all convinced that the courts will agree with some of the extreme positions being taken by the EEOC.

Meanwhile, I thought it would be fun on this Friday to play detective by deducing the arguments that the employers will make in their defense and predicting the outcomes of some of these contested cases.

Because these lawsuits have been filed only recently and the employers have declined public comment, actual details are not available. Accordingly, I will report the EEOC's side of the story based on its press releases and will "fill in" what I expect the employers' sides to be. I will then make my best prediction (i.e., "guess") based on that. In other words, don't take this seriously.

(Cue up Perry Mason theme song. Would that be a sweet ring tone, or what?)

Walgreen: The Case of the Pilfered Potato Products. (I wanted to entitle this one "All that and a bag of chips," but another blogger beat me to it.) This case has received more publicity than the others, but Walgreen has nonetheless declined to comment.

According to the EEOC, a cashier who was diabetic grabbed a store merchandise bag of potato chips worth $1.39 and ate them to stave off low blood sugar. She paid for the chips "as soon as she was able to do so." (In other words, she didn't pay for them promptly, even though she was at the cash register.) She was fired, presumably for stealing store product. As we all know, diabetes is now a "disability" within the meaning of the ADAAA. Walgreen should have accommodated her medical-emergency need for a bag of potato chips.

I expect Walgreen's defense to run something like this: As a retail employer, we have to be vigilant about theft of store product, aka "inventory shrinkage," which causes us to lose $X billion a year. This employee knew that theft in any amount, no matter how small, was ground for immediate discharge, and it's in our employee handbook, and we include it in new-employee orientation, and we have her signature on documentation showing that she was instructed about this upon hire. We were not aware that she was diabetic, but if she had problems with low blood sugar, she should have brought snacks with her to work so that she could nibble when she needed to do so. If this was unexpected, she should have eaten our chips and then promptly paid for them, since she was already stationed at the cash register and had her purse right there under the counter. If her purse was in her locker, she should have immediately notified the manager on duty or a co-worker that she'd eaten the chips and would pay for them as soon as she could get to her purse. She also could have placed a handwritten "IOU" in the cash register. She did none of these things, and we caught her on video eating the chips. She paid for the chips only after we confronted her about it, and at that point it was too late.

So, who wins? Assuming Walgreen can prove what I've just said, my vote is for Walgreen. On the other hand, if it turns out that the cashier really had no way to get to her money and no way to notify someone else that she'd eaten merchandise without paying for it, perhaps the EEOC has a chance.

McDonald's: The Case of the Despicable Demotion.

According to the EEOC, when a new company took over management of a McDonald's franchise in California, it demoted a floor supervisor who had cerebral palsy to janitor, cutting his pay and hours, even though the former supervisor was performing well.

I expect the franchisor's defense to run something like this: This employee's disability had nothing to do with his demotion. We got in there and found that the former franchisor had made a complete mess of things, and we had to make a lot of changes. We did a general restructuring, and this guy was only one of 20 supervisors we demoted. We offered to let him flip burgers or do fries, but he told us that the janitorial job was safer because of his condition (less risk of being splattered with hot oil). We explained to him that we didn't need a full-time janitor, but he chose that anyway, so we were like, Fine. Then he quit because he wasn't making enough money as a part-time janitor.

So, who wins? At this very preliminary stage, I would go with the EEOC. Regardless of what the law says, the burden will rest heavily upon the franchisor to prove that this individual was not demoted because of his cerebral palsy. If it can do so, and if its case is as I've predicted, then the franchisor should be able to win summary judgment. Otherwise, it's a jury trial, and the franchisor can expect to be creamed for (allegedly) picking on a guy with cerebral palsy who, at least according to the EEOC, was well liked by his bosses and co-workers and a good worker. A few years ago, Walmart was clobbered in a case where a pharmacy employee with cerebral palsy was demoted to collecting shopping carts in the parking lot.

Bank of America: The Case of the First-Day Firing

According to the EEOC, BOA hired a data entry clerk who was legally blind and then fired him after one day on the job without trying to accommodate him by offering, for example, a larger monitor, larger font sizes, or anything else. BOA knew he was impaired.

I expect BOA's defense to run something like this: Darn right we knew he was impaired, and we were fine with that. We know our obligations under the ADA, and we comply with them and make reasonable accommodations gladly. In fact, the individual who hired this guy was the same individual who fired him after his first day on the job, which proves that he was not discriminated against because of his disability. Regarding font size, all he had to do was go to "View" on the toolbar and select "Zoom In," and he could have had fonts as big as a house. We also would have been willing to provide a larger monitor if we'd needed to. But in this guy's case, he came to work and spent the whole day eating potato chips (albeit not stolen), talking to his girlfriend on the phone, and doing his nails. Based on that, we determined that he would not work out in this job.

So, who wins? Because of the "same hirer, same firer" rule (scroll to "Sign No. 1"), my money is on BOA. I think this defense is very likely to apply, just because the guy was fired so soon after he was hired. On the other hand, if the EEOC can show that Supervisor A hired the employee but that Supervisor B fired him without considering accommodations, then the EEOC may prevail.

Goodyear: The Case of the Woozy Worker

According to the EEOC, the employee was cleared by two physicians to work as a tire builder even though she had menorrhagia. After about a month on the job, she disclosed her condition to her supervisor and was terminated at some point afterward because of the company's "unfounded belief that she was substantially limited in remaining conscious and working."

I expect Goodyear's defense to run something like this: We understand our obligations under the ADA, and we comply with them. But get real. First, being conscious is an essential function of the job. Duh. This lady worked in an area with heavy machinery and hot, molten rubber, for cryin' out loud. She reported her condition to her supervisor only after she was put on a final warning for leaving her work area without authorization. It is not safe for a person who has dizzy spells to work around heavy machinery and hot rubber, and because of our production needs, we cannot let employees leave the work area whenever they feel the need to. Even though two physicians cleared her to return to work, she obviously did not feel that she was safe in this work environment, and under the circumstances we had reason to believe that she was a direct threat to herself and to her co-workers. We did look for other vacant positions that she might perform, but the only vacancies we had were in the front office, and she has no data entry skills and only a tenth-grade education, so she did not qualify.

So, who wins? This is a tough one to call. Goodyear's anticipated defense sounds pretty strong, but I made up almost all of it, so it's also possible that the EEOC is right. I will call this one a "draw" until we get more details.

In related news, it was reported yesterday that the EEOC has been appropriated "only" $359 million for fiscal year 2012, a cut of $7.3 million from fiscal year 2011. So maybe the EEOC will be a little easier to deal with in the future.